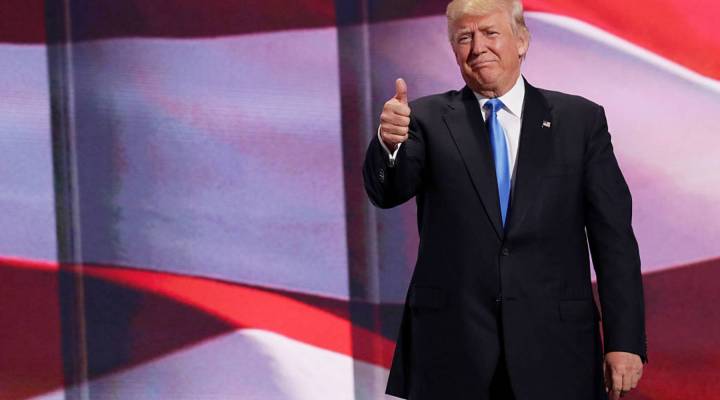 COPY
Republican presidential nominee Donald Trump gives a thumbs up to the crowd at the Republican National Convention on July 18, 2016 at the Quicken Loans Arena in Cleveland, Ohio. Chip Somodevilla/Getty Images

Republican presidential nominee Donald Trump gives a thumbs up to the crowd at the Republican National Convention on July 18, 2016 at the Quicken Loans Arena in Cleveland, Ohio. Chip Somodevilla/Getty Images
Listen Now

Today, Donald Trump will accept the RNC’s nomination as their candidate for the presidency. Yesterday, in an interview with David Sanger and Maggie Haberman at the New York Times, Trump expanded on his views on foreign policy. Sanger, the national security correspondent for the Times, asked Trump whether members of the 67-year-old North Atlantic Treaty Organization (NATO) could count on the United States meeting its treaty obligations for mutual defense.

“If they fulfill their obligations to us, the answer is yes,” Trump said, referencing monetary obligations.

There’s a surprising amount of economics in this interview to unpack, so we called Sanger to talk about it.

On Trump viewing foreign policy as a zero-sum game:

It’s a series of transactions for him, and that’s to be expected if you spent your entire life as a developer where most things are a deal and most deals depend on the money that’s transferred. He said, “why would we spend the money on troops if we are running trade deficits with these kind of countries?” The traditional thing that one would expect to hear in the foreign policy world — which  is that we have our own national interests in wanting to keep peace in the world, have troops forward deployed, have the influence that comes with that — does not seem to rank with him. He basically says, “that’s nice, but we can’t lose money doing it.”