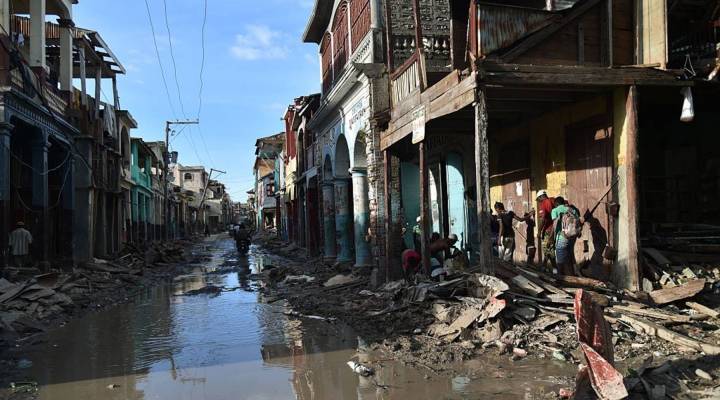 The people of Haiti are facing widespread destruction, fresh water shortages and fears of another cholera outbreak after Hurricane Matthew ravaged the country last week. As of Sunday, the death toll climbed to more than 1,000, while an estimated 350,000 are in need of emergency assistance.

While these figures are already daunting, the country’s officials and foreign aid groups are preparing for things to get worse. Haiti already has a fragile infrastructure and a lack of resources to stop the spread of disease.  Just look at the country’s last big natural disaster.  Approximately 55,000 people are still displaced six years after an earthquake hit Haiti in 2010.

After Hurricane Matthew’s landfall,  61,000 people were seeking refuge in shelters, according to Haiti’s Civil Protection Department. The U.N. reported that 80 percent of buildings in the southwest town of Jeremie were destroyed during the storm. According to the Haitian government, 2,700 homes were destroyed in the country’s hardest hit region.

The cost of the damage is currently estimated at $1 billion, which is the equivalent of 11.4 percent of the country’s GDP. However, estimates are expected to change as assessment of the damage continues.

Jonathan Katz, author of “The Big Truck That Went By: How the World Came to Save Haiti and Left Behind a Disaster,” said it’s hard to determine how much that cost will go up. In 2010, the estimated cost of the earthquake varied between $8 billion and $14 billion.

“There are so many different ways you could calculate the number, and there aren’t good censuses, insurance figures or property lists anywhere to base it on,” Katz wrote in an email. “It’s also impossible to say how much is needed in foreign aid.”

The Red Cross launched an “emergency appeal” for $6.9 million in order to provide medical care and assistance to 50,000 people in southwest Haiti following Hurricane Matthew. The U.N. made a similar emergency appeal for $120 million in aid, while it’s subsidiaries — the World Food Programme and UN Children’s Fund (UNICEF) are also set to provide support on the ground. The United States Agency for International Development (U.S. AID) made $1.5 million in immediate aid available to central Caribbean countries affected by the hurricane.

“The amount of foreign aid is less important than the kind, which needs to be directed toward Haitian institutions, both in civil society and government (such as it currently is), and put directly in the hands of the Haitian people themselves,”Katz wrote.

The UN estimated response in foreign aid to the earthquake in 2010 totaled about $9 billion. However, questions still linger about how it was spent.

According to Katz, “93 percent of the humanitarian relief money spent after the earthquake, globally, stayed in the donor countries, the UN system or the Red Cross. Six percent couldn’t be traced. Just one percent went to the Haitian government.”

Listen to our full interview with Katz about Haiti’s complicated history with foreign aid.