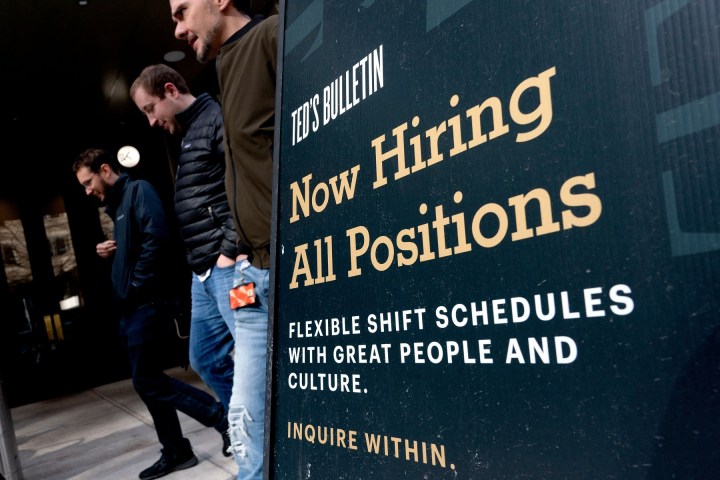 Although the U.S. unemployment rate has fallen below 4 percent, many companies have continued to report challenges finding staff. Stefani Reynolds/AFP via Getty Images

Although the U.S. unemployment rate has fallen below 4 percent, many companies have continued to report challenges finding staff. Stefani Reynolds/AFP via Getty Images

While the economy is recovering, the number of jobs still available has been a cause of concern for the Federal Reserve. Chairman Jerome Powell recently pointed out there were 1.7-plus job openings for every unemployed person. According to the latest data from the Labor Department, there are 11.3 million job openings in total.

“So that’s a very, very tight labor market — tight to an unhealthy level, I would say,” Powell said during a press conference after the Fed raised interest rates last week. “We’re hearing from companies that they can’t hire enough people.”

One job opening per job seeker is the ratio that would likely result in stable wages and prices, according to Jorgen Harris, an assistant professor of economics at Occidental College. We reached this ratio for the first time in 2018 (the government began collecting data on job openings in 2001).

Inflation has been hitting record highs in recent months, with consumer prices rising 7.9% in February compared to the same time last year, the fastest pace in 40 years.

Labor economists and researchers say the lack of robust child care infrastructure, low wages, poor working conditions and the health issues associated with long COVID may be preventing some people from returning to work. Millions of Americans have also retired early in the last two years.

Veronika Dolar, an assistant professor of economics at SUNY Old Westbury, pointed out “a major gender difference” among those who have re-entered the labor force.

Dolar said that while women are down nearly 1.5 million jobs since February 2020, the number of employed men has increased.

Some women may be struggling to find child care due to daycare closures, she explained. On top of that, rising gas prices may make it difficult for them to commute to their jobs, and the pay may not be that great in the first place — all factors that would deter them from accepting these jobs, Dolar said.

Overall, the quits rates are highest in sectors such as manufacturing, leisure and hospitality, and retail trade, as recently charted out by Nick Bunker, an economist for Indeed.

Harris at Occidental said the amount of unfilled jobs out there means employers will have to decide: “Do I make do without this person that I wanted to hire? Or do I try to offer better wages or better benefits?”

“As a labor economist, I don’t think that’s a bad thing,” Harris said, adding there was strong wage growth “for the lowest-wage workers” in this tight labor market.

In 2021, the country’s lowest-paid workers experienced an 8% increase in earnings, based on calculations from Arindrajit Dube, an economist at the University of Massachusetts Amherst.

Harris pointed out that workers in the U.S., especially those who earn low wages, experienced extremely low wage growth for the past 40 years, particularly in the past two decades.

The Pew Research Center found that real average wages in 2018 had the same purchasing power they did in 1978, while wage increases have primarily benefited the highest earners. Between 2000 and 2018, weekly wages rose 3% for workers “in the lowest tenth of earnings distribution” vs. a 15.7% increase for those in the top tenth.

A strong economy doesn’t mean companies should automatically be able to hire whomever they want, Harris said, “especially when we’re talking about human beings’ time and effort.“

“If you want to find employees and you can’t, that implies that the job you’re offering is worse than the job somebody else is offering,” Harris added.

In our current inflationary environment, Dolar noted, costlier goods may actually end up pushing more people back into their labor market, with “very strange opposing forces” affecting workers. On the one hand, they have to deal with rising prices, but their jobs may lead them to incur higher bills for expenses like transportation.