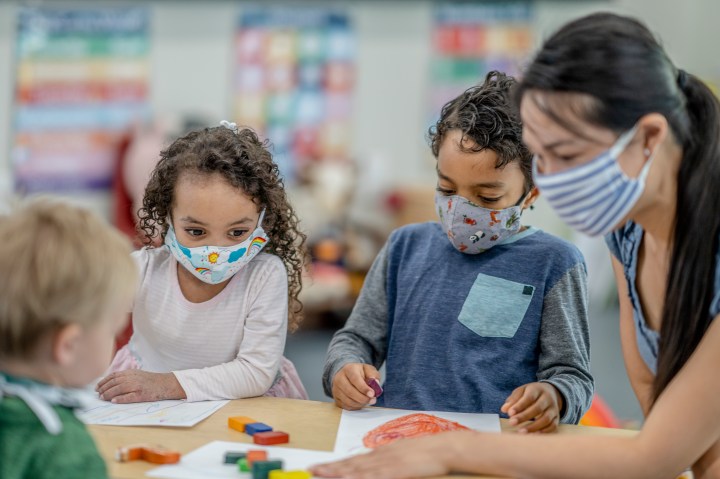 It can be hard to find child care providers because of the low pay and lack of benefits. FatCamera/Getty Images
I've Always Wondered ...

It can be hard to find child care providers because of the low pay and lack of benefits. FatCamera/Getty Images

Why are there such long waitlists for quality child care? People want it, so why doesn’t the market respond to the demand with greater supply?

Peg Horner began searching for a daycare center for her son Kai in the summer of 2020, just a few months after she got pregnant with him. The Madison, Wisconsin, resident remembers visiting one facility and discussing options with a staff member in a memory that she says is now “seared into my brain.”

“She asked me, ‘When did you need your placement?’” Horner recalled. After Horner mentioned that she was set to go back to work in May 2021, she was told the facility didn’t have any spots open until January 2022.

She was shocked. “They always tell you about all the things you wish you would have learned before you had a baby,” Horner said.

Knowing how long daycare waitlists can be, she said, is something she would have liked to know.

After looking at about 25 facilities in a stressful search, she eventually found one who let her know they’d let her off the waitlist about a month before she delivered. But what if she and her husband couldn’t find a spot for their son?

When you zoom out, you can see how circumstances like these reverberate throughout the economy. Between August and September of last year, 1.1 million people dropped out of the labor force.

This, Horner said, is the reason why. “You can’t just not have child care.”

From any vantage point, parents, the child care providers themselves and the experts who study this industry agree that something is fundamentally wrong.

Caitlyn Collins, an assistant professor of sociology at Washington University in St. Louis, said that there’s a shortage of providers in the industry, leading to these long waitlists.

Low wages and a lack of benefits are a primary obstacle throughout the country in recruiting staffers — the national median average in 2019 stood at just $11.65 an hour, or $24,232 full-time per year. A disproportionate amount of these child care providers are also women of color.

Collins also noted that the ratio of a caregiver to child varies based on the age of the child, and that the youngest kids require the most intensive care.

“That means that a given care provider can’t watch very many kiddos at one time safely,” she explained.

While the ratio requirements depend on the state, program and exact age, guidelines from ChildCare.gov say that one trained adult should not care for more than 3 to 4 infants (those younger than 12 months).

Taryn Morrissey, an associate professor of public administration and policy at American University, said this operates in contrast with, say, a college classroom where a professor can oversee many students.

“If you break it down, one-third or one-quarter of that person’s salary is paid for by an individual family, plus all the other overhead, like rent and supplies,” Morrissey said of the providers looking after three to four infants at a time. “It gets quite expensive quite quickly — and that means that child care providers don’t really have a market incentive to enter.”

The effects of the COVID-19 crisis

Eighty percent of child care centers report they’re experiencing a staffing shortage, according to a June–July 2021 survey from the National Association for the Education of Young Children.

As a result of these staffing challenges, the NAEYC says that one-third reported a longer waitlist or are unable to open, and that 24% have reduced their operating hours.

A Child’s World Learning Centers, which has four locations in North Carolina, has been dealing with a shortage of child care workers for the past four or five years, according to its chief operating officer Lauren Hayworth.

But the COVID-19 crisis has made the issue exponentially worse.

Hayworth, who’s also the president of the North Carolina Licensed Child Care Association, explained that some staffers caught the virus and decided not to return, or were afraid of catching the virus, among other potential reasons. (The facilities themselves had taken precautionary measures, such as only allowing children and staff in their buildings.)

She’s seen some workers head to the public school system, which she said can offer teachers state benefits that ACWLC can’t because it’s a small, private company.

Most of these daycare locations can hire up to 30 staffers, but right now, the number of staff they have ranges between 15 and 24. The shortage has led some locations to now operate on reduced hours.

Hayworth said it would be difficult to raise hourly rates and keep tuition at the level it’s at. (The average cost of child care in the U.S. stands at $8,355 a year per child.) She noted that the centers’ staffers can make between $10 and $17 an hour, which is dependent on their education level.

Kayla Arruda, a former early child care teacher who now works as the director of a preschool center in Rhode Island, said she initially left the early child care field back in 2019 because of burnout.

“I was not making enough money to justify the amount of effort I was putting in every day,” Arruda said, noting that she would come home exhausted.

In an interview with Marketplace host David Brancaccio, KPCC reporter Mariana Dale said some child care providers she’s spoken to have also made financial sacrifices for the families they’re caring for.

“I’ve talked to providers who are going out to Target and spending their own money to provide this for families. They are taking food out of their own pantries to feed these families,” Dale told Brancaccio.

As a result, some aren’t putting their money in retirement savings or can’t pay for health care. On top of these expenses, Dale said that providers also had to purchase items like masks and protective equipment during the pandemic.

Many of the employees and daycare operators who remain in the field do it for the love of the job. Although Arruda left and at one point worked as an HR manager for a retail establishment, she couldn’t stay away from it for long.

“I missed working with kids. It called back to me,” Arruda said. “I’m very excited to be back in the field. But I’m very aware it’s definitely not the highest paying field out there, unfortunately.”

The system can seem like a paradox: parents spend thousands of dollars, while the workers looking after these children receive insufficient salaries.

“It’s a perverse result of families having to privately finance this expensive period of education,” Morrissey said. “K-12 education is universally available publicly. But from [ages] 0 to 5, families are on their own.”

The Biden administration has acknowledged the low pay in child care, and announced in April that it plans to raise the minimum wage for early child care staff to $15 an hour for those in pre-K programs and Head Start, a federal program for children up to age 5 from low-income families.

Collins said that the U.S. is one of the only wealthy Western countries in the world that doesn’t have a universal child care system available to all families on a federal level.

But she pointed out that individual cities and counties, such as Washington, D.C., have spearheaded their own programs.

Hayworth said she wants those who work with young children to be treated as professionals — working in this field should be about cultivating a career, not a stepping stone to another job. She would also like more support from the state so that her workers can access better benefits, like a retirement plan and less expensive health insurance plans.

“I have people that work for me who wouldn’t even be able to afford for their children to come to our schools,” Hayworth said.

Collins said caregiving in the U.S. is deeply feminized. Jobs with workforces that are majority-female tend to pay less than jobs with predominantly male workforces, according to the Center for American Progress. We think of jobs related to care as work that women can do naturally, according to Collins.

“But caring is a skill,” she said. “Upgrading the conditions and the wages in these jobs is absolutely critical for getting more people into caregiving roles.”