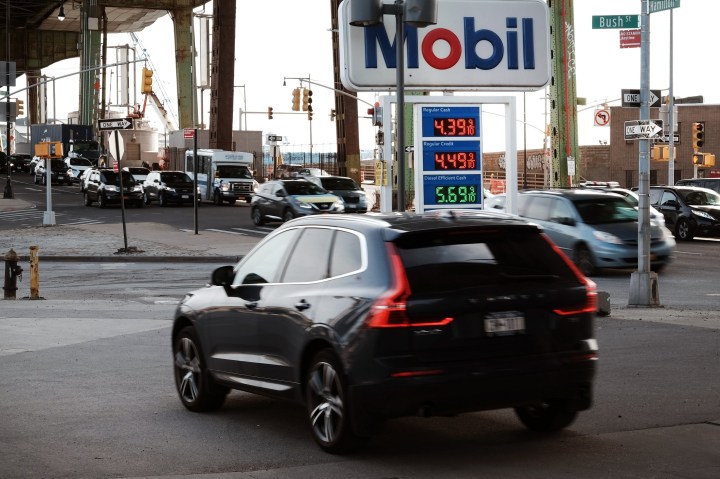 During that week, Brent oil jumped to more than $130 a barrel, while West Texas Intermediate topped $123.

But now that the price of crude oil has begun dipping below $100 a barrel, gas prices have been slower to respond. The average price of gasoline dropped by a penny earlier this week, eventually sliding by a few pennies later in the week.

This phenomenon — quick gasoline price increases and slow gasoline declines in response to crude oil price changes —  is known as “rockets and feathers.”

Haresh Gurnani, a professor of operations and supply chain management at Wake Forest University, said the ability for gas stations to do this comes down to the classic answer of: “Because they can.”

Gurnani explained that gas stations are not willing to lower prices just because crude oil is cheaper because they can’t anticipate what oil prices will look like in the next few days or weeks.

“They would rather take advantage of the consumer getting used to those elevated prices,” Gurnani said. “Now, if there is some predictable reduction in prices, then they can afford to pass on some of their savings to the consumers.”

When gas stations set their prices, they have to keep in mind that they’ll have to replace the fuel they’re selling, according to Dan Scheitrum, an assistant professor of agricultural and resources economics at the University of Arizona.

So if the price of gasoline skyrockets tomorrow, but stations sold all of their gasoline today at a significantly cheaper price, they may have trouble funding their replacement purchases, he explained.

At the local level, gas stations try not to reduce prices too much, because if one lowers theirs, others will have to follow suit in order to remain competitive, Gurnani said.

He added that as the price of oil begins to steadily decline, there’s a higher possibility that one gas station will decide to price its gas lower, putting pressure on its competitors to do the same.

A gas station might decide it’s time to lower prices when there’s a steady decline in oil prices over a period of two weeks or so, Gurnani said.

He noted that the age of the gasoline that stations are holding will vary from market to market. For example, if certain markets are closer to storage facilities, they’ll hold less amounts, Gurnani said.

“Whereas if they are located further away, then they are inclined to lock in larger quantities,” he added.