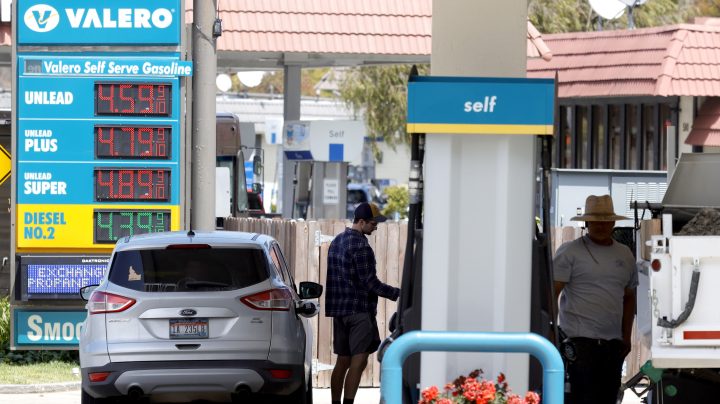 West Texas Intermediate and Brent crude, both major indexes, were up for the fourth day in a row. The price for a barrel of oil is now hovering close to $90.

But many don’t believe it’s going to stop there. Goldman Sachs expects oil to hit $100 per barrel this year as the pandemic wanes, demand comes back and supply can’t seem to keep up.

As we inch toward that psychological benchmark, it seems those prices at the pump aren’t going to miraculously come down anytime soon.

Unlike a lot of stuff in this economy, we can break the price of oil down to the basics.

“It is ultimately about supply and demand,” said Mark Finley, a fellow at Rice University’s Baker Institute.

“The market is very tight now. Hopefully, at least from a consumer perspective, however, help may be on the way,” Finley said.

Help in the form of countries like Saudi Arabia bringing more oil back onto the market, which has been lagging.

“Even OPEC countries have found that it’s more difficult than they anticipated to reduce production and then just boom, start it back up,” said Robert Kaufmann, a professor at Boston University’s Earth & Environment department.

According to Kaufmann, producers in the U.S. could also help with supply, if they’re willing. Many have been reluctant because they’re skeptical these prices will stick around — also because of environmental commitments from investors supporting a transition to cleaner energy, but Kaufmann doesn’t buy that part.

“I don’t think what you’re seeing now has anything really to do with, ‘the transition,’” Kaufmann said.

He thinks what we’re seeing in the oil market right now is about COVID-19.

Supply couldn’t shut down fast enough at the start of the pandemic, and now it can’t keep up with reemerging demand.

Policymakers can also try to dampen oil demand. But according to Sara Vakhshouri, president of SVB Energy, that’s the scarier part of the equation.

“If Biden’s administration and U.S. Federal Reserve decides to control inflation, if they hit the breaks very fast, then we’re going to have a severe economic slowdown,” Vakhshouri said.

Instead, Robert Johnston at the Columbia University Center for Global Energy Policy said policymakers should be focusing on incentivizing a demand shift.

“If overall energy demand is down because of recession and high prices, that’s sort of one thing. If the economy is growing and people are switching to alternative fuel technologies, that’s kind of another,” Johnston said.

He said the difficulty for the Biden administration is that it wants to appear focused on climate change, but also wants to secure oil and gas supplies to keep prices low at the pump.

According to Johnston, that’s not only a tough balance to strike, but an even tougher political message to articulate to voters.

A Warmer WorldCOVID-19
Tags in this Story
Share this Story