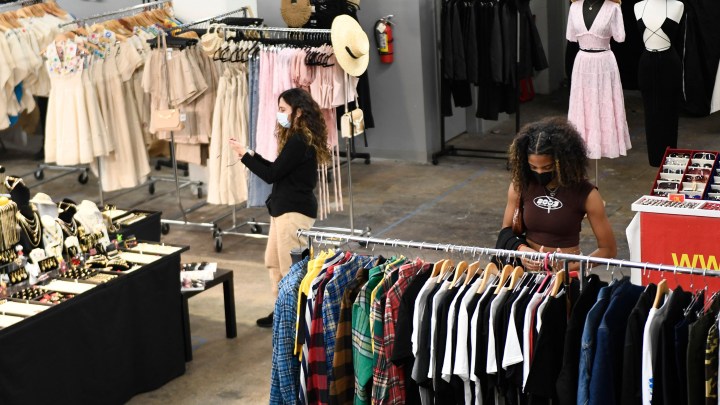 COPY
Not adjusting for inflation, retail sales in February were up just 0.3% over January. Factoring in inflation, they were actually down. Patrick T. Fallon/AFP via Getty Images

Not adjusting for inflation, retail sales in February were up just 0.3% over January. Factoring in inflation, they were actually down. Patrick T. Fallon/AFP via Getty Images
Listen Now

The U.S. Census Bureau announced retail sales numbers for February on Wednesday and … they weren’t great.

For much of the last year, retail sales have been a lot like a bouncing ball, said Mark Cohen, director of retail studies at Columbia Business School. “One month is great, everybody’s goofy and giddy about the prospects, and the next month is a big disappointment.”

“I think this is a manifestation of the ongoing, remaining instability as we try to come out of COVID,” Cohen said — and not so much a sign that people are changing their habits because of rising prices. “I think the inflation effect on retail sales is really yet to be seen.”

People did spend less on certain things in February — “things like furniture and some household goods,” said Dana Peterson, chief economist at The Conference Board.

Peterson said some of that was likely people reining it in a little after buying a lot in January, and some of it was probably that, after omicron peaked, they were more eager to go out than to shop.

“We saw a real strength in people going to bars and restaurants,” she said.

That’s one of the first things people stop doing when they’re really worried about money and rising prices, according to Bankrate’s Ted Rossman.

“A lot of people still have pent-up demand, increased savings,” he said. “I think pent-up demand may end up winning over inflation.”

In survey after survey, though, people are saying they’re worried about inflation. “But what’s so interesting is this kind of disconnect. Because really, ever since last summer, consumer confidence has been poor,” Rossman said.

So far, he added, retail sales have held up a lot better than consumer confidence.