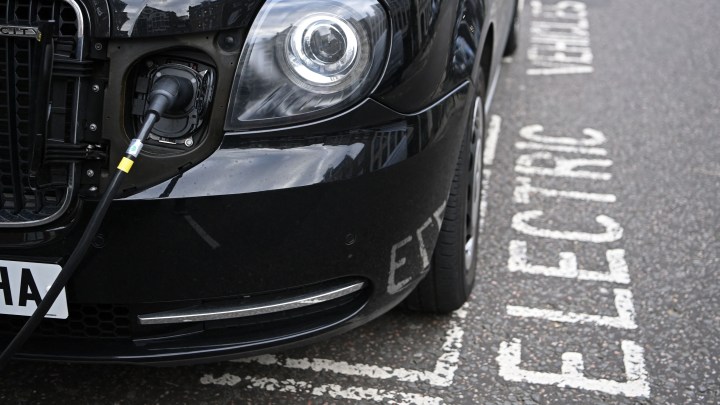 COPY
While automakers are investing in alternative-fuel vehicles, they’re likely betting that the demand shift to electric vehicles will be more gradual. Daniel Leal/AFP via Getty Images

While automakers are investing in alternative-fuel vehicles, they’re likely betting that the demand shift to electric vehicles will be more gradual. Daniel Leal/AFP via Getty Images
Listen Now

If you have a friend or a family member who drives a hybrid or an all-electric vehicle, you probably know what that person’s spending on gas right now … not that they’re rubbing it in, or anything.

While those prices at the pump have a lot of folks considering a move away from a traditional combustion engine vehicle, finding an electric vehicle or a hybrid is no easy task right now.

As an engineer who studies alternative fuel vehicles, you’d think Camron Proctor would be one of those guys who is all humble-braggy about how many miles per gallon he’s getting right now.

He considered a Toyota SUV hybrid the last time he was in the market for a car in 2016, but the sticker price was too high. He went with a used Chevy Equinox — a compact SUV — and he got the EcoBoost model, which has a bit better fuel efficiency but isn’t a hybrid.

Gas also wasn’t $5 a gallon back then. These days? “I look at something like the Highlander Hybrid because I have a kid and I have dogs. You know, and it’s getting 30 miles in the city, it has 306 horsepower,” Proctor said. “You know, if you do have that kind of disposable income, part of me says, ‘Why not?’”

That’s a calculation many Americans are making right now. Stephanie Brinley, a principal analyst at S&P Global Mobility, thinks we’ll eventually see a big shift to electric vehicles but that won’t only be about the price at the pump.

“It’s not about the fuel price in and of itself,” she said. “It’s going to be because the vehicles are increasingly in price points and segments, in size classes that already fit into consumers’ lifestyles.”

Automakers are investing in and promoting their next-gen alternative-fuel vehicles, but they’re not producing a whole lot of them yet. It’s also more likely that carmakers are counting on the demand shift to electric vehicles being a lot more gradual, according to Sam Fiorani, vice president of global vehicle forecasting at AutoForecast Solutions.

More than the chip supply problem we’ve heard all about, he said, the lack of EVs for sale right now is due to the normal pace of production.

And for those customers who are ready to make the switch — and can find the EV that they want — there’s not a lot of negotiating happening at the dealership, said Chris Harto, a senior policy analyst at Consumer Reports.

“You have a kind of set supply of EVs that are going to be built this year. And increasing demand for that limited number of vehicles, and it’s translating into higher dealer markups for those vehicles,” he said.

And the higher those markups, the further down the road it’ll be before customers start to see those savings from plugging in rather than filling up.