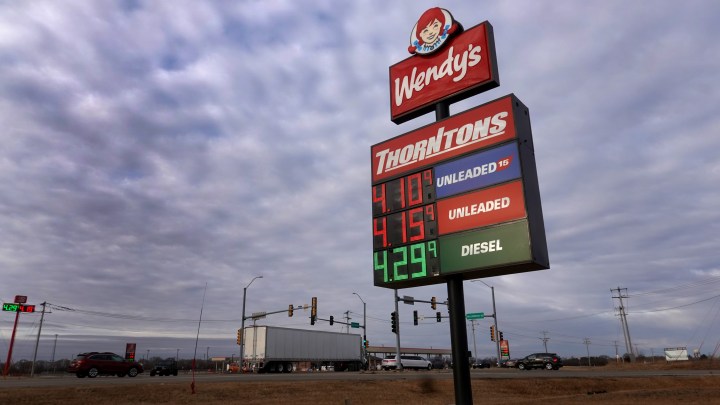 COPY
Even if the federal gas tax is paused, there's no guarantee those savings would be passed on to consumers. Scott Olson/Getty Images

Even if the federal gas tax is paused, there's no guarantee those savings would be passed on to consumers. Scott Olson/Getty Images
Listen Now

Another day, another record high for gas prices — at least when you don’t adjust for inflation. AAA reports the average cost for a gallon of regular unleaded reached $4.25 today, up about 8 cents from yesterday.

That “Putin price hike” the president talked about has prompted the governors of Colorado, Michigan, Minnesota, New Mexico, Pennsylvania and Wisconsin to call on Congress to suspend the federal gas tax.

Blue and red states are also looking at easing the impact of their own gas taxes. But would that really make a difference?

The federal gas tax hasn’t increased since 1993. No matter where you live, it’s 18.3 cents per gallon. Suspending the tax wouldn’t save drivers all that much money, according to Howard Gleckman, a senior fellow at the Tax Policy Center.

“Do the math — it’s about $100 bucks a year in savings, or about 30 cents a day.” And that’s assuming all those savings would get passed on to consumers. “What’s more likely to happen is that oil companies will simply keep some of the tax cut themselves,” he said.

A gas tax holiday proposed by some congressional Democrats tries to curb oil company windfalls, but Gleckman is skeptical that it’s enforceable.

And while savings at the pump may be relatively small, you could drive a Hummer through the hole it would leave in the federal infrastructure budget.

“It would be about a $20 billion hit on the transportation trust fund,” said Robert Puentes, president of the Eno Center for Transportation.

That’s the main source of money for fixing roads, bridges and subways, and a gas tax holiday for the rest of the year would cut it in half, Puentes said.

There’s also a bigger question: Do we really want gas to be cheaper?

“As we’re trying to build cleaner vehicles, cleaner infrastructure, the gasoline tax on the federal and state levels is a big component of that,” Puentes said.

But those state gas taxes can be sizable. In California and New York, for example, it’s about 50 cents a gallon.

It’s important to remember that gas taxes are regressive, hitting poorer households more than richer ones, said Adie Tomer, a senior fellow with the Brookings Institution.

In his mind, a holiday could help those who need it most. “What we expect is to see lower-income households have a little bit more scratch in their budget during times of real inflationary pressure.”

Infrastructure funding could come from other sources outside the pump, Tomer added. As cars have become more fuel efficient, gas tax revenue has been flatlining anyway.