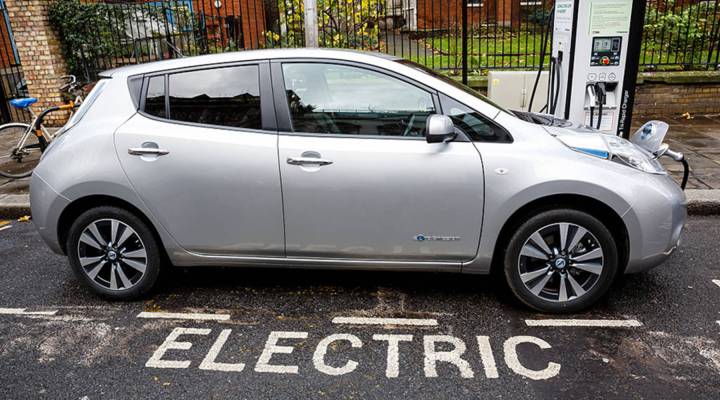 Norway’s government said more than half the new cars sold there last year were either all-electric or hybrid models. That’s compared to about three percent in the U.S.

Norway aims to phase out gas and diesel cars altogether. One way the country has made so much progress in its transition to electric cars is by offering big perks and privileges for electric vehicle owners.

Driving out of Oslo in the evening rush-hour, EV owner Jorgen Gilberg demonstrated some of those perks. When traffic started to back up, he simply swung into the bus lane. “This is totally legal for EV cars,” said Gilberg as we whizzed past several hundred stationary cars.

Gilberg also didn’t have to pay sales tax on his $117,000 Model X Tesla as EVs are tax free, and for him, that seemed like good value when he compared it to a low-end gas run family car with Norway’s hefty car tax, he said.

And, he said, running on electricity rather than gas is five times cheaper.

At the thousand-year-old fortress at the center of Oslo, EV drivers can open a gate with a free smartphone app to benefit from another perk.

“It’s actually I think the first parking garage for EVs only in the world,” said Sture Portvik, head of electric mobility at Oslo City Hall. “It’s free of charge. So you are parking for free, you have free electricity so it’s a very strong incentive,” Portvik said.

Especially as Oslo has started converting 20,000 free street parking spaces into free parking for EVs only.

Some are unhappy about Oslo’s very interventionist personal transport policy. In November, 4,000 people rallied in Oslo to protest a 74 percent increase in the toll charge on gas and diesel cars for entering – and leaving – the city.

Cecilie Lyngby, owner of a gas-powered Mini, organized the rally. EVs are problematic for many people, she said. For example, you can’t charge up at home if you live in an apartment block rather than a house with a garage.

“The rich people in Oslo now have electric cars for downtown, driving through the toll roads for free and the poor people, they can’t afford it,” she said.

Norway says it will stop selling gas and diesel cars altogether by 2025.