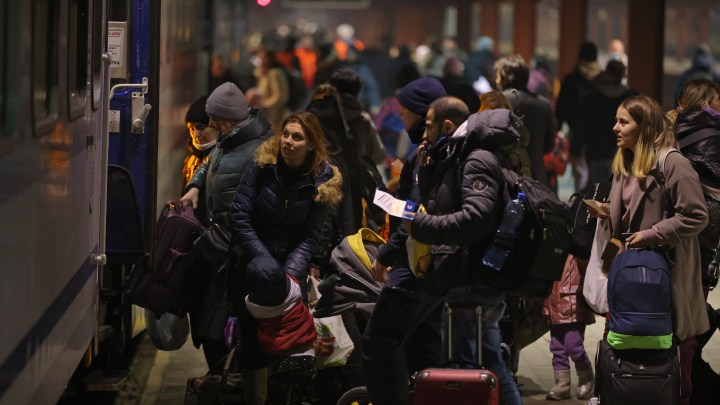 COPY
Ukrainians board a train bound for western Poland on Monday. The Biden administration has yet to formally welcome refugees to the United States. Sean Gallup/Getty Images

Ukrainians board a train bound for western Poland on Monday. The Biden administration has yet to formally welcome refugees to the United States. Sean Gallup/Getty Images
Listen Now

When Eric Schwartz visited Poland last week as president of the advocacy group Refugees International, he heard harrowing stories from Ukrainians who had fled across the border.

“One woman, her name was Nadia, showed us a photo of her children’s school, which had been completely destroyed,” Schwartz said.

Another said friends of hers had been shot and killed in their cars while trying to escape.

“A third woman in the town of Rzeszow told us of a bombing of a residential building next to hers, which occurred while she and her son hid in the bathroom of their home,” Schwartz recalled.

More than 2.8 million Ukrainians have left their country since the Russian invasion began, according to UNHCR, the United Nations refugee agency — streaming across the borders into Poland, Moldova, Romania and other Eastern European neighbors.

Schwartz said he was heartened by the response from Polish officials, aid groups and individual volunteers helping Ukrainians find temporary refuge in Poland and elsewhere in Europe. Under a Temporary Protection Directive, the European Union will allow Ukrainians to live and work in member states for up to three years.

The United States has pledged more than $4 billion in humanitarian aid to help Ukraine and other Eastern European countries cope with the crisis. Some refugees have already made their way to the U.S.-Mexico border, seeking asylum. While the Joe Biden administration has granted temporary protected status to Ukrainians who were in the United States before the invasion, it has yet to formally welcome refugees fleeing the war.

“I am sorely disappointed that this administration has not yet shown leadership to welcome Ukrainian refugees to the United States,” said Mark Hetfield, CEO of HIAS, a Jewish international refugee agency.

In 1999, when Kosovars were forced to leave their homeland during the Kosovo war, Hetfield said, “Vice President Al Gore went to Ellis Island and announced that the United States would take in immediately 20,000 Kosovar refugees, prioritizing those with family ties to the United States and making sure that they knew that they would be able to return to Kosovo when it was safe to do so.”

On Friday, President Joe Biden addressed the refugee crisis in a speech to the House Democratic Caucus Issues Conference in Philadelphia. “We’re going to welcome Ukrainian refugees with open arms if, in fact, they come all the way here,” he said.

After those remarks, HIAS and other Jewish organizations sent the president a letter urging him to share responsibility with Europe. Hetfield said the U.S. should actively bring refugees here.

“We need leadership right now, for the United States to demonstrate that we’re not just going to pat Poland and Slovakia and Hungary on the back for welcoming refugees, but that we’re willing to do some of that ourselves, especially for those refugees with close family ties in the U.S.,” Hetfield said.

There are many with those ties, said Hans Van de Weerd, senior vice president for resettlement, asylum and integration at the International Rescue Committee.

“There is a sizable Ukrainian community in the United States, and I think we expect to see family reunification,” he said. “We expect to see Ukrainians coming as a refugee or through other legal pathways and would also be ready to resettle them as well.”

The IRC and HIAS are among the nine agencies that have contracts with the U.S. Department of State to resettle refugees — a process that can take years and is typically viewed as a last resort. In an emailed statement, a State Department spokesman said “the Department will work with UNHCR, resettlement partners, and our overseas posts to determine whether Ukrainian nationals who have departed Ukraine require resettlement to a third country because they cannot be protected in their current location.”

Any influx would come as the U.S. refugee system is rebuilding from cuts during the Donald Trump administration and struggling to resettle tens of thousands of recent refugees from Afghanistan. In the face of an ongoing national housing shortage, Van de Weerd said, many are still waiting for permanent places to live.

“I really believe that the Afghan situation has shown that Americans want to receive refugees,” he said. “We just need to, I think, keep that up and not forget that even [though] there may be now a new crisis arising, that Afghans still need support.”