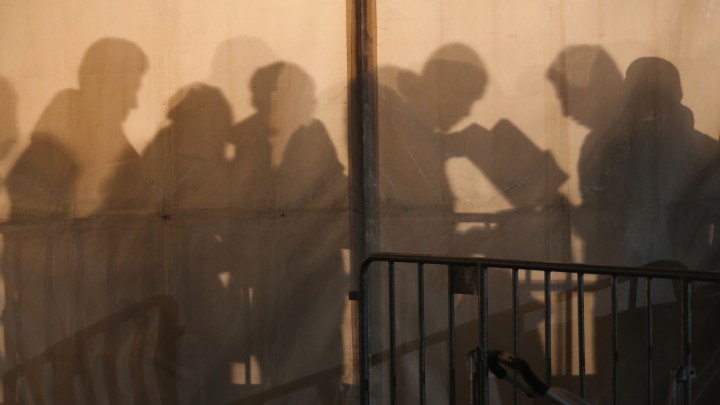 COPY
Migrants and refugees wait in the early hours in a tent outside the Central Registration Office for Asylum Seekers in 2015 in Berlin. Sean Gallup/Getty Images

Migrants and refugees wait in the early hours in a tent outside the Central Registration Office for Asylum Seekers in 2015 in Berlin. Sean Gallup/Getty Images
Listen Now

Some in Britain see refugees as a burden on society, a drain on public resources as they need welfare, language lessons and expensive taxpayer-funded health care. But a British charity is working hard to overturn this negative perception. The Entrepreneurial Refugee Network, or TERN, says refugees are a great economic asset for the United Kingdom. Many of those who have fled war or persecution are tough, educated and hardworking self-starters who could, with encouragement, set up their own businesses and become significant wealth creators.

Muna Abdi is a good example. As a teenager, she fled civil war in Somaliland in 1989, arriving in Britain with her mother and younger brother. Today she co-owns a thriving home care agency in Bristol, which employs 70 mostly full-time staff, a success that Abdi attributes partly to the “thick skin” she developed as a refugee.

“You become more resilient, which you need to be as an entrepreneur. The struggles and the hardship you go through make you stronger than other people,” she told Marketplace.

It wasn’t only the flight from Somaliland that toughened her up.

Her new schoolmates in England taunted and teased her as a displaced person.

“I hated it. I didn’t want to be a refugee. At first, I just wanted to go back to my country,” she said.

Today, she said, she is proud to be called a refugee, pleased to be a role model for more recent arrivals, and she believes that she is breaking down social barriers between her largely Somali workforce and her mostly white clients.

More than 140,000 refugees like her arrived in Britain from all over the world over the past decade, and many of them, according to the Entrepreneurial Refugee Network, could find a route out of poverty and segregation by setting up their own business.

“Our key message is that refugees thrive when they have self-reliance, self-determination and when they can contribute to society,” said Fred Kastner, TERN’s co-founder.

Kastner points out that well-paid employment is not always open to refugees, as often their qualifications aren’t recognized and too often the newcomers are left to languish on welfare.

“We estimate that if only 6,000 of them started a business here, the British government would save as much as half a billion dollars from getting people off welfare. There would be an economic boost from creating wealth and generating jobs for other people,” he said.

TERN has so far helped more than 150 refugee entrepreneurs, people from all walks of life. People like Usman Kalid, who fled the threat of religious persecution in Pakistan and now ekes out a living in Britain in various part-time roles, including that of occasional stand-up comedian. But Kalid is pinning his hopes on an enterprise that he created — with TERN’s help — last year.

“I have launched my own brand of fair-trade organic coffee. I called it Haven Coffee, coffee with a conscience,” Kalid said. He sells the product from a market stall and at special events across London and intends to plow some of his profits into training other refugees as baristas.

The refugee entrepreneurs’ motives are often mixed: altruism entwined  with self-interest. Take Amina Kadogo, who fled the mayhem in the Democratic Republic of Congo, sought asylum in Britain and is now, with TERN’s assistance, running her own small property rental firm on the outskirts of the British capital.

She aims to support an orphanage back home from her profits and to prove to the Brits she’s not a burden.

“Most people think these refugees are here to take our jobs and have the NHS [Britain’s taxpayer–funded health service] look after them. But if you can pay all your own bills and contribute, it’s a way of earning respect,” Kadogo said.

But she cheerfully admits she is a terrific sucker for branded goods and once lived on bread and tea for a couple of weeks so she could afford to buy a pair of designer boots.

“I love nice things,” she admitted, “and I think a big drive for me getting into business is so that I can buy nice things for myself.”