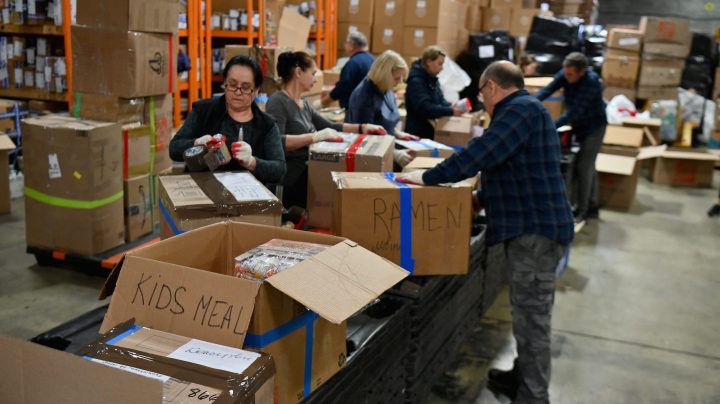 COPY
As the number of refugees from Ukraine increases, so does aid, and so do aid scams. Above, charity workers and volunteers in New Jersey pack boxes with humanitarian donations to be shipped to Ukraine. Angela Weiss/AFP Getty Images

As the number of refugees from Ukraine increases, so does aid, and so do aid scams. Above, charity workers and volunteers in New Jersey pack boxes with humanitarian donations to be shipped to Ukraine. Angela Weiss/AFP Getty Images
Listen Now

More than 2 million refugees have fled Ukraine since Russia launched its invasion less than two weeks ago, the United Nations said Tuesday. Meanwhile, life is becoming increasingly dangerous and difficult for the millions who’ve remained in Ukraine.

As news and images of the war and refugee crisis fill screens all around the world, people outside of Ukraine are looking for ways to help, whether it’s by paying Ukrainians for Airbnb rooms they’re not going to use or sharing fundraisers and requests for supplies on social media.

But the outpouring of aid looks like an opportunity for scam artists. So how do you figure out which groups and fundraisers are legitimate and most likely to get your donations into the right hands?

The easiest way to make sure your money’s going to people who need it is by donating to registered nonprofits, said Kevin Scally at Charity Navigator.

“There’s a lot of accountability there. Look for an organization that has a clear, articulated strategy for how they’re actually responding to the crisis,” Scally said.

Big, established organizations are the easiest to vet through websites that evaluate charities, like Charity Navigator, the Better Business Bureau and Global Giving.

“There will be some legitimate organizations that pop up, but those pop-ups also create the possibilities for pop-ups who are not legitimate,” said Patrick Rooney at Indiana University’s Lilly Family School of Philanthropy.

If you see an appeal for donations from a group on social media, don’t just click the link and donate, said Shena Ashley at the Urban Institute.

“Give through their website to just be safe,” she said. And always pay by credit card or check. “The charity should have multiple ways to accept a donation if it’s legitimate. It’s not just cash, gift card or wire transfer. Those are things that should raise your alarm.”

GoFundMe is currently vetting all Ukraine-related fundraisers on its site, according to the company’s president, Juan Benitez.

“So if you see a fundraiser on our platform to benefit Ukraine, you can trust that it’s legitimate,” Benitez said.

So far, Benitez said hundreds of thousands of people have donated more than $20 million in just the last couple of weeks.