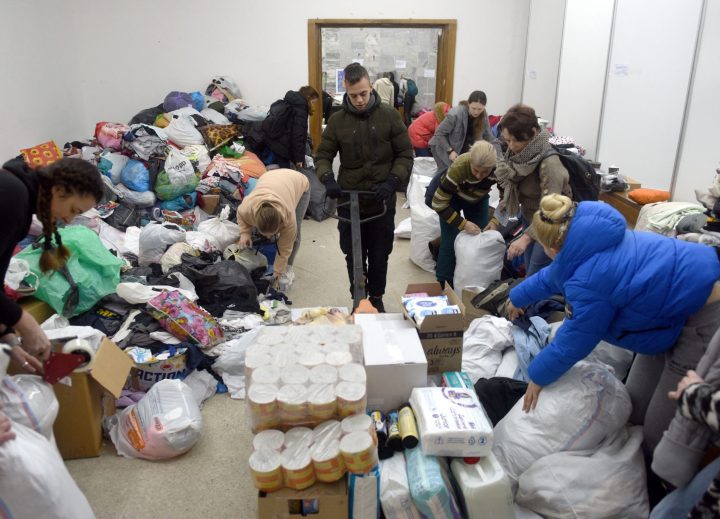 COPY
Volunteers of a humanitarian center sort clothes donated for evacuees in the western Ukrainian city of Lviv on Feb. 27, 2022. YURIY DYACHYSHYN/AFP via Getty Images

Volunteers of a humanitarian center sort clothes donated for evacuees in the western Ukrainian city of Lviv on Feb. 27, 2022. YURIY DYACHYSHYN/AFP via Getty Images
Listen Now

The United Nations could call for up to $2 billion in humanitarian aid in Ukraine. That would go toward helping people displaced by the violence following Russia’s invasion. The United Nations estimates that between 3 million and 5 million people could be displaced in the coming months.

In the city of Lviv in western Ukraine, the train station is overrun with people, said James Elder, a spokesperson for UNICEF.

“Where you walk up the stairs to a platform, it’s just absolutely heaving and then people are on tracks, trying to cross and find ways,” he said.

Lviv is about 50 miles from the Polish border. Elder said people are coming through from Kyiv.

“They’ve left elderly family who couldn’t or wouldn’t leave, carrying what they can on a train or driving,” he said.

UNICEF, which is part of the U.N., has been operating in Ukraine for eight years since the last Russian invasion. It’s scaling up efforts to help displaced people, and it’s asking for funds to provide them with things like health care, clean water and psychological support.

Susanna Campbell runs the Research on International Policy Implementation Lab at American University. She said these basic needs fall into what are called the Sphere Standards.

“It’s a kind of minimal humanitarian need that everybody should have, and then on top of that, an assessment of what are the particular needs of people in Ukraine,” she said.

Campbell said that includes obtaining supplies, figuring out where they’re needed, and getting them there. That can all be pretty complex.

They have to coordinate between the Ukrainian government, the U.N., and any other groups working in the region. The aid community also needs to think about the long-term.

“The vast majority of the people fleeing today are probably not going home,” said Shelly Culbertson, who researches forced displacement for the Rand Corp.

Culbertson pointed to a study by Rand that found that 10 years after conflicts, on average, only 30% of refugees return to their countries of origin.

“One of the worst things that can happen in refugee situations is when people flee, they think they’re going back really soon,” she said. “And their lives end up in limbo for years, decades or generations waiting to go back.”

Culbertson said those people need support to build their new lives where they land.

Correction (March 2, 2022): Shelly Culbertson’s first name was misspelled in a previous version of this story.