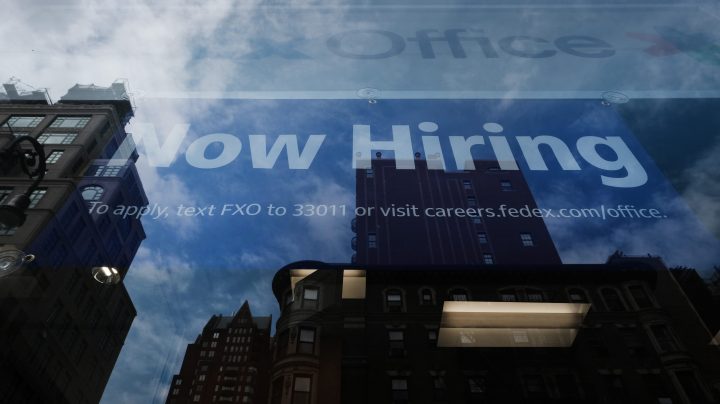 COPY
February's national jobs report is expected to look good, but read it with a grain of salt. Other recent employment reports have been revised upward after their initial releases. Spencer Platt/Getty Images
COVID-19

February's national jobs report is expected to look good, but read it with a grain of salt. Other recent employment reports have been revised upward after their initial releases. Spencer Platt/Getty Images
Listen Now

There’s a war in Europe, international sanctions on Russia like nobody has seen before and global investors are fleeing to safety. But there is still a domestic economy, and so far it remains pretty insulated from the turmoil overseas. It’s doing well, even, especially when it comes to job creation.

On Friday, the Labor Department will release the February jobs report, and it’s expected to look good. January was solid, with more than 450,000 new jobs added. The unemployment rate was a historically low 4%, and more workers returned to the labor force.

And the data for that report was compiled when the omicron coronavirus variant was surging, millions of workers were out sick and some businesses had temporarily closed their doors. Now that the pandemic’s waning — again — the job market could take off even more.

However, there is plenty to worry about — inflation, supply chain problems and another bad variant could hit.

“I know there are many things going on in the world, but right now, the labor market — I’m incredibly optimistic,” said Elise Gould at the Economic Policy Institute. She said that when the pandemic started two years ago, there was every reason to think the economy would be at least as bad as during the Great Recession.

“We lost 22 million jobs in two months, and since then we have seen a tremendous bounce-back, and we’ve added back in about 9 out of 10 jobs lost,” she said.

“There’s a much higher demand for workers now. Layoffs have gone down so much, and I expect they’re going to continue dropping, and that will really show how the jobs economy is ramping up even more,” Frick said.

According to him, the unpredictable war in Ukraine does pose a big economic risk. But he said the predictable decline in COVID cases matters more for U.S. businesses, consumers and workers right now.

“The lack of omicron is a much stronger positive to the U.S. economy than what happens in Ukraine is a negative — at least if it doesn’t really escalate,” he said.

Increasingly, what we’re seeing is a return to “labor market normal,” said Tulane University economist Gary Hoover. One example: Labor force participation has been ticking up in recent months.

“With more states and cities lifting COVID restrictions, we’re seeing people able to send their kids back to school and then look to reenter the job force,” Hoover said.

If the past few months are any guide, Friday’s employment report may disappoint on job creation, then be revised upward later, Frick said.

“These first jobs reports have been fantastically inaccurate. Are people really working? Are they really furloughed? So we have to take the labor report, first read, with a huge grain of salt,” he said. So, get those salt shakers ready.