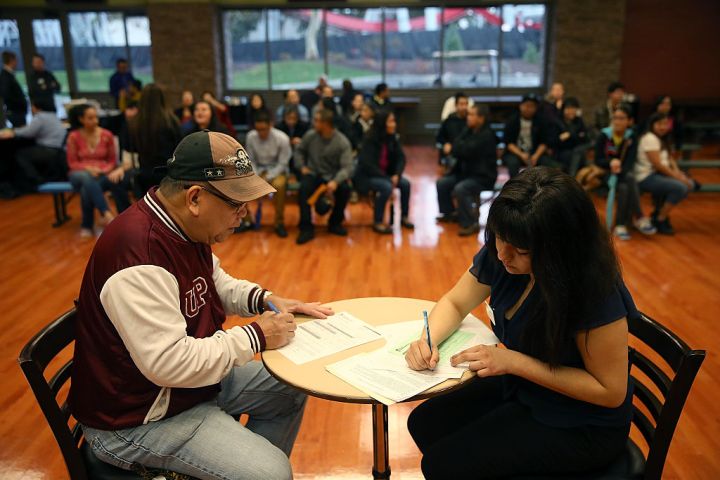 A job seeker (L) fills out paperwork as he is interviewed during a job fair at California's Great America theme park in Santa Clara, California. Justin Sullivan/Getty Images

A job seeker (L) fills out paperwork as he is interviewed during a job fair at California's Great America theme park in Santa Clara, California. Justin Sullivan/Getty Images

WASHINGTON (AP) — U.S. employers added a modest 130,000 jobs in August, a sign that hiring in the United States has slowed but remains durable in the face of global economic weakness and President Donald Trump’s trade war with China.

The job gain was boosted by the temporary hiring of 25,000 government workers for the 2020 Census. Excluding all government hiring, the economy added just 96,000 jobs in August, the fewest since May.

Still, the Labor Department reported Friday in its monthly jobs report that the unemployment rate remained 3.7%, near the lowest level in five decades. And more Americans entered the workforce in August — a positive development that increased the proportion of adults who are either working or seeking work to its highest level since February.

Even with the slower pace of hiring, more jobs and rising pay are expected to help sustain America’s economic recovery, which has entered its 11th year, the longest on record. An improving job market can help fuel consumer spending, the primary driver of growth.

And for now, Americans are still spending. Consumer spending rose in the April-June quarter by the most in five years. It had also increased at a healthy clip in July.

That is especially significant now because many businesses have cut their spending and delayed expansion and investment given their uncertainty about the duration and impact of the trade war. In addition, retaliatory tariffs from China have cut into U.S. exports.

In its employment report Friday, the government revised down its estimate of job growth for June and July by a combined 20,000. That revision reduced average job growth for the past six months to 150,000, down from 223,000 for all of last year. Still, hiring at the current monthly average would be enough to keep up with population growth and lower the unemployment rate over time.

For August, the unemployment rate for African-Americans fell to 5.5%, a record low. Trump has repeatedly highlighted that decline, which has been steady since the Great Recession ended in 2009. In August, however, the rate fell because more African-Americans stopped looking for work and were no longer counted as unemployed.

Consumers generally feel positive about the economy despite some cautionary signs. Their confidence, as measured by the Conference Board, is still strong. But an index of sentiment compiled by the University of Michigan fell in August by the most in nearly seven years. In that survey, Americans expressed rising concern about the consequences of tariffs.

U.S. and Chinese officials plan to meet in early October in negotiations that are intended to resolve their dispute. The announcement Thursday of next month’s resumption of talks helped ignite a rally on Wall Street.

The impact of the trade war is evident in industry-specific hiring figures. Manufacturers added just 3,000 jobs, the latest sign their hiring has fallen off sharply from last year. Employment in shipping and warehousing companies was essentially unchanged, with fewer factory and farm goods to transport. Retailers cut 11,000 jobs, the seventh straight month of decline, which is partly a reflection of the impact of online shopping.

As the tariffs increasingly take effect, trucking companies could absorb a hit if they have fewer factory and farm goods to ship. And retailers might cut workers as tariffs start to affect such consumer goods as clothes, toys, and electronics. If setbacks in those industries become severe enough, they could eventually raise the unemployment rate.