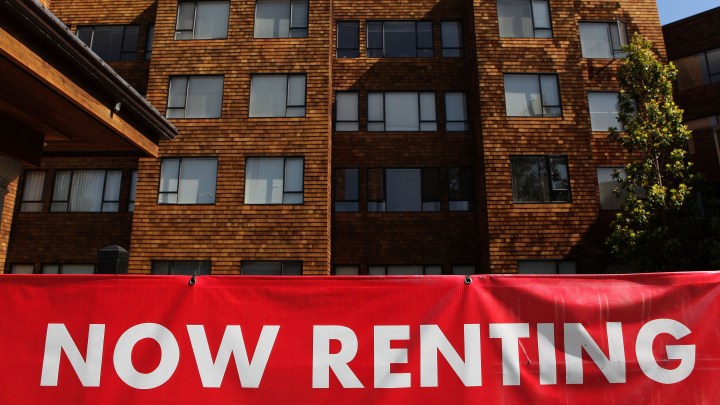 COPY
"I think what we're seeing is that these companies are acting in ways that are problematic for tenants to meet their investment goals," said ProPublica reporter Heather Vogell. Justin Sullivan/Getty Images

"I think what we're seeing is that these companies are acting in ways that are problematic for tenants to meet their investment goals," said ProPublica reporter Heather Vogell. Justin Sullivan/Getty Images
Listen Now

Landlords typically look at their properties as long-term investments, with most receiving the bulk of their profit through rent from tenants. But a new investigation has found that private equity-backed firms are increasingly moving into the fold. These firms seek to profit in a much shorter time frame.

A new report from ProPublica dives into the role of private equity in the multifamily rental market. The report reveals the growing proportion of private equity-owned apartment buildings as well as how tenants are being affected by changes in ownership. These firms don’t always operate alone: Government-backed housing financiers have provided billions of dollars to help fund large purchases.

“Marketplace Morning Report” host Sabri Ben-Achour spoke with ProPublica’s Heather Vogell, the reporter behind the new investigation. Below is an edited transcript of their conversation.

Sabri Ben-Achour: You wrote there’s this dramatic, mostly unnoticed shift in the control of an important part of this country’s housing stock. And you’re referring to private investment firms getting into the real estate business. Who are these firms, exactly?

Heather Vogell: Yeah, so these are firms that have private equity backing them. What that means is that these are firms that are financed usually by some of the biggest pots of money on Wall Street, including pension funds, investment banks, college endowments — so huge amounts of money that is invested in these funds. And these funds are created for the purpose of buying large-scale, expensive real estate. And in this case, we’re talking about big apartment buildings — millions of dollars, sometimes $1 billion or more. These firms will come in and they’ll buy apartments, sometimes by the thousands.

The cost of apartment flipping for tenants

Ben-Achour: Landlords come in all different shapes and sizes. What makes these firms different from the perspective of the people living in these apartments?

Vogell: Well, what I found was that what really distinguishes this type of landlord from other types of landlords is that other types of landlords — mom-and-pop landlords or even other types of corporate landlords — typically what they want to do is, you know, create a steady stream of income through the rent, and over time hope that the property value will increase and that they’ll end up having a piece of property at the end that’s more valuable than when they started. What’s different here is that you have a firm that’s coming in without a long-term-hold strategy in most cases. And what I mean by that is that this is a firm that comes in with the plan of getting out again in a few years. Because ultimately, most of the time for private equity, the goal is to sell at a higher value, at a higher price, a few years after they’ve bought, and that’s how they reap the big profits to return to their investors. And so what that means for tenants is that you have a landlord coming in who wants to increase profits very quickly and then get out again. They don’t have the same commitment or investment as a landlord that is coming in to hold on to the property for a long time, over time. They don’t have the relationship that someone with a long-term-hold strategy has, is what tenants were telling me and what advocates were telling me.

Ben-Achour: When you say these kinds of landlords behave in ways that are, you know, adverse to tenants, what are you thinking of?

Vogell: Well, what we saw was very steep rent increases and also a decline in the services that are being provided to tenants. And that’s sort of euphemistic sounding. But what I’m talking about are basic repairs, repairs to appliances, for instance, and maintenance of common areas, security, things that are necessary for people to live comfortable, quality lives, essentially. That those are the types of things that tenants told us were ending up on the chopping block.

Ben-Achour: In your reporting, you described a situation where there was this tenant in a supernice modern, glass building. He learns it’s being bought by one of these private equity firms, and all of a sudden, the trash stops getting collected and piles up. The rent skyrockets. How typical is that?

Vogell: Well, I heard from lots of other people who had similar things happen to them in other cities with other companies. So, you know, we don’t have a way of documenting this precisely, how often it’s happening. But I am hearing that it’s, it is happening in cities all over the country. And I’ve heard both from tenants who are concerned about it, and also, frankly, from people who were doing the financing and were watching this happen — people in that industry. So, you know, it’s something that has been somewhat widespread, I think, over the last maybe five to seven years especially, and maybe has been accelerating a bit. But it’s hard to know exactly how many people we’re talking about.

Does this contribute to rent inflation?

Ben-Achour: Rent inflation is a serious concern right now. Are these firms contributing to that?

Vogell: I think that’s a really, really good question. And you know, they will say no, that they are providing necessary capital to improve these buildings and to build more housing in some instances. But what other people have told me, other experts in housing have said was that essentially because we have more renters in the market and we have a housing crunch, that that has really emboldened speculators — people who are looking for a quick profit — and that would describe this method of ownership. So the rental market is a huge market. There are a lot of different causes for rent increases, but this very well could be one of them.

Ben-Achour: What is behind this? You say this is sort of an exploding sort of phenomenon. What’s behind this increase in private equity firms getting into the real estate, the landlord business?

Vogell: Well, what we found was that government-backed financers, like Freddie Mac and Fannie Mae, were really fueling this increase in private equity ownership of apartment buildings because they were offering a type of financing that was very attractive to these firms. They had low interest rates and very few conditions on the financing. We obtained some data from Freddie that showed that of the 20 biggest deals that Freddie had ever done in the multifamily sphere, that 85% of them were done with private equity firms. And all of those deals were done since 2015, except for one. So this is really a fairly recent phenomenon that the deals have gotten this big, and that private equity has been so dominant.

Ben-Achour: Ultimately, what do you think the most important implication is here for the experience of the American renter or homeowner?

Vogell: Well, I think that what we’re seeing is that these companies are acting in ways that are problematic for tenants in order to meet their investment goals. And that while tenants have protections in some cities and in some states, it’s really a patchwork across the country. And these are multistate firms. Sometimes they’re global, even. And they’re coming into these localities, and in some places, there is nothing to protect the tenants. I mean, people keep asking me, “What can tenants do to protect themselves from this?” And I’m not sure there’s anything that a tenant can do. There’s talk about trying to add protections into the financing that Freddie and Fannie does, but short of something that has a broader reach across states like that, I’m not sure what people can do.