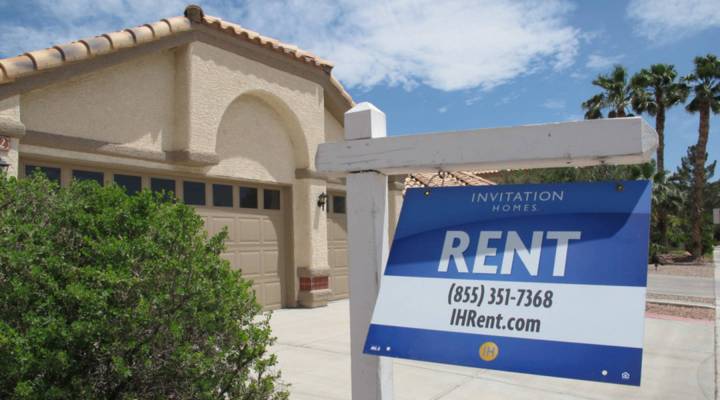 Las Vegas resident Kristy Maser has become so frustrated with her house-hunt, she said she sometimes cries herself to sleep at night.

She’s not alone. Despite years of record-low interest rates and a healthier economy, fewer people every year are able to afford a local median priced home. We are slowly becoming a nation of renters, and that’s changing the way Fannie Mae, the government-sponsored backer of mortgages for individuals and investors, sees its role.

The agency recently backed a billion-dollar financing deal with Invitation Homes, which owns almost 50,000 single family rental houses in 13 markets across the U.S. The deal is causing concern among some groups that corporate landlords may be getting a boost from the government.

Jeffrey Hayward, head of multifamily at Fannie Mae, said the agency is just responding to the market’s trend toward rentals.

“If the market decides it wants to be a rental market, we have a thriving rental finance business, and we want to be there to serve low, middle moderate workforce,” said Jeffrey Hayward, head of multifamily at Fannie Mae. “We want to be there for that.”

Fannie Mae has a long record of working with investors in multifamily apartment buildings, but when it comes to single family homes, the agency typically capped investors at 10 homes. Even with that limit, the agency still backs more than $200 billion worth of single family rentals, according to Hayward.

The agency’s deal with Invitation Homes is the first time the agency is providing financing for institutional single family rental properties, according to a report from the Urban Institute’s Housing Finance Policy Center.

These large, institutional investors only make up 1 or 2 percent of the single-family rental market, but compared to traditional investors, their holdings are huge. Hayward said Fannie Mae is in “test and learn” phase, and the deal with Invitation Homes will provide access to important data.

“We should have a real sense of what it costs to operate these properties, what some of the best management practices are, so that you can set standards for expanding as the single-family rental ownership market changes,” he said.

But one agency’s teachable moment is another group’s idea of corporate welfare.

“Much of the investor work in this space is very well-capitalized already. The private market provides the capital, and investors are able to buy units and deploy them as single family rentals,” said Julia Gordon of the National Community Stabilization Trust, which brings together financial institutions and community developers to help repair blighted neighborhoods. She argues these companies don’t need Fannie Mae’s help.

In fact, many of the companies in this space—Invitation, American Homes 4 Rent, and Colony-Starwood—grew quickly during the aftermath of the housing bust by buying up distressed properties by the thousands and renting them out, backed by massive investment firms.

There are many complaints about the growth of the industry, including reports, highlighted by Reveal and the Center for Investigative Reporting, of poor maintenance of properties. The NCSL’s Gordon would rather see Fannie Mae’s resources directed towards affordable housing.

“There are no affordability standards that apply to Invitation Homes’ work,” she said. They can charge as much as they want. In fact, their median rents are far, far higher than the overall median rents for [other] single family rentals.”

But perhaps the loudest complaint is from potential homeowners, who blame investors for making an already tight housing market even worse. Even Fannie Mae acknowledges many traditional “starter homes” have shifted to rentals.

“It’s ridiculous,” said Maser about finding an affordable home in Las Vegas, speaking at Grouchy John’s coffee shop, where she meets up with her weekly runners group.

Las Vegas, one of the cities hit the hardest by the housing bust, has a significant number of homes owned by institutional investors.

“A lot of people from out of town are coming in just to buy up the rental properties for income properties and they are paying cash,” Maser said. “They’d rather take a cash buyer than somebody that needs to finance.”

But, she plans to keep looking and waiting for the prices, and the competition, to eventually die down.