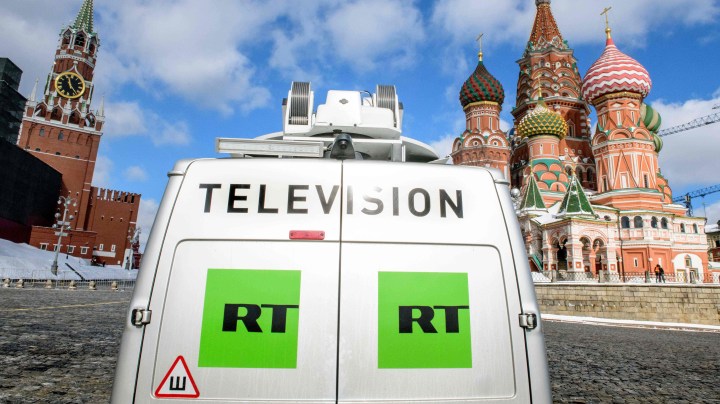 Facebook’s parent company, Meta, along with YouTube and TikTok, have banned the Russian state media channels Russia Today, or RT, and Sputnik from their platforms in Europe because of the war in Ukraine.

In a statement posted to Twitter, Meta’s president of global affairs, Nick Clegg (who is also a former deputy prime minister of the U.K.), said the company acted after receiving requests from several governments and the European Union.

The ban is a significant move for social media companies that have long resisted calls to restrict disinformation and other controversial content on their platforms.

Long before Russia invaded Ukraine last week, the Kremlin was laying the groundwork for the action online, according to Imran Ahmed, CEO of the nonprofit Center for Countering Digital Hate.

“The war in Ukraine didn’t start with missiles or tanks — it started with disinformation, which has been dripped into people’s news feeds over years now,” he said.

Russia spread a lot of that through RT and Sputnik, Ahmed said. So this ban is significant. “When it comes to the world’s most prodigious output of disinformation, which is the Russian state, it is about time that the single worst actor on the global stage feels some consequences on social media.”

For years, social media companies have largely resisted pressure to take down or ban content on their sites, even when it’s proven to be false and dangerous.

But they have done so at times.

“They’re good about banning the possibility of putting child pornography on. They got better about deplatforming ISIS and other terrorist organizations,” said Juliette Kayyem at Harvard’s Kennedy School of Government.

Kayyem said this is different. “This is a state-sponsored media outlet. They’ve never really done this before.”

Social media platforms banning users or content at the request of governments does set a new precedent, though — one that Jessica Brandt, a policy director at the Brookings Institution, is concerned about.

“There’s just so many shades of gray, and I fear that many other governments will make requests of many other platforms in many other political contexts to take down content that they view as problematic or opposed to their interests,” she said.

That could have long-lasting ramifications, Brandt said, and she’s concerned about platforms making these kinds of decisions on the fly with very little transparency.