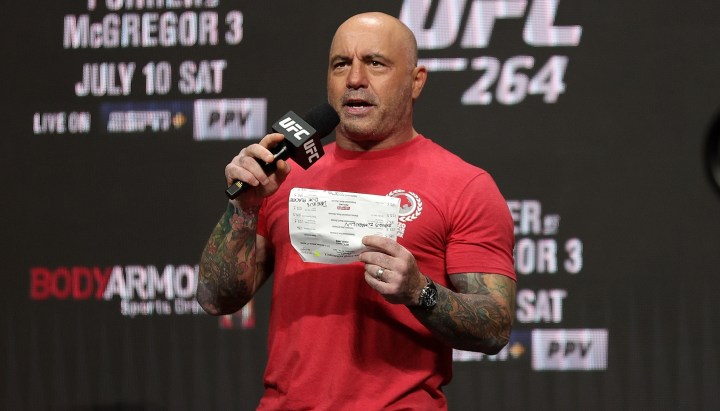 Joe Rogan announces fighters during a ceremonial weigh in at the Ultimate Fighting Championship on July 9, 2021. Stacy Revere/Getty Images

Joe Rogan announces fighters during a ceremonial weigh in at the Ultimate Fighting Championship on July 9, 2021. Stacy Revere/Getty Images

Controversial podcast host Joe Rogan may have received at least twice the amount of money in his Spotify deal than was initially reported — to the tune of $200 million.

Two people familiar with the deal told the New York Times what “the true value of the deal” is, and said it might be worth even more. The Wall Street Journal had initially reported back in 2020 that their deal was worth $100 million, according to “a person familiar with the matter,” and that it “will likely be worth more than $100 million based on milestones and performance metrics.”

At the time, Spotify announced that it had struck a “multi-year exclusive licensing deal” with Rogan for his podcast “The Joe Rogan Experience” to stream on its platform.

But earlier this year, the podcast host and former host of “Fear Factor” received heightened scrutiny for perpetuating anti-vaccine misinformation. He gained more media attention after singer India Arie highlighted that he had used the n-word several times on his podcast, which prompted Spotify to take down 70 episodes.

In response, Arie said she would remove her music from the streaming service, an announcement that came after musicians Neil Young and Joni Mitchell had already said they removed their music due to anti-vaccine misinformation.

“Shareholders are now paying both for fulfilling the contract and for the public animosity that it has brought the company,” said Lori Verstegen Ryan, director of the corporate governance institute at San Diego State University. “Doubling the amount pours salt in that wound.”

What obligations does Spotify have in its financial reporting?

Spotify has yet to correct or clarify information about the value of its deal with Rogan, and did not respond to a request for comment. The company itself has not publicly disclosed information on the value of this deal, with details only coming from anonymous sources.

Because the information about the deal did not come from the company itself, Spotify is not responsible for any discrepancies in these deal valuations, according to experts.

David Hess, a business law and business ethics professor at the University of Michigan, said that having to correct information in the press would place a “difficult obligation” on companies, and would otherwise mean that a rumor has the power to force companies to disclose information that they don’t want public.

This situation would be different if a CEO, CFO or other representative at the company made a false or misleading statement — which the Securities and Exchange Commission has gone after companies for, explained Preeti Choudhary, associate professor of accounting at the University of Arizona.

But, Choudhary said, that’s not the case here because the public does not know who these sources are.

Kevin Haeberle, a professor at William & Mary Law School, also pointed out that the Rogan deal valuation may not constitute false or misleading information because Rogan could have ended up earning more money after hitting certain milestones. And he may also be paid in stock options, said Charles C.Y. Wang, an associate professor of business administration at Harvard Business School.

“We don’t know what that contract looks like,” Wang said.

Hess explained that one thing a public corporation is barred from doing is selectively disclosing “certain information to select shareholders.”

“The corporation must make any disclosure of material nonpublic information available to all shareholders. The easiest way to do that would be a press release,” Hess said. “In addition, any statement made to the press may be the basis of a securities fraud lawsuit. Thus, for a public corporation, any disclosure will be made available to all shareholders and the press.”

How does this potentially inaccurate information work in Spotify’s favor?

Wang said managers, thinking of the company’s stock price, often have an incentive to make companies look more profitable and financially healthy than they perhaps actually are. One of the common ways you could do that is to let the market think that your expenses are lower.

So, having a deal that’s believed to be worth $200 million vs. $100 million would end up making the deal look less profitable, Wang said. But again, Wang said both numbers might not be false, and that the total value of the deal could be worth a range.

Haeberle pointed out that in general, Wall Street is filled with rumors.

Since the uproar started over Rogan’s podcast, Spotify CEO Daniel Ek has said the podcast will stay on its platform. However, he apologized to employees in an internal letter shared with the Wall Street Journal over “Rogan’s use of a racial slur.”

In response to anti-vaccine misinformation concerns, Spotify published the platform’s rules, which cover topics like dangerous, deceptive and sensitive content. In a separate post, Ek said that Spotify will add “content advisory to any podcast episode that includes a discussion about COVID-19.