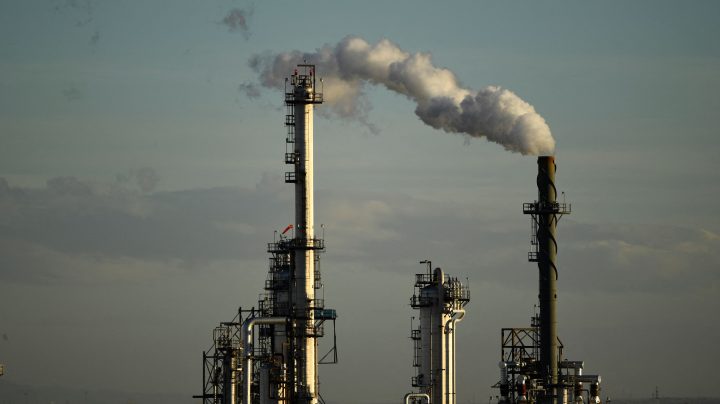 COPY
The cost of oil is nearing $100 a barrel, spurred in part by fear of a supply interruption. Above, a Marathon Petroleum refinery in Texas. Patrick T. Fallon/ Getty Images

The cost of oil is nearing $100 a barrel, spurred in part by fear of a supply interruption. Above, a Marathon Petroleum refinery in Texas. Patrick T. Fallon/ Getty Images
Listen Now

Over the weekend, President Joe Biden warned Russian President Vladimir Putin that the U.S. and its allies would impose “swift and severe costs” on Putin’s nation if it invades Ukraine.

The situation has pushed up oil prices. Monday, Texas crude rose to around $95 a barrel.

If the U.S. and its allies were to impose sanctions, there’s worry about what Russia might do next, according to Tom Seng at the University of Tulsa.

“The fear of any interruption of oil, anywhere in the globe right now, is pushing prices higher,” Seng said.

Russia is the world’s third-largest oil producer, and in theory it could raise prices for its oil and gas exports. It could also divert exports away from Western Europe, which relies heavily on Russia for natural gas.

“Really, Russia has been holding Europe over a barrel because they know how much that continent is dependent upon their energy flows,” said Matt Smith, with the data and analytics firm Kpler.

It’s true that Russia’s economy is dependent on selling that energy, which is why Russia can only push its leverage so far, Smith said.

But according to Sara Vakhshouri, president of SVB Energy International, that’s not much comfort to the oil market right now.

“The market is very sensitive to any factor that could interrupt the supply because the market is already tight,” she said. The global economy has been reopening after the pandemic lockdowns and many parts of the world have had cold winters, so demand is strong.

Patrick De Haan is head of petroleum analysis for GasBuddy. According to him, oil producers are struggling to keep up.

“Demand for oil is up, but production has lagged behind, and so the whole global balance between supply and demand is a bit out of whack now,” De Haan said.

Regardless of geopolitical tensions, oil prices are likely to keep rising, De Haan said, especially when the driving season kicks off this spring.