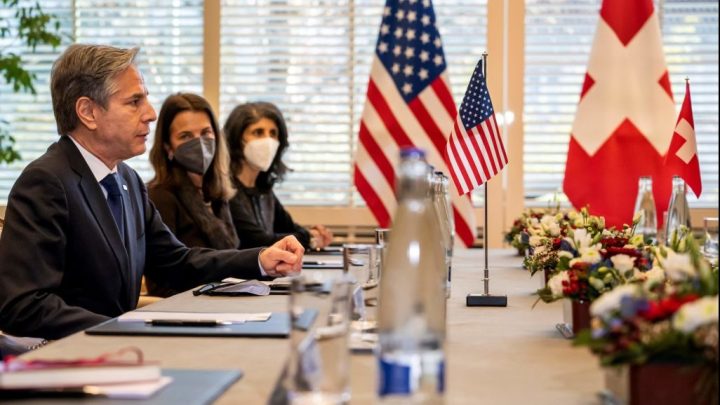 On Friday, Secretary of State Antony Blinken met with his Russian counterpart in Geneva, the latest in a long series of meetings about deterring a Russian invasion of Ukraine. The Joe Biden administration and America’s European allies have made it clear that economic sanctions are about as far as they’re willing to go, but economic sanctions on Russia are already in place, going back to the annexation of Ukraine’s Crimea region in 2014. So, where does U.S. policy go from here?

“Marketplace” host Kai Ryssdal discussed that with Eddie Fishman, a senior fellow at the Atlantic Council, an adjunct fellow at the Center for New American Security and a State Department staffer during the Barack Obama administration. The following is an edited transcript of their conversation.

Kai Ryssdal: There is already a pile of sanctions on Russia. Put yourself in the mind of Secretary of State Antony Blinken and his policy planning staff, and talk to me about what you think they might be considering now.

Eddie Fishman: The most important thing to know is that the sanctions in place in Russia today are still relatively modest. I think there’s this misconception that Russia has a lot of sanctions that have been applied to it. The truth is, there was a big first wave of sanctions in 2014. But they really haven’t been ratcheted up too much in the last eight years. What the Biden administration could do today is impose what are called full blocking sanctions on Russian banks and companies. Those are the sanctions that actually cut off a bank from the entire U.S. financial system. And it does seem like if Russia did make the decision to invade Ukraine, the Biden administration would be ready to impose some full blocking sanctions on Russian banks and companies.

Ryssdal: And certainly the White House, the president himself and Secretary of State Blinken have been talking the talk. But it occurs to me that the sanctions do not come without cost to the United States — and conceivably our allies if we can get them to go along, which is a whole ‘nother question I’ll get to in a minute.

Fishman: That’s exactly right. And I think this is probably the biggest debate that’s going on internally within the Biden administration because if you are going to actually be ready to impose full blocking sanctions on Sberbank, which is the largest bank in Russia, or impose sanctions that would affect Russia’s ability to export oil, which, of course, would be a major escalation in penalties, they’re going to affect the global economy, and certainly Europe, and maybe even the United States. I think what we have to look at is the goal, now, is to avert a major war in Europe, and we should be prepared to absorb some political, economic and diplomatic costs if what we’re going to get is deterring a war.

Ryssdal: The mention of a land war in Europe, which just seems incredible that we’re actually using those words, right? You have to get the Europeans on board, and there are 27 members of the European Union. They have to act in concert to impose sanctions. What do you think? Spitball that for me.

Fishman: Sure, and I think, you know, up until now, the U.S. — certainly during the Obama administration and during the Biden administration — has put a premium on coordination with the EU. And I think that’s really important because I think one of Putin’s goals, in addition to bringing Ukraine into his sphere of influence, is to divide the trans-Atlantic community. But I would be surprised if the European Union is willing to go as far as it will require to deter Russia with sanctions. So I think that the Biden administration is going to have to be willing to act alone and faster than Europe if it really is going to impose the type of sanctions that are required to deter Russia.

Ryssdal: I heard the other day on “All Things Considered,” [former U.S. National Security Council official] Alexander Vindman said that Russia has been “hardening” itself against sanctions since 2014, that Putin probably had some inkling that he was going to do this and that we were going to do that. Do you buy that hardening notion?

Fishman: It’s definitely the case that Russia has become more resilient to sanctions. The sanctions, like I said, that were put in place in 2014 weren’t all that strong, and they still sent the Russian economy into a tailspin. The ruble collapsed. Russia had a significant contraction in [gross domestic product]. What Putin has done in the interim is really rebuilt the Russian economy. They now have foreign exchange reserves in excess of $600 billion. That said, they’re not invulnerable to sanctions and certainly, if the Biden administration was willing to actually use the sanctions tools that the United States possesses, it could send the Russian economy into a tailspin again. So, yes, Russia is more resilient to sanctions, but they’re certainly not invulnerable to them.

Ryssdal: Last thing, and then I’ll let you go. The United States is the biggest, most powerful economy in the world, at least for now. And yet economic sanctions are just so hard to do and often they don’t work, right?

Fishman: That is true. And I think that’s because sanctions are not a silver bullet. They’re extremely effective at imposing economic pain. The United States could, unilaterally, by itself at the stroke of a pen, impose devastating economic consequences on Russia. The real question is, to what end? Will those consequences change Putin’s calculus? And many times the answer is no. And I think that’s what we’re all waiting to see right now.