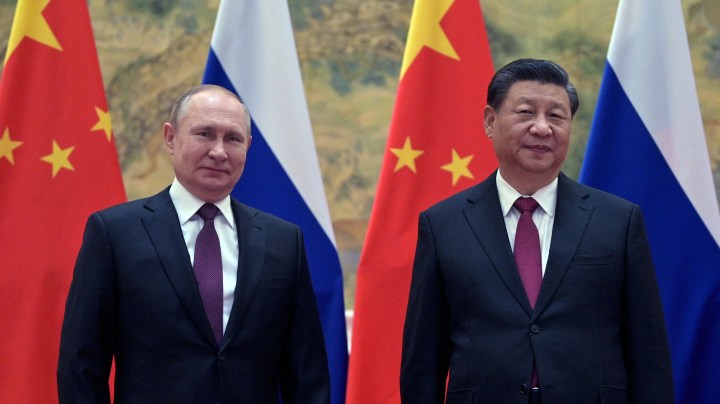 This week, the White House warned China not to help Russia skirt sanctions or generally provide support — financial or military — to Russia in its war against Ukraine.

National Security Adviser Jake Sullivan met with a top Chinese diplomat Monday, expressing “deep concerns” over ties between Beijing and Moscow, but afterward didn’t offer specifics about consequences for China. So what are the economic options for the United States?

China has criticized Western sanctions and said it will trade with Russia as usual.

“But on the other hand, China’s really worried about the global condemnation reverberating back on itself,” said Jennifer Lind, a professor of international relations at Dartmouth College. “The world is going to be very interested in how China responds.”

If it comes to Russia’s rescue, that would put China at odds with its largest trading partner.

“This is now a three-dimensional chess game, which certainly escalates the potential for downward spiral of economic repercussions,” said Arthur Dong, a professor at Georgetown’s McDonough School of Business.

The U.S. could expand tariffs on Chinese goods and the list of products that U.S. companies are banned from exporting to China, Dong said. “Broadening the scope of export controls can be a very powerful deterrent.”

He added that if China faces new sanctions from the U.S., it would become increasingly isolated. “They call this ‘secondary sanctions,’ and that’s where the real power of this tool resides.”

But sanctions may not stop China from stepping in as an economic buffer, according to Joshua Eisenman, a senior fellow in China studies for the American Foreign Policy Council. Shoring up its partnership with Russia is a priority for China, he said.

“And to the extent that we believe that through economic coercion we can change their politics,” that’s just not going to happen, he said.

Something that might give U.S. policymakers pause: Tariffs on China tend to raise prices for American consumers.