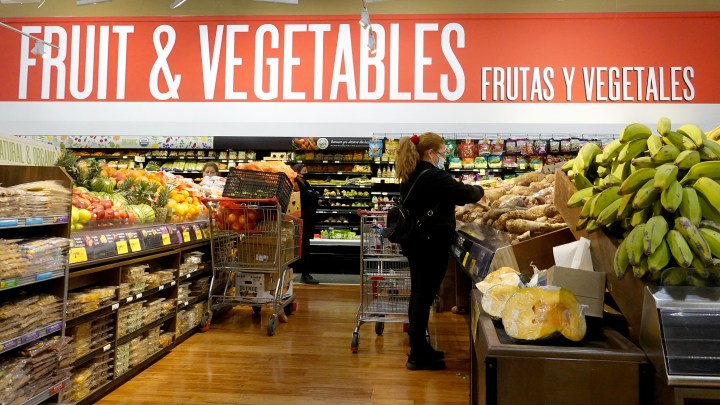 Consumers are on an inflation expectations roller coaster

COPY
Consumers are feeling the pinch of inflation pretty much any time they open their pocketbooks — but they're optimistic that price gains will ease in the coming years. Joe Raedle/Getty Images

Consumers are on an inflation expectations roller coaster

Consumers are feeling the pinch of inflation pretty much any time they open their pocketbooks — but they're optimistic that price gains will ease in the coming years. Joe Raedle/Getty Images
Listen Now

American consumers are worried. The University of Michigan consumer sentiment index has just fallen to its lowest level in a decade, with inflation being the main concern.

On Monday, yet another monthly survey — this one from the Federal Reserve Bank of New York — finds that longer-term inflation expectations are moderating.

Economists don’t just worry about the actual rate of inflation; they also worry about these expectations. The theory goes that if consumers think inflation is going to stay high, they’ll demand higher wages, their employers will keep raising prices and a difficult-to-resolve “wage-price spiral” will ensue.

As inflation shot up to a 40-year high, consumer sentiment tanked. “Consumers tend to forecast with what I would call a very short ruler,” said economist Mark Zandi at Moody’s Analytics.

This is driven by consumers’ direct experience with activities like grocery shopping, car shopping and gassing up, Zandi said.

But the New York Fed now finds that our longer-term inflation expectations aren’t so dire. Consumers predict inflation will be 3.5% three years out — less than half what it is now.

They seem to understand that the pandemic, with its massively messed-up global supply chains, has been an unusual period, per Giorgio Topa, a member of the New York Fed’s research team.

“They are viewing the inflationary experience differently now, during the pandemic, and so they don’t view it as particularly long lasting,” he said.

Meanwhile, Americans are very confident about jobs and wages — more than they were before the pandemic, according to economist Erik Lundh at The Conference Board. That’s as labor shortages continue.

“So that means wages are going to continue to rise at above pre-pandemic rates, in 2023 and beyond,” he said.

If higher inflation expectations do stick around long term, that could be a big problem. But that’s likely to take a while to play out.

By the time inflation peaked above 14% in the early 1980s, Americans had already lived through two decades of really high inflation.