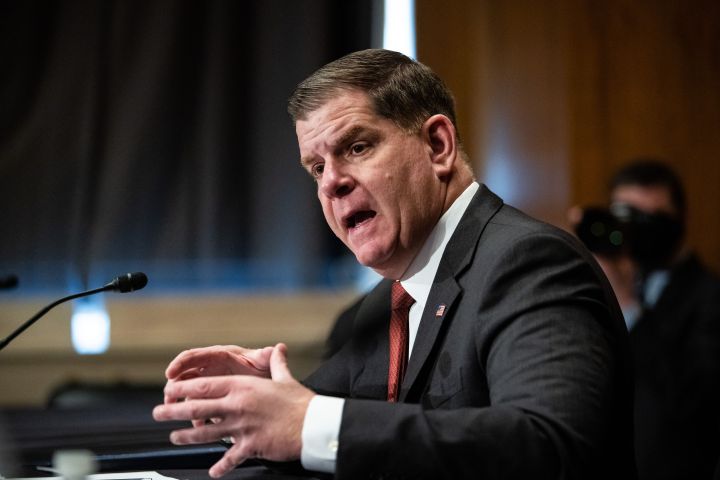 Have you or someone you know paid out of pocket for mental or behavioral health treatment that should have been covered by health insurance, or gone without because of the cost? We want to hear from you.

Health coverage at work is supposed to cover behavioral health issues – including mental health – the same way it covers anything else. It’s been the law of the land since 2008: No extra hurdles, preauthorizations or stipulations if those aren’t also part of the regular coverage.

Congress asked the Labor Department to survey insurance health plans and those issuing insurance. Marketplace got a look at what it found: Many deficiencies, and not a lot of providers giving the government the information requested. In some cases, providers fixed the deficiencies when the government noticed.

Labor Secretary Marty Walsh told Marketplace’s David Brancaccio in an interview that the department will put renewed focus on enforcing the law and correcting those failures.

“And we’re going to use every tool that we have under the ability that Congress gave us, and also with [the Department of Health and Human Services], to enforce this and push this law forward,” said Walsh.

“It’s a priority for me because I’ve done this work for a long time. I’m somebody that’s in long-term [substance use] recovery. And I also understand the importance of having mental health parity and substance use parity for people in America,” he added.

David Brancaccio: What are you seeing here with this data? Are employers still not on board making behavioral health just as covered as anything else?

Marty Walsh: Well, certainly the report outlines the department’s efforts to interpret, implement and enforce the amendments in this law made by the [Consolidated Appropriations Act, 2021]. The report also includes information that suggests there’s a failure by health plans and health insurers to deliver parity for mental health [and] substance use disorder for those people they cover. And it highlights the department’s recent emphasis on greater parity enforcement to correct those failures. So yes, the answer is it’s not working the way it needs to.

Brancaccio: Now, your people researching this had to turn some of these parity reports back to the providers because — what — the reports weren’t up to snuff, or the coverage that they were describing wasn’t up to snuff?

Walsh: Yeah, well, I mean, [the Employee Benefits Security Administration] issued approximately about 156 letters to the plans and insurers requesting required analysis. None of the analyses reviewed to date have contained sufficient enough information upon the initial receipt. So in response to these initial requests, we’ve issued 30 letters finding 48 initial determinations of noncompliance during the period covered by this report. So that’s where we are today.

Brancaccio: And in some cases, when the health plans didn’t show parity and your people went back to the provider, some of the providers fixed the problems?

Walsh: Yes. Right now, I think between May and November of 2021, [the Centers for Medicare & Medicaid Services] issued 15 letters requesting the required analysis. CMS, so far, has issued 15 letters finding 16 initial determinations of noncompliance. So we’re still working to get the information. I mean, at the end of the day, you know, these benefits should be covered. I spent my time prior to being the secretary of labor — from 1997 to 2014, I was a state representative legislator of Massachusetts, and one of the, one of the issues, the main issues I worked on as a legislator was mental health substance use parity laws in Massachusetts. We have tens of thousands of people in our country that are struggling, and right now with the pandemic, probably more than that. And not having adequate coverage, but better than adequate coverage, is really disappointing, and quite honestly very dangerous for people in our country.

Brancaccio: Yeah. Now, Congress asked for this report from the Labor Department. You’re going to send it over. But is there much you can do when you find that behavioral health coverage is getting some kind of second-class status?

Walsh: Yeah. I mean, we’re going to continue to move forward. We’re going to work on enforcement of this. We’re working — I had a meeting earlier today, actually yesterday, on Sunday, to talk about the parity law and to make sure that we enforce it. I had another meeting this morning talking about the law — not preparing for this interview, but talking about the law and how we enforce it. And we’re going to use every tool that we have under the ability that Congress gave us, and also with [the Department of Health and Human Services], to enforce this and push this law forward. And not just push this law, push this coverage forward, quite honestly. The law is there, now it’s the coverage that we need.

Brancaccio: I mean, do you think you need more enforcement powers? I know Congress would have to give it to you.

Walsh: Yeah, potentially. We’re going to look and see what we need, but right now, I mean, even the basic — what we have, I don’t want to describe it as basic, but — what with the abilities we have right now, you know, insurance companies and employers should be doing better with this than they are today. You know, for companies and insurers, it’s their ratepayers and their employees that need this coverage, and their families — so we need to make sure that they cover it. I mean, you know, this has been an ongoing conversation in our country for a long time, mental health parity. And, you know, there are challenges that we have to address aside from being covered. But this needs to be a priority for insurance companies.

Brancaccio: Yeah. I mean, one of those challenges is that people with coverage — the ones who do have coverage — have trouble finding providers, psychologists and other mental health professionals. There just isn’t enough of them out there. You can imagine some companies would, you know, if they’re acting in good faith, might still have trouble finding the people for in-network coverage so that they can show parity.

Walsh: One thing that’s happening here, though, the [Joe] Biden-[Kamala] Harris administration is certainly committed to addressing the needs for more mental health care professionals. There’s no question about that, that this industry has not had, I don’t think, the support that it’s needed in the past. But historic investments are being made to better support critical workforces — and this is one of the critical workforces — thanks to the American Rescue Plan and the Provider Relief Fund. We’re working to strengthen mental health care workforce by investing in strategies to — a couple things. One, build a pipeline of health care professionals. Second, engage students early through their careers to create development with scholarship programs. Also looking at first funding postgraduate residency training for health care professionals, [those are] important opportunities. And also looking at loan repayment programs. So all of these pieces are — you know, President Biden and Vice President Harris have laid down that foundation, I’d say about a year ago now, last January — or it passed March — but last year when it passed. And we’re working to make sure that this pipeline is there. And then we’re also going to have to, I think, be really intentional about working with hospitals. There’s also lack of — I come from Boston, and there, quite honestly, is a lack of beds in a lot of the facilities around the country, and for adolescent care as well there’s even fewer beds.

Brancaccio: But back to this core parity thing — I mean, you come in as secretary of labor, the law has been on the books for 14 years, you must be saying to yourself, “Are they still trying to fix this?”

Walsh: Well, yeah, I think it’s about that. And then I’m not sure where the priority was made. But certainly, when the president asked me to be secretary of labor, I, prior to that, I was being vetted and I was looking through the Department of Labor’s website. And if you look at the website, the second-to-last bullet point was mental health parity. And for me, it’s a priority for me because I’ve done this work for a long time. I’m somebody that’s in long-term recovery. And I also understand the importance of having mental health parity and substance use parity for people in America. It’s a priority of mine now, and that’s why — and I’ve also, with HHS, working with Secretary [Xavier] Becerra — we’re making sure that this is going to continue to be a priority here. Because, aside from the fact that we’re seeing, I think the numbers are 1 in 3 Americans have some sort of potential issue because of COVID — we need to make sure people are covered. And when I say “covered,” covered to get the health they deserve, not just simply covered. I mean, a lot of insurance will say, “They’re covered. We have it in our documents that it’s part of the portfolio.” It’s more than covered — it’s actually getting good, strong care that people deserve too.

The Department of Labor says people who believe they have been subject to a mental health parity violation can contact one of their Employee Benefits Security Administration benefits advisors for assistance at 1-866-444-3272 or visit https://www.dol.gov/agencies/ebsa/about-ebsa/ask-a-question/ask-ebsa. 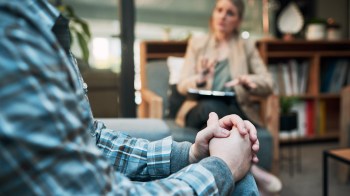 Share your story: Have you experienced a health parity violation?