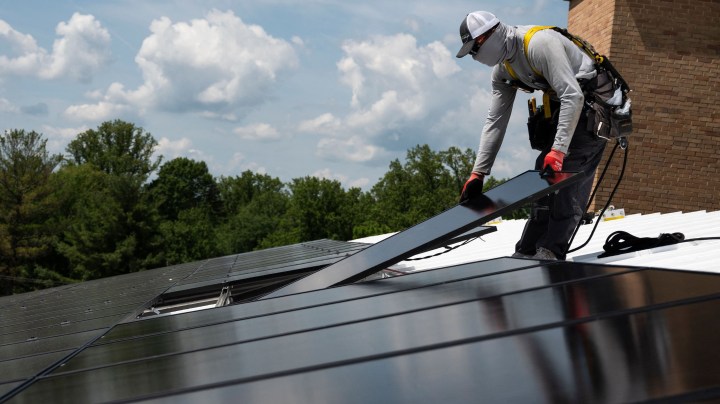 COPY
The Build Back Better bill includes more than $550 billion in environmental initiatives, like tax credits for companies and consumers that install solar panels. Andrew Caballero-Reynolds/AFP via Getty Images

The Build Back Better bill includes more than $550 billion in environmental initiatives, like tax credits for companies and consumers that install solar panels. Andrew Caballero-Reynolds/AFP via Getty Images
Listen Now

The apparent demise of the Build Back Better bill after Sen. Joe Manchin, D-W.V., said he wouldn’t sign it throws into question how the United States will meet its climate goals. Baked into the bill was more than $550 billion aimed at slowing global warming — things like tax credits for companies and consumers that install solar panels or buy electric vehicles, and also financial incentives for U.S. manufacturing of clean energy technologies.

Many environmentalists aren’t too optimistic about the U.S. meeting stated carbon emissions goals if the bill doesn’t get through the Senate — meaning the country might have to figure out a workaround.

“If Build Back Better fails in its entirety, it is very hard to see how the United States achieves the climate goals that the Biden administration pledged we would achieve by 2030 without this legislation. It’s the centerpiece,” said Jason Bordoff co-founding dean of Columbia University’s Climate School.

Biden’s 2030 goals included a reduction of greenhouse gas emissions by half of what they were in 2005 and getting to net-zero by 2050 — all steps to help ensure global warming slows down.

“We don’t really have a plan without the Build Back Better Act to stop the warming,” said Leah Stokes, who teaches environmental studies at University of California, Santa Barbara.

Cities and state governments can help reduce emissions, she said, but this really has to happen on a larger scale.

“Our challenge is really that we need to go faster,” said Kelly Sanders, an associate professor of civil and environmental engineering at the University of Southern California. “And faster is really going to be hard to do without a big federal push.”

And a big federal budget. That was a major part of Sen. Joe Manchin’s problem with the bill; he said it would just add more debt.

Rachel Cleetus at the Union of Concerned Scientists said she hopes this wasn’t a lost opportunity for private industry, too.

“You can see so many businesses wanting to jump in with both feet. And instead, we have Congress continuing to delay action instead of putting the interests of our people and our economy first,” she said.

Cleetus is optimistic that at least some part of the bill will survive. Without it, she said it’s hard for the U.S. to claim to be a leader in climate mitigation policy to the rest of the world.