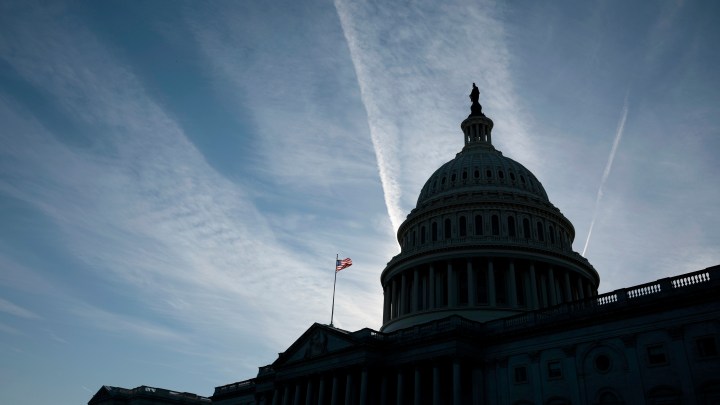 COPY
The Build Back Better Bill is stalled, but it's not the first time that legislation aimed at tackling climate change has been sidelined. Anna Moneymaker/Getty Images

The Build Back Better Bill is stalled, but it's not the first time that legislation aimed at tackling climate change has been sidelined. Anna Moneymaker/Getty Images
Listen Now

Congress doesn’t have a great track record in passing climate legislation — the United States ranked 28th in the world for climate protection measures, according to the Climate Change Performance Index. Policy failures from the last three decades include President Bill Clinton’s proposed carbon-dioxide tax and and President Barrack Obama’s cap-and-trade proposal. Many blame the growing polarization in American politics.

But Shannon Osaka, a reporter from Grist, has a different perspective. In a recent article, she argues that the problem is a fundamental issue with American democracy, because in our political system, it’s much easier to block change than it is to create it. “Marketplace” host Amy Scott sat down to discuss the latest in the Build Back Better plan and why our political system makes it hard to pass climate laws.

Amy Scott: What climate policies are at stake in the president’s Build Back Better agenda? And what would they accomplish if some version of this doesn’t end up passing?

Shannon Osaka: I mean, the Build Back Better plan for climate is just huge. It’s about $500 billion toward clean energy. We’re talking things like tax credits for electric vehicles, for building geothermal, solar and wind power plants. And if this passes, I mean, it will be the biggest climate plan that the U.S. has ever put through Congress. And it will get us much closer on a path to cutting our carbon emissions in line with the Paris Agreement.

Scott: Now, this isn’t the first time that a Democratic senator from West Virginia has blocked a Democratic president’s climate plan. Talk about what happened back in 1993.

Osaka: Yeah, so it’s a pretty crazy history. So effectively, when Bill Clinton was president, he wanted to put through basically what would be a carbon tax, so a tax on carbon dioxide emissions. And it was blocked by the senator named Robert Byrd who was from West Virginia. And he basically said, “I don’t support a carbon tax, because, you know, we have a lot of fossil fuels in West Virginia. It doesn’t suit my constituents.” So the Clinton administration had to try a different tack, and their other backup plan also failed. And so this is just a sign of how in the U.S., we’ve been trying to pass climate policy for such a long time and we just keep getting stuck.

Scott: And often it comes down to one vote or relatively small obstacle, right? In your article, you write about so many times that we could have taken steps that we didn’t.

Osaka: Right, and it’s very interesting, because if we think about the United States, just as you know, an example of a country that’s really struggled to pass climate policy, there are certain sort of structural things about the U.S. that make it really difficult. If you think about being in sort of, you know, middle school civics class, they talk about separation of powers, and separation of powers can be great for a lot of things. But it also means that there’s lots of opportunities to block change, and I think what we’ve seen in the U.S. over the past 20-30 years has been a lot of using that separation of powers to prevent climate policy from passing.

Scott: You also mentioned this term “double representation” to talk about the role that corporations play in this inability to pass climate policy. Can you explain that?

Scott: It seems that, you know, given this history of the failure of climate policy in Congress, you’re actually still hopeful that the U.S. can lead on climate policy. Why is that?

Osaka: Well, I think that when you look at the history, we’ve been so close so many times. I mean, there’s all of these moments where things really could have gone a different way. And, I mean, if you look at the situation now, if Democrats had just one more seat in the Senate, you and I might be having a totally different conversation. We might be talking about, “Oh, the Build Back Better Act just passed. Here’s all the things that are in it for climate.” So there’s this level of sort of randomness or stochasticity that comes in, that means that, you know, we kind of just need everything to line up in the right way. And over the past 20 years, it hasn’t. But that doesn’t mean that it can’t. And I think that, you know, when we’re talking about the majority of people supporting climate policy and really wanting the U.S. to act, I think that that is just going to get stronger and stronger as we move through time. And I just hope that we act before it’s too late.