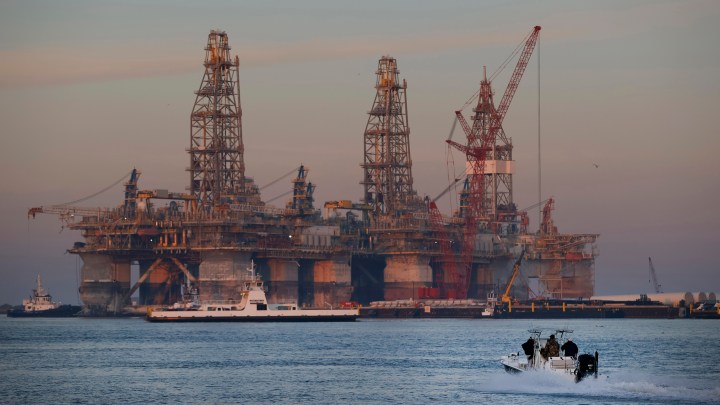 COPY
Drilling of the newly auctioned Gulf of Mexico gas and oil leases likely won't begin for seven to 10 years. Above, a drilling platform off the coast of Texas. Tom Pennington via Getty Images
A Warmer World

Drilling of the newly auctioned Gulf of Mexico gas and oil leases likely won't begin for seven to 10 years. Above, a drilling platform off the coast of Texas. Tom Pennington via Getty Images
Listen Now

The Joe Biden administration has auctioned off $192 million worth of new oil and gas leases in the Gulf of Mexico, the Bureau of Ocean Energy Management announced this week. Exxon, Shell, Chevron and others bought up 1.7 million acres in all.

Blocking new oil and gas leases on federal lands and waters was one of the president’s campaign promises on climate. And he did, temporarily, right after he took office.

But in June — after more than a dozen states sued — a federal judge in Louisiana ordered that the lease sales start again.

Companies won’t start producing oil and gas on the acres they bought this week for a while. More likely, production would start in seven to 10 years.

“And that’s exactly when we need to be well along the way of moving away from a fossil fuel energy economy,” said Drew Caputo, an attorney with Earthjustice, a public interest environmental law firm that’s suing the Biden administration over the sale.

“These sorts of forward-looking, large infrastructure investments in oil, gas, they’re really dangerous for the planet,” he said.

For a president who’s trying to take more aggressive action on climate change, “the optics on this aren’t great, but honestly, it won’t make a ton of difference,” said Samantha Gross, director of the Energy Security and Climate Initiative at the Brookings Institution.

The reason she says it won’t make a ton of difference for the climate?

“As long as someone demands oil and gas, for whatever they’re using it for, someone in the world will produce it.”

And there’s still huge demand for oil and gas — in the United States and globally.

“It’s going to take the world a while to move away from oil, in particular,” Gross said. “Oil overwhelmingly dominates the transportation sector, and it’s difficult to replace.”

Reducing demand for oil in transportation and the rest of the economy would make a much bigger difference than blocking new oil and gas leases, said Ryan Kellogg, a professor of public policy at the University of Chicago.

“That means incentives in technology development to develop alternative modes of transportation away from the cars and trucks that we’re used to,” he said.

And it means doing that at scale, Kellogg said, in a way that can be exported to the rest of the world.