The Bears Ears National Monument in southeastern Utah is remote, vast and controversial. Former President Barack Obama designated the 1.35 million acre monument in the last weeks of his presidency. Now, President Donald Trump is set to announce a plan to shrink it significantly along with another Utah monument called Grand Staircase-Escalante. Some groups worry that if protected areas are opened up, energy development will start moving in.

Since 2013, oil and gas companies have shown interest in leasing more than 100,000 acres inside monument boundaries and within one mine, according to an analysis by the Center For Biological Diversity.

Environmental groups are not the only ones who are worried. Bears Ears is an area covered in thick forests, red buttes, high plateaus, and deep canyons. These places are sacred to some Native American tribes whose ancestors migrated through this land a long time ago. The Bears Ears Inter-Tribal Coalition, a group that pushed for the monument designation, estimates there are more than 100,000 cultural and archaeological sites there.

“I think it’s unlikely that we would see significant exploration and development deep within the monument,” said John Ruple, a law professor focusing on public lands at the University of Utah.

There has previously been some drilling inside the monument but the last well stopped producing in 1992. Now, there are dozens of old, abandoned oil and gas wells still there. But Ruple is skeptical that drilling could start back up in any serious way.

“That area is just too inaccessible. The oil and gas potential is very low and the cost of getting any product out to a refinery and to market would be very high,” Ruple said.

But producers are working on the fringes, to the east and the north of the current boundaries of the Bears Ears National Monument. According to the Utah Bureau of Land Management, there are 23 existing federal oil and gas leases, all at least partially or wholly located within the boundaries, but no permits to drill on those leases, for now. 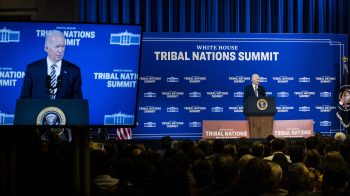