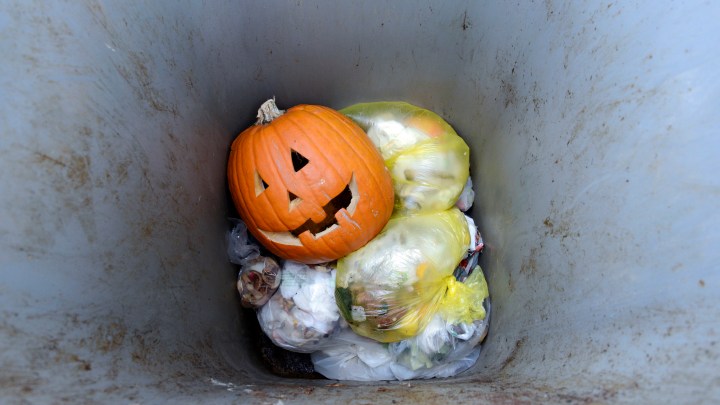 A jack-o'-lantern sits in a garbage can after Halloween night. rudigobbo via Getty Images

A jack-o'-lantern sits in a garbage can after Halloween night. rudigobbo via Getty Images

After a rather quiet, socially distant Halloween 2020, Americans are ready to celebrate. Big time.

Just how big? According to a survey by the National Retail Federation, consumer spending is expected to reach $10.14 billion, the highest on record. That’s more than $10 billion on plastic-wrapped candy, quickly-grown-out-of costumes, polyester cobwebs and seasonal window clings that don’t quite cling all that well.

In short: waste, and lots of it.

“A single trick-or-treater generates one pound of trash at Halloween,” said Lisa Morton, an expert who quite literally wrote the book (multiple, actually) on the holiday. “ When you consider that we have over 40 million trick-or-treaters, boy, that is a lot of trash.”

A 2019 investigation by U.K. environmental group Hubbub found that some 83% of Halloween costume materials were oil-based plastics likely to end up in a landfill. That equates to some 2,000 tons of plastic — which equates to roughly 83 million soda bottles — in costumes alone.

While costumes are leading environmental culprits and have been knocked for epitomizing fast fashion, the less conspicuous pumpkin also plays a role. An estimated 1 billion pounds of pumpkin are sent to landfills in the aftermath, where they produce harmful methane gases as they decompose.

Then there’s the candy. Oh, the candy. Most of those fun-sized candy bars that have become synonymous with Halloween are wrapped in plastic that’s notoriously difficult to recycle.

A scary increase in commercialization

Morton feels the eye-popping expenditure on Halloween 2021 can be explained by the pandemic.

“We always see a big spike in Halloween celebrations after something that’s very traumatic. Like after 9/11, 2001 was a huge year for the holiday, coming just six weeks after this terrible tragedy,” she said. “Halloween not only survives those things but seems to flourish, and I think it is because it provides an escape.”

This year, each Halloween reveler is expected to spend an average of $102, per the NRF. It wasn’t always such a big-money holiday, Morton said.

As trick-or-treating was gaining popularity in the 1930s, costumes were homemade — think ghosts made from bed sheets and DIY masks and costumes (which would tend to out-creep modern, store-bought varieties). Treats, back then, were usually things like candied apples or popcorn balls.

Decorating, costume-making and treat creation were largely left to stay-at-home mothers. Then, manufacturers stepped in. Hershey’s and Nestlé saw and took the chance to monopolize the fun-sized chocolate game. In the ‘50s, companies began to license and manufacture costumes of characters from popular films or television shows.

While the market can introduce problems, it can also introduce solutions to them.

Rubicon, a recycling solutions company, has aimed to lessen candy wrapper waste through its Trick or Trash program. Schools and businesses are given boxes to collect up to 10 pounds of candy wrappers, then sent off to be cleaned, ground up and transformed into plastic pellets that can then be recycled into plastic products.

The program launched in 2019 with fewer than 500 schools; this year, some 2,000 schools and businesses are participating, according to Dan Sampson, Rubicon’s chief marketing and communications officer. Rubicon hopes to launch the program internationally next year.

Second-hand and thrift stores have also positioned themselves as unofficial Halloween headquarters. Goodwill has a web page devoted to the holiday. Some of its stores even have “costume experts” to help customers piece together their Halloween looks.

Individuals have aimed to cut Halloween waste through other channels. Some parents have given away or acquired second-hand costumes using online no-buy groups. Take Amber Haukedahl, founder of the Minneapolis-based zero-waste store Tare Market.

“I put out a call saying I’m looking for a farm animal costume,” said Haukedahl, who has a child who’s almost two. “That’s an easy enough family costume, all of us are farm animals — and had someone write back immediately saying they had a cow costume. And what’s cuter than a kid in a cow costume?”

When her child outgrows the costume, she plans to pass it on once again.

For decorations, Haukedahl prefers a minimalist approach — both for time and ease. She opts for locally-sourced gourds and pumpkins, later used in cooking or composted.

When it comes to trick-or-treaters, she sees little choice but to go with store-bought treats in candy wrappers. “It’s the cultural norm. I just accept that purchasing candy in wrappers is what’s considered appropriate and safe,” Haukedahl said, adding that she plans to collect candy wrappers in her community for recycling using TerraCycle, a provider of recycling solutions for difficult-to-recycle materials.

Though it heartens Morton to see people and organizations reducing their Halloween waste, she thinks that it’d likely be hard for Americans to wholly cut off some of their favorite holiday traditions.

“I mean, I think we can say that the individually wrapped candies probably go back 70 years. And the carving of pumpkins at Halloween really became popular around 1900,” she said. “We’re looking at a tradition that’s been around for well over a century. That’s going to be hard to change.”

There is one thing that Morton, an avid gardener, knows to be true: She’ll be composting her pumpkins this year. 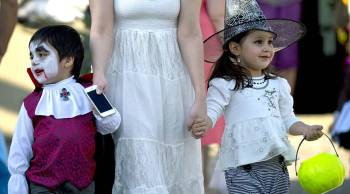 The Conversation: How do you spend on Halloween?