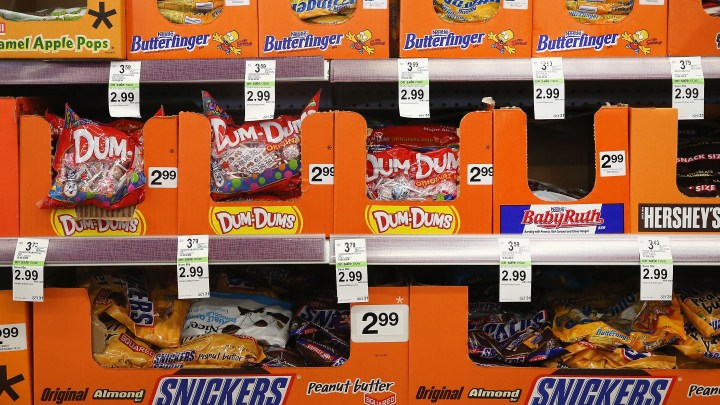 Full size candy bars are a commitment. Scott Olson/Getty Images
Brought to You By

Maybe you have them marked down on a map. Or maybe you know where they are by heart. You study them, remember year after year which street to turn down. You might even leave your own neighborhood and drive to them. They’re the houses that hand out full-size candy bars on Halloween.

Full size seems to get all the hype, and there’s a rumor that promoting smaller candy bars as “fun size” is a dirty marketing trick. But candy historian Beth Kimmerle would argue otherwise. To understand how the fun-size candy bar came about, Kimmerle said we must first understand the role that the full-size candy bar played in U.S. history.

“They gained enormous popularity in the 1920s and ‘30s, during the Great Depression, because they were the original meal replacements,” Kimmerle told Marketplace. “We didn’t have aisles and aisles of granola bars, or the category that we call snack bars now.”

The candy bars — especially the ones that had some kind of nut — had a decent amount of protein and were relatively filling, Kimmerle explained.

“For many years, bigger was better because you got a bigger meal for your money,” she said. “Consumers were looking at this like, ‘What can I get for my 5 cents?’”

But bigger isn’t always better. For one, Kimmerle said, full-size bars are a real commitment. They’re not exactly convenient to carry around, and sometimes you just want one or two sweet bites. Fun-size candy bars fall into a category of candy called “hand to mouth,” which are usually smaller, individually wrapped and more convenient for a quick sweet treat.

Fun size gained traction not because the candy companies were trying to capitalize on a holiday, but because consumers liked them.

“Really, the wave of fun size began in the 1950s,” she said. “It was an effort to capitalize on all sorts of occasions when people wanted a smaller piece of candy.”

Those occasions include a bowl of candy at a receptionist’s desk or throwing a piece in with a kid’s lunch every so often.

Today’s calorie counting has also played a part in the popularity of fun-size candy bars. In 2017, the big companies vowed to make half of their individually wrapped treats under 200 calories by 2022.

“In this era of on-the-go eating and convenience eating, I think it makes sense that these things are in these smaller packages,” Kimmerle said.

Maybe not everyone is aboard the fun size train, but that doesn’t seem to make a dent in how much we shell out for Halloween candy. The National Retail Federation estimates $2.6 billion will be spent on candy in the U.S. this Halloween season. So on the spookiest night of the year, maybe throw out the map and embrace the fun of fun-size candy.

Correction (Oct. 25, 2019): A previous version of this story misstated the estimated amount U.S. consumers will spend on Halloween candy.