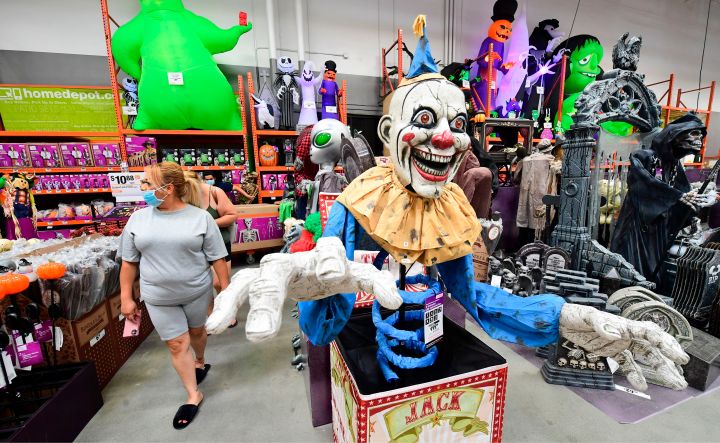 COPY
Halloween is a nearly $9 billion industry, according to the National Retail Federation. Above, people shop for Halloween items in Alhambra, California. Frederic J. Brown/AFP via Getty Images
COVID-19

Halloween is a nearly $9 billion industry, according to the National Retail Federation. Above, people shop for Halloween items in Alhambra, California. Frederic J. Brown/AFP via Getty Images
Listen Now

Halloween is bound to look a lot different this year, with limited group gatherings and social distancing to prevent the spread of COVID-19. Costume parties are out of the question, and some cities have gone as far as making recommendations against trick-or-treating.

All of this is going to affect sales of Halloween costumes, decorations and candy, a nearly $9 billion industry, according to the National Retail Federation. So businesses are trying to figure out how to turn this year’s trick into a treat.

For 27 years, Headless Horseman Hayrides and Haunted Houses in Ulster Park, New York, has been exactly what it sounds like — hayrides and haunted houses. But this year, piling 35 guests into a wagon won’t work. So the hayride has become a drive-thru, with a spooky soundtrack riders play through an app.

But making the change wasn’t easy. The hayride is usually a huge production, with nearly 400 carpenters, makeup artists and actors. “Our entire show is themed and scripted,” said Michael Jubie, who owns the business with his wife, Nancy. “On a normal evening, we have a storyteller that travels on every wagon. I like to describe it as a traveling play.”

This year, guests will be contained to their cars and actors stationed alone on the trail. That comes with some theatrical sacrifices.

The shift came with financial sacrifices, too. Jubie spent thousands of dollars converting the trail to make it car friendly by building barriers and buying speed bumps. And he lowered ticket prices by $10. Jubie is just aiming to break even this year, which is challenging because he can only run at 25% capacity.

Plus, Halloween is a seasonal business.

“You really cram it down into about three weeks,” said Kevin Johnson, chairman of the Halloween & Costume Association.

Johnson expects the retail window for costumes and candy to get even smaller this year because people are waiting until the last minute to decide if it’s safe to trick or treat.

But throughout the pandemic, plenty of people have continued celebrating occasions. The celebrations just look a little different.

In April, his company’s sales of bunny costumes were significantly up from the year before because more people celebrated Easter at home. Fallenstein thinks parents might go all out this Halloween to make up for the pandemic, with decorations and Zoom costume parties. Boo bags, little gift bags homeowners fill with candy and put outside so they don’t have to answer the door, are trending.

And, of course, what is more 2020 than masks? Halloween has plenty of them.

“We expect people to just feel safer in something like that. You know, if you see a costume like a Darth Vader costume with a full mask or, you know, the gloves to go with Spider-Man,” Fallenstein said.

The Centers for Disease Control and prevention warns costume masks do not replace cloth masks. But there’s always the classic, mask-friendly costume companies are stocking up on: doctor.