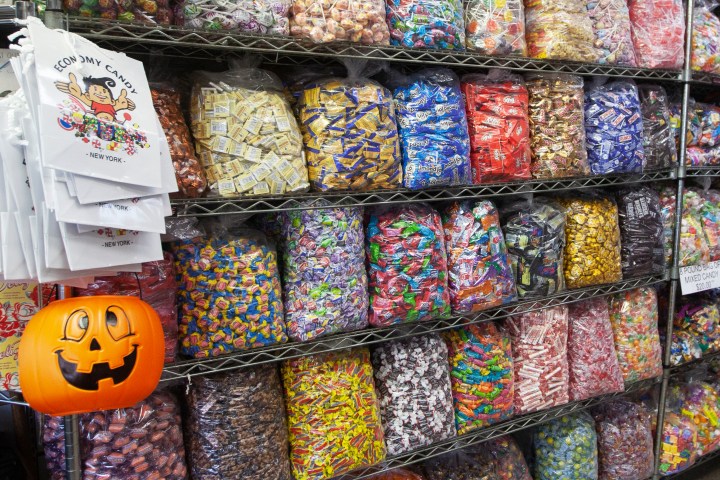 Bags of the sweet stuff at Economy Candy in New York City. Jana Kasperkevic for Marketplace
The Season

Bags of the sweet stuff at Economy Candy in New York City. Jana Kasperkevic for Marketplace

For weeks now, Halloween candy has lined store shelves, giving people a chance to stock up, eat it all and stock up all over again. Candy, like costumes and scary decorations, is an essential part of the holiday. According to the National Retail Federation, 95% of Americans who will be celebrating Halloween plan on buying candy. Overall, $2.6 billion will be spent on sugary goods.

You’d think with so much money to spread around, there would be thousands of different candies available for trick-or-treaters, yet most Halloween treat bags end up with a combination of the same dozen candies. You know the ones: Snickers, Kit Kats, Reese’s Pieces and so on.

We set out to find out why.

Stick with what you know and love

Most people stick to the same candy, because that’s the stuff they want to eat themselves, said Mitchell Cohen, owner of Economy Candy in New York.

“A lot of people go towards their favorite candy, because if they get left with it, they want to have something that they want,” he explained. “That’s why you see some people giving out the same thing every year, because they know if they get left over with a pound of Kit Kats, they are going to be happy.”

A recent poll of 1,161 adults by The Monmouth University found that top-selling Halloween favorites are household names that are available year round. The eight top selling candies were:

There’s more to our choices than wanting to gorge on our favorite candy after the trick-or-treaters are gone, said Darren Seifer, food and beverage industry analyst at The NPD Group.

“From a business perspective, it’s a big gamble to introduce innovation during a seasonal period,” explained Seifer. “If it doesn’t work with consumers you’ll have to wait an entire year before you start making up for the loss. And for some marketers, that’s too long.”

Cohen, who is a third-generation candy shop owner, said candy companies first introduce new candy as full-size items. For a candy to get a fun-sized treatment — replicating full-size items in smaller sizes popular on Halloween — there has to be a lot of demand, he said. That’s what happened when the Hershey Co. introduced the Take 5 candy bar in 2004. Within years, the candy became so popular that Hershey decided to include it in its Halloween fun-size chocolate mix, explained Cohen.