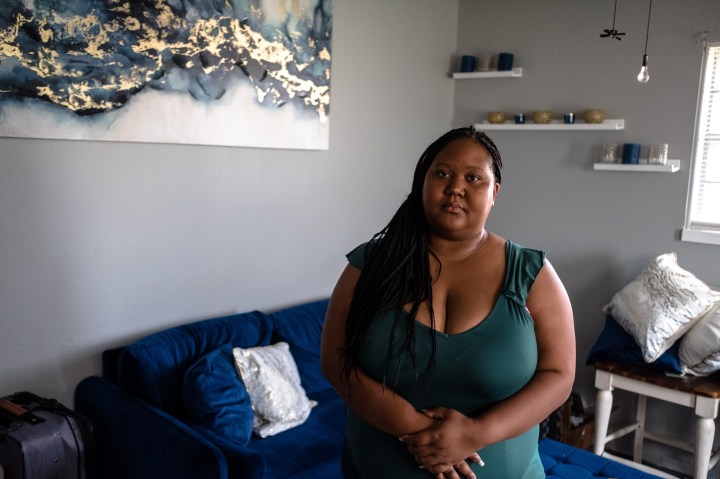 COPY
After Tara Jones, an Amazon warehouse employee in Oklahoma, reported money missing from her paycheck, an internal investigation revealed the problem had been going undetected for over a year. Joseph Rushmore for The New York Times

After Tara Jones, an Amazon warehouse employee in Oklahoma, reported money missing from her paycheck, an internal investigation revealed the problem had been going undetected for over a year. Joseph Rushmore for The New York Times
Listen Now

Amazon is the country’s second-largest private employer. And while the company is known to customers for delivering packages quickly and generally accurately, new reporting from The New York Times details major glitches in Amazon’s handling of paid and unpaid leave for its workers — resulting in paycheck errors at as many as 179 Amazon sites, mistaken terminations and other issues.

The New York Times’ Pulitzer-prize winning investigative reporter Jodi Kantor and Times technology reporter Karen Weise spoke to Marketplace’s David Brancaccio about their reporting. The following is an edited transcript of their conversation.

David Brancaccio: Tell me about a warehouse worker in Oklahoma, Tara.

Jodi Kantor: Tara had a baby last year. And right after she had the baby, she was still in the hospital, she looked at her pay stub on her phone and she noticed a problem. Her pay was supposed to be $540 but the check was only for $450. And so she contacted the company and said, “Hey, there’s a problem here,” and it was not resolved quickly. So she eventually grew so exasperated, she’s sitting there, trying to pay for diapers, that she emails Jeff Bezos. Unbeknownst to Tara, that launched an internal investigation at Amazon that discovered that not only was she correct, and her pay was wrong, but that the problem — which was embedded deeply in Amazon’s systems — had been going undetected for about a year and a half, and that as many as 179 Amazon sites had been affected. And what we found is that this story was not an isolated example; that Amazon’s leave system has really deep problems that have been causing consequences for workers for years.

Brancaccio: So this is about when employees apply for paid or unpaid leave — often their paychecks get shorted, or sometimes people lose their jobs over these glitches.

Karen Weise: Yeah, it’s a very complex network of back office call centers and online systems that don’t necessarily talk to each other — which is, of course, confusing for Amazon, this technology giant. We found problems with people being underpaid; with them being accidentally fired because they were being marked as abandoning their job when in fact they were on an approved leave. And it’s kind of a well known, well documented failure within the company. We have hundreds of pages of internal documents where they self-assess these problems. So, on one hand, you have this failure to serve their own employees — and don’t forget, this is the second-largest private employer in the country, on the path to be the largest. They also have this internal acknowledgement of, “We’re not doing what we can and should be doing.”

Brancaccio: You spoke to a Amazon employee who was dealing with issues of domestic violence, and who happened to work in a state with strong protections for people who are going through these kinds of ordeals. And it sounds like there’s evidence that Amazon’s system could not cope with that.

Weise: Yes, this is a situation that Leslie Tullis faced. She’s a woman who worked in Seattle at Amazon’s corporate headquarters building a product for kids, and she faced a domestic violence crisis at home. Washington state has protected unpaid domestic violence leave — which means you can take time off, as much as you need, intermittently, to deal with this ongoing crisis. And so she applied for this leave. It took many, many hours a week to get the approval she needed just to manage the time off, let alone take the time off and deal with what her family needed. And she took time, off and on, over the course of almost two years, but ultimately was put on a performance plan. Amazon was saying she wasn’t performing, and that it was separate from the problems with her taking time off. And she was saying that she was being retaliated against because she was taking this protected leave and she was basically being punished for it. Ultimately, she missed a deadline by two days because of two days of crisis she had, and then Amazon wouldn’t move that deadline by two days, and they fired her. And Washington state’s attorney general has now taken up her case and said that Amazon retaliated illegally against her for taking this protected time that is designed to help people in emergencies. Domestic violence is unpredictable. She wrote to her managers and said, “I don’t choose this. But this is what the reality is and what this law is designed to protect.”

Brancaccio: So I’m clear, are we talking Amazon warehouse workers? Are we talking about the corporate employees? Everybody?

Kantor: We’re actually talking about the same systems. And we’re talking about a problem that not only affects hourly workers, but affects higher-paid corporate workers as well.

Brancaccio: Is Amazon reacting specifically to your latest piece, here?

Kantor: They are. For the most part, they acknowledged the problems. They put us on the phone with the new head of disability and leave services, who didn’t really contest our findings. And what they essentially said is that they recognize the problems, they regret the problems, and they are moving quickly to fix them. They describe trying to implement better communication, for example, with their employees; clearer guidelines; they’re trying to redo the technical back end to avoid some of the problems that have occurred in the past. But the question still remains: how many people were negatively impacted by this — including at a time when Amazon was hitting record profits?

Brancaccio: What you’re saying here is: Are there more people who ended up losing a job over this, or there are other people who found their paycheck shorted in one way or another? There may be more forensic accounting to do.

Kantor: In fact, Amazon said that they are still tracking down and auditing the problem and trying to repay people.

Brancaccio: And what’s the timeframe — maybe sometime late winter that they think they’ll be able to demonstrate some improvements?

Weise: They said they’ve already been rolling out improvements, but they do have a series of ongoing plans stretching through the next three years, they said, to make improvements. For example, we documented a particular breakdown between two technology systems that don’t talk to each other, which meant that people were being flagged as abandoning their jobs when, in fact, they were on approved leave. And so that fix is scheduled for March, for example. But they have what they call a three-year plan to really bring the system up to the full level that they expect to be able to serve their employees at.

Brancaccio: So if Amazon is trying to deal with this, and has new people on the case, what more do people want from Amazon?

Kantor: I think there are a couple of questions. First of all, it’s really hard to say how many people have been affected by this. And Amazon currently has over a million employees; it cycles through people very quickly — so there are many, many, many people all over the country who used to work at Amazon and may have been affected by this. And so I think there’s a question of how much better Amazon systems can get; what sort of harm has been done in the past. And then there’s also a gigantic debate going on about leave, in Washington D.C., and the fact that this country doesn’t really have the same protections for people who get sick, or new parents, as other countries do; and whether it should be left up to private employers to try to implement this; and what really happens within the bowels of the system when they do.

Brancaccio: And Amazon’s HR employees, who have been working hard to deal with some of this, they’re feeling overloaded themselves?

Kantor: Yes, we’ve spoken to HR people all over the country and one of the key findings was that HR people just kept telling us that this was a problem. They would say “Yeah, the software will take somebody who has applied for a leave, often for illegitimate reason, and instead, there’s a mistake, and these people get terminated. And if they come back to us, we can try to reinstate them, but very often these people just disappear.” And a lot of the HR workers felt unequipped to do anything about it. They basically felt like, “I’d like to do the right thing here, but it’s not doable given the circumstances.” And so that’s when we knew that there was a serious problem, because the kind of pattern of what HR people from one warehouse to another were saying was so strong. But we still needed more evidence to show that this was really systemic and not just a mistake on the margins here and there.

Brancaccio: It really demonstrates the challenge of a business model that, yes, is all about zeros and ones floating through the internet, but is very reliant on actual living, breathing human beings to get the job done.

Kantor: Absolutely. And human beings with messy lives. These are vulnerable workers who are dealing with some great things, like new parenthood, but in a lot of cases, some of the worst crises and tragedies that can fall into anybody’s life.

“We’re disappointed when any of our employees experience an issue with their leave. The NY Times article suggests these issues are wide-spread and ongoing. They are not. In fact, the controls we’ve implemented over the last 18 months have resulted in less than 1 percent of people experiencing an issue while being on paid leave. Certainly the unprecedented nature of COVID did put a strain on our system’s ability to keep pace with demand and we’ve been hard at work investing and inventing to do better every day.“