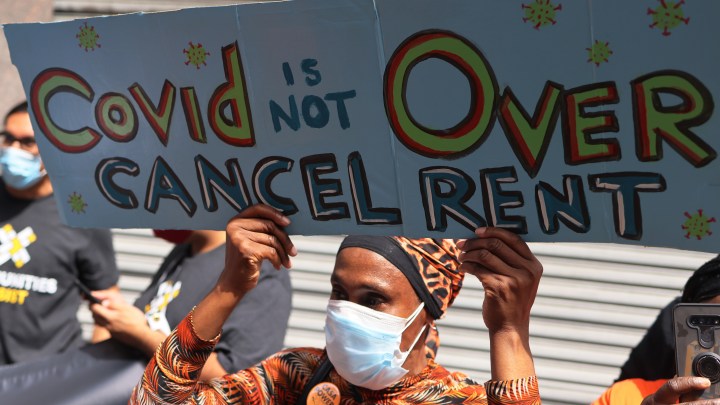 When Andrea Brown met up with her landlord, Moshe Attas, recently, she took the opportunity to tease him about his new, short haircut. She liked it better long.

“He had hair like — what’s his name — Mick Jagger?” she said, laughing.

“I couldn’t stand it,” Attas said.

The two had come to the offices of Community Legal Services, in Philadelphia, to share their experience with the city’s year-old Eviction Diversion Program. Attas manages several properties for an investor, including the row house Brown has been renting for three years. The way they chatted that afternoon, you’d never know they’d been anything but friendly.

“We have a good relationship, although I took her twice to court,” Attas said.

“Good” might be a stretch. The first time Attas took Brown to court was before the pandemic. Brown had broken her leg, couldn’t work as many hours as a home health aide and fell behind on her rent. Attas filed an eviction. Ultimately Brown came up with the money and stayed in her home.

A few months later, the pandemic arrived. She and her partner lost their jobs, and their kids had to go to school online.

“How can I work if I have five children that’s not in school?” she said. “I’ve been a teacher. I’ve been a therapist. I’m doing mom stuff, but I can’t pay the rent because I don’t have a job.”

As of last October, Brown was $5,600 behind. By then, there was a federal eviction moratorium in place, and the city of Philadelphia had enacted its own protections. Before a landlord could take any steps to remove a tenant affected by COVID-19, the parties had to go through mediation.

That’s when Megen Karakelian entered the picture. She’s a lawyer and volunteer mediator with the Eviction Diversion Program. A conference call was arranged with tenant, landlord, mediator and a housing counselor from a local nonprofit.

First, Karakelian said, she laid down the ground rules: Be respectful and courteous, no interruptions. Her job is to be neutral, but she understands the inherent power imbalance in the landlord-tenant relationship. She tried to put Brown at ease.

“Because it is a formal program, it almost feels threatening in a way,” she said. “There’s a little bit of trying to remove that threat and saying that ‘no one’s in trouble here,’ and, ‘yes, you owe the landlord a lot of money and we’re going to try to figure that out, but you also have rights.’”

Brown also had some complaints. A plumbing leak had caused part of the ceiling to collapse, she said, and several of her baseboard heaters weren’t working. Mediation gave her a chance to air her concerns. It was much better than going to court, she said.

“They speak in the court language, which you don’t understand, and there’s lawyers. They’re way more educated than you,” Brown said. “Mediation actually had a chance for us to sit down and talk to each other like human beings.”

In about an hour, they worked out a deal. Brown had already applied for emergency rental assistance from the city. Until it came through and she could pay off her debt, Attas would lower the rent from $850 to $700. They also agreed to split the cost of the outstanding water bill, and Attas would make repairs.

Attas said he prefers mediation too. For one thing, evictions are expensive, he said. “I think businesswise, it is the right thing to do,” Attas said. “We should keep the tenant in the home.”

Housing advocates credit Philadelphia’s program with keeping hundreds of tenants in their homes. Of more than 2,300 mediations so far, officials say more than 90% either ended with an agreement or the parties agreed to continue negotiating. The program has also helped distribute millions of dollars in federal emergency rental assistance. As of April 1, any landlord seeking to evict a tenant for nonpayment of rent must first apply for assistance and participate in mediation.

“We’ve seen that it’s a good alternative to going to court,” said Vikram Patel, a housing attorney with Community Legal Services. “Going to court, it essentially just becomes about the property and returning possession of the property, whereas here, it’s about the relationship.”

But mediation can only go so far. After Attas and Brown reached an agreement last fall, Brown did receive some rental assistance, but not nearly enough. She still couldn’t work, and after making one monthly payment, she stopped. Months went by.

“When I failed to do my part of the agreement, then that’s when he was able to file for eviction,” Brown said.

And that brings us to the second time they wound up in court. A hearing was scheduled for August. Even though a federal eviction moratorium was still in place, Brown feared the worst. She packed up her house and took the kids to her mom’s place.

“I just didn’t want to have them in that type of situation,” she said. “Police coming, they lock the door. You’re grabbing plastic bags and trying to throw whatever you can in. I don’t want them to ever experience that.”

But when she showed up in court, she got a surprise. Attas revealed that $9,000 in additional rental assistance had finally come through — just $560 short of what Brown owed. During a break in the proceedings, Attas said he looked over at Brown, “and then I closed my computer, went to Andrea and said, ‘Andrea, let’s talk.’”

They went outside and talked. Brown said their previous mediation made that possible.

“I look at him like he’s not my enemy, so why can’t I talk to him?” she said. “We worked something out on our own without the lawyer and the judge.”

“That’s the whole point of the program, is to just create a nonthreatening dialogue,” mediator Megen Karakelian said when she found out what happened. “That just makes me so happy, that they were able to have that conversation.”

Brown agreed to pay the $560 within three days, and she did. With her kids back in school, she had a new job working at a meat shop.

“She’s caught up,” Attas said. “Except for this month, but we said Monday.”

Brown confirmed she’d pay the September rent the following Monday. But she was soon facing a new challenge: Brown, her partner and children all came down with COVID. Unable to work, she fell behind once more.