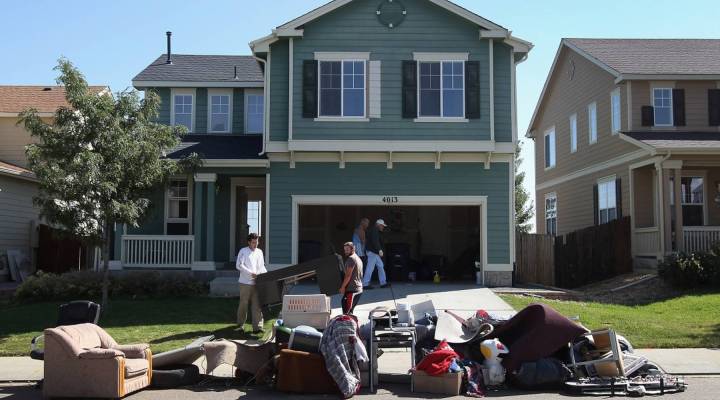 An interview I did with Princeton sociologist and MacArthur genius grant winner Matthew Desmond a couple of years ago really stayed with me. He did a deep study of people getting kicked out of their apartments, and there was a story of a family who got evicted because ambulances came too many times for a child with asthma. Desmond’s book “Evicted” focused on Milwaukee, but he’s just released a new set of national data showing evictions around the country are comparable to foreclosures at the height of the financial crisis.

He joined us to discussed the findings, which were published by Princeton’s Eviction Lab. Below is an edited transcript of the interview.

David Brancaccio: So in the year 2016, you found that there were nearly a million evictions that year. Give me a sense of scale.

Matthew Desmond: This is the first time we’ve really been able to look at evictions at a national level. And so a million evictions, about 900,000 evictions, that equates to about an estimated 2.3 million people evicted in that year, many of them children. So, how do we get our hands around that number? That’s about 6,300 people a day that are evicted. That’s twice the number of people who die in car accidents every day in America. We heard a lot about the opioid epidemic last year. There were about 63,000 drug overdose deaths from opioids in the U.S., which means there are 36 evictions for every tragic overdose victim that year. This means eviction is an enormous problem. It’s a problem of enormous consequence in the country.

Brancaccio: And that number you’re citing is just official evictions ordered by a judge. Sometimes one just gets evicted by the landlord, right?

Desmond: That’s the scary thing. So the number that we have is an underestimate for two reasons. One is, you know, we don’t have every single formal eviction in America — an eviction that’s processed through a court system — because some cases are sealed, like they do in California. Other places, it’s really hard to get them because it’s a very remote area. So we have the largest data set of evictions in America today, but we don’t have everything. And the largest data set of formal eviction doesn’t count these kind of informal evictions that never go through the courtroom. These are when a landlord pays you to leave or maybe commits an illegal lockout. So these numbers are scary, and they’re very high, and they’re probably underestimated by a significant degree.

Brancaccio: Now I took a look, I was wondering if it’s just the big, expensive cities. It’s not, right?  I see, for instance, Philadelphia which is a not-as-expensive city. And then you have some smaller cities?

Desmond: We are learning so much about where evictions are happening in the country. If you read the news, you’d think that the housing crisis is basically in Seattle, and New York City, and San Francisco. And that’s true. You know, the rents in those cities have really exploded over the last decade. But when you look at evictions, you don’t see them only happening in those places. In fact, the hotspots of evictions are in cities that don’t get a lot of coverage. So, Philadelphia is one of our poorest large cities, there’s about 80 evictions happening every single day in that city, even though there’s relatively low housing costs. Compare that to a city like Portland, one of the hottest housing markets in the country, and you see that in Portland, it looks like evictions are actually on the decline and they’re certainly lower than in Philadelphia.  What this data set allow us to do, I think, is to recognize that the housing crisis is much bigger and deeper than we thought. It’s not just on the coast or in our global cities, it’s in a lot of different places. It raises all these questions about what’s going on, questions that we know that we can’t answer by ourselves, which is why we wanted to get the data out as quickly as we could.

Brancaccio: I’m sure you’re curious, does public policy in a given city contribute to more evictions or fewer?

Desmond: This is one of the things that we really don’t have a solid answer to. Does this policy work here better than here? What really drives down an eviction rate? Now the data are here and will allow us to get after those kinds of questions. It also allows us to understand just the effect that eviction has on our schools, on our hospitals, on our children, in our neighborhoods. I think the question about the role that eviction plays, and housing instability in general plays, in so many social problems we really care about has kind of been beyond the reach of science and research. And what we’re hoping the people do with these data is to take them and put them to use, and start getting to work after those questions.

Brancaccio: Now, I want to get back to an important point from your original book, Evicted. If people are listening to this right now thinking, well they didn’t pay their rent, they got evicted. That is not always the case in America?

Desmond: That’s right. We’re in the middle of a housing crisis. We’ve seen incomes for Americans of modest means stagnate over the last two decades, but rents have soared and most low-income families who qualify for housing assistance simply don’t get it. You know, we just don’t have enough public assistance or affordable housing vouchers to go around. Only about one in four families who actually qualifies for this aid gets it. The waiting list for public housing in some of our biggest cities is now counted in the decades. So, when we think of a low-income family today, we shouldn’t think of them as living in public housing. We should think of them on the private rental market, getting no help from the government, and spending over half of their income on housing costs. One in four poor renting families are spending over 70 percent of their income just on rent and utilities. And when you’re in those conditions, a really small thing can lead to an eviction. You’re also right that not all evictions are caused by non-payment of rent. Sometimes it’s a domestic violence situation. In many cities, landlords don’t have to give any reason to evict a tenant. So the big reason there’s so many evictions is because of the affordable housing crisis and the inability of low-income renters to make the rent, but there’s also a lot of other reasons going on too.

Brancaccio: I remember an example from the book, what was it, a child had asthma, so the ambulance came quite a bit. That bothered the landlord allegedly and out was the family.

Desmond: Yeah, this was a big surprise from earlier work that we did. You know, I thought that if you lived with children, your chances of getting an eviction would actually go down, that children would protect you from having your things thrown on the street, but it’s actually the opposite. You know, if you live with children, the chances of you getting an eviction judgment actually triple, all else equal. That’s because, in the words of one landlord that I spent time with: you know kids cause us headache, you know, kids can destroy property or gain the attention of the police or an ambulance, like you said. So often, with low-income families, it’s being in a financially precarious position, plus something else — you know, plus you got pregnant.

Brancaccio: You run the Eviction Lab at Princeton. You alluded to this, but it’s your hope that engaged people listening to this, but also researchers will use your data?

Desmond: Absolutely. The Eviction Lab is kind of a collection of scholars and researchers here at Princeton that are just nerding out on these data all day long, and trying to get them right and validate them, but also working with a committed web team to present this data in a really intuitive way. So if you’re a high school teacher, or on your city council, or a concerned citizen, or a faith leader, you can go to this website called Evictionlab.org. You can look on this map, and you can download PowerPoint slides, or customized reports that tell you how many evictions happen in your community, what is your city like compared to other cities like yours, what have evictions done over time, where are the eviction hotspots in the places you live. You can circulate this information on social media. You could take it to your elected representatives and you could start having a conversation about what you can do about this problem in your own communities. It was really important for us to see ourselves not only as a research endeavor, but also as a public service, and that’s how we’ve treated the data.