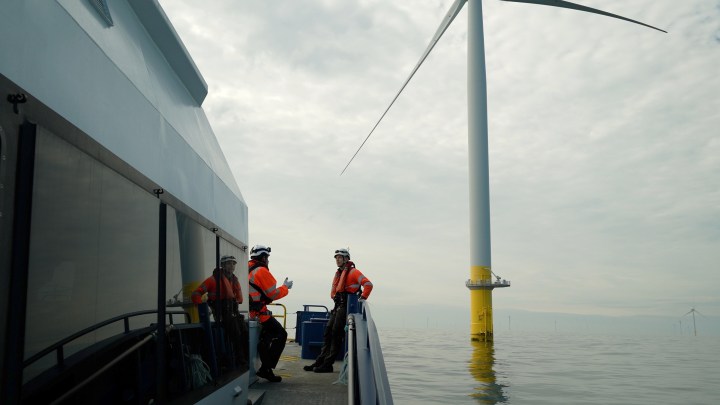 COPY
Rough weather in the North Sea makes it a great place to install wind turbines. BBC
A Warmer World

In just a few weeks, world leaders will convene in the city of Glasgow, Scotland, for the United Nations’ COP26 summit on climate. Since the United Kingdom is hosting the summit, we’re taking a closer look at one of the U.K.’s most promising green sectors: wind energy.

The U.K. is a global leader in wind energy. The world’s largest offshore wind farm, Hornsea One, is located off the east coast of England. Recently, we braved the choppy waters of the North Sea to visit Hornsea One and meet the team that keeps it running.

The crew lives on a bright-red service vessel, floating beside 174 giant wind turbines, which each stand about 650 feet tall. The engineers work 12-hour shifts for 14 days straight, then get two weeks off back on land.

It can be tough work, but the wind industry is creating thousands of well-paid, skilled jobs. Most of them are in places along the east coast of Northern England that have seen their traditional industries, like fishing, decline.

“My granddad went to sea when he was 14 as a cabin boy. For seafaring families like mine, offshore wind is really giving more options,” said Dan O’Toole, operations manager for Hornsea One. “Eighty percent of our workforce come from within an hour of our operational hub. It’s really opened up a world of opportunities that didn’t exist 10 or 15 years ago.”

The work may be tough, but the service vessel includes many creature comforts to keep the crew happy. Everyone gets their own cabin. There’s a big lounge for watching movies and playing video games, plus a gym for blowing off steam. And, at least in my opinion, the food served in the mess is also pretty good.

The rough weather of the North Sea makes it a great place to install wind turbines. Orsted, the company that runs Hornsea One, said that each turn of a turbine’s blades can generate enough electricity to power the average U.K. home for a day.

But choppy seas also make it tricky to service the turbines. Maintenance crews face waves up to 10 feet high, and the crane that hauls the maintenance gear up to the turbines doesn’t always work.

Unpredictability is part of the job, said engineer Josh Gallagher.

“You’ve got to remain open and ready for whatever could arise.” He’s proud that this green technology is being developed in the northeast of England, near his hometown. “We’re really lucky to have it on our doorstep. I don’t take that for granted at all.”

And Hornsea One is just the beginning. Orsted has almost finished an even larger wind farm next door. When it’s completed, Orsted said, the Dogger Bank Wind Farm will be able to power 6 million U.K. homes.