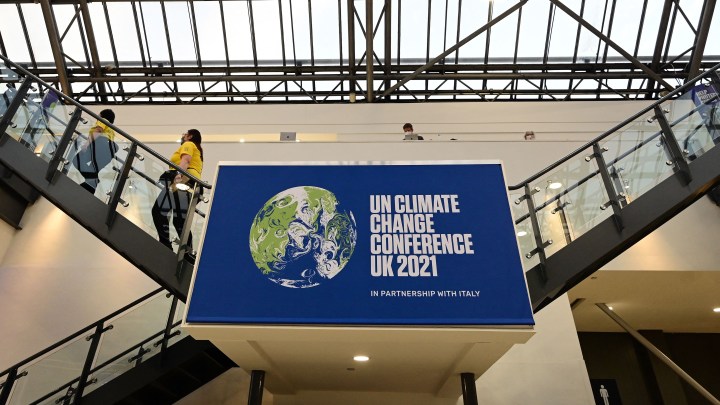 COPY
On Thursday, more than 20 countries pledged to redirect investments from fossil fuels to clean energy. Above, signage inside the COP26 United Nations climate summit in Glasgow, Scotland. Paul Ellis/AFP via Getty Images
A Warmer World

On Thursday at the United Nations COP26 climate conference, the United States and more than 20 other countries pledged to stop financing international fossil fuel projects that emit any carbon into the atmosphere by the end of next year and to instead redirect the money into financing clean energy.

A number of countries have already decided to cut off funding for coal-based projects. Thursday’s announcement goes even further.

This pledge by the U.S., the United Kingdom, Canada and others is the beginning of the end, said Rachel Kyte at Tufts University’s Fletcher School.

“It’s the sort of tip of the spear of the exit of public financing from fossil fuels,” she said.

The world has been slowly moving away from coal for a while now, “but this is the first time that a number of key countries have come together to say that their public finance cannot be used for the financing of fossil fuels,” Kyte said.

Instead, they’ll put that money into clean energy projects abroad.

“This is a very big move,” said Jake Schmidt with the Natural Resources Defense Council.

“Every dollar that we’re spending overseas on fossil fuels is a dollar that we could be spending and helping the same countries build the clean energy future that’s going to solve the climate crisis,” he said.

Thursday’s pledge represents about $18 billion a year in funding.

And while it’s a step in the right direction for the global energy transition, it won’t be nearly enough, according to Philippe Benoit at Columbia University’s Center on Global Energy Policy.

“We need to see increased financing for clean energy projects in developing countries,” he said, because new solar and wind projects are often more expensive upfront than fossil fuel projects.

Plus, “developing countries will continue to need electricity, and in fact, will need more electricity to support their poverty alleviation and growth aspirations,” Benoit said. “At the end of the day, we have a climate imperative. But there is also a development imperative.”

Meeting the world’s climate and development goals, he said, is going to require massive amounts of funding.