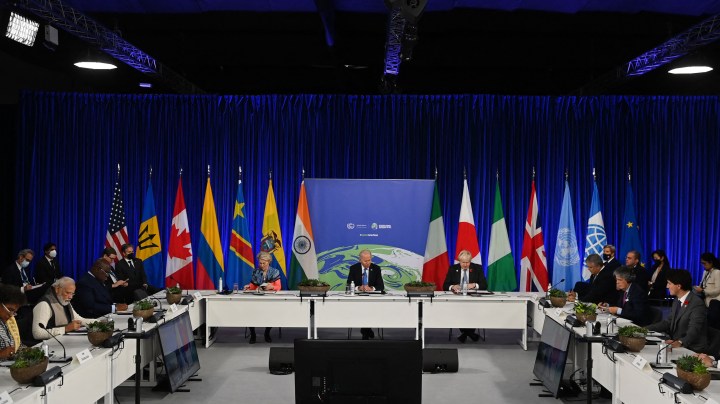 COPY
World leaders at the COP26 conference in Glasgow, Scotland, on Tuesday. Among other issues, they have discussed the need for additional investment in climate resilience for developing countries. Brendan Smialowski/AFP via Getty Images

World leaders at the COP26 conference in Glasgow, Scotland, on Tuesday. Among other issues, they have discussed the need for additional investment in climate resilience for developing countries. Brendan Smialowski/AFP via Getty Images
Listen Now

Wednesday at the United Nations’ COP26 climate conference was all about money — how countries will fund their commitments to reduce carbon emissions and limit global warming.

A key part of that is when and how developed countries are going to finally make good on their pledge to come up with $100 billion annually, from public and private sources, to help developing countries cut emissions and adapt to the climate crisis.

But what might it take to draw more private investment to climate change initiatives around the world?

Private companies are already investing billions of dollars a year in climate-related projects, much of it in wind, solar and other types of renewable energy. Still, a lot more private investment is needed, according to Sanjay Patnaik at the Brookings Institution.

“Because when we look at the scale of the climate problem, both mitigation and adaptation … the willingness to make money available by governments is not even close enough to what we need,” he said.

There are things governments could do to get companies to invest more, he said, like putting a price on carbon emissions and subsidizing the research and development of new technologies — which can be expensive and risky.

“Helping kick-start these R&D efforts through direct government subsidies can help sometimes,” Patnaik said. “And I think we’ve seen that, for instance, with the development of the COVID vaccine, where a lot of initial government money helps develop those very quickly.”

While private investment is a critical part of addressing the climate crisis, “it shouldn’t be used, and it can’t be used, to distract also from the need for public investments,” said Brandon Wu at the nonprofit ActionAid USA.

“Private investment is simply not going to reach the poorest and most vulnerable communities ecause there’s just not a return on investment,” he said. “You cannot make an investment case for investing in the resilience of a tiny rural community that has no money.”

Or helping it recover after a major hurricane or wildfire.