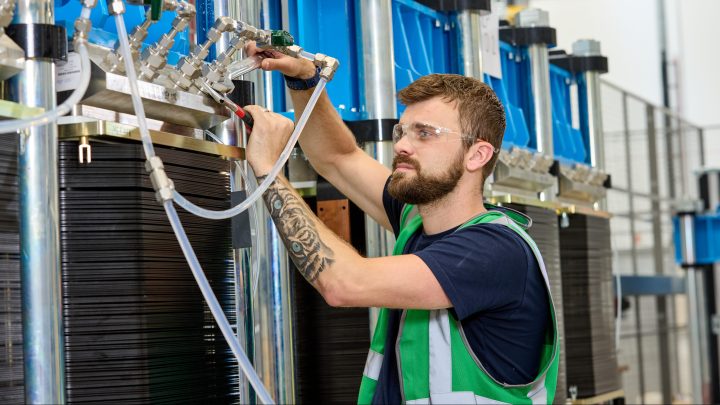 COPY
Building an electrolyzer, the machine splits hydrogen from oxygen creating what some regard as the "dream, green fuel." Courtesy of ITM Power

Building an electrolyzer, the machine splits hydrogen from oxygen creating what some regard as the "dream, green fuel." Courtesy of ITM Power
Listen Now

Green hydrogen has been dubbed the “dream, green fuel.” Created by electrolyzers that pass electricity — generated by renewable energy — through water, the gas is completely carbon-free.

The by-products from producing and burning it are oxygen and water. Prime Minister Boris Johnson is so enamored of the fuel that he has promised that the U.K. will become one of the world’s biggest suppliers — as big a producer of hydrogen as the Gulf state of Qatar is of natural gas.

That aim may not seem unrealistic, as the world’s largest manufacturer of electrolyzers, ITM Power, is based in the city of Sheffield in the north of England. If the scramble to generate green hydrogen is like an old-fashioned gold rush, this company is making the picks and shovels. And business is booming.

“ITM Power has grown very rapidly over the last couple of years,” CEO Graham Cooley said after a recent tour of his factory. “We moved from a valuation a couple of years ago of £100 million to a valuation today which is closer to £2.7 billion.”

The company is not actually making a profit at the moment, but Cooley said the pay dirt is in sight because the global demand for electrolyzers is likely to grow exponentially as the battle against climate change intensifies. He points out that the International Energy Agency estimates that if the planet is to reach net-zero carbon emissions by the middle of the century, it’ll need 3,500 times the green electrolyzing capacity that ITM Power is currently producing.

“The market growth is phenomenal,” Cooley said. ”The total value of that market could approach $2 trillion. And it’s only those companies that have the manufacturing capacity in place that will be able to service the huge demand for electrolysis which is on its way.”

Armed with cash reserves of more than half a billion dollars, the company is planning to expand production five-fold within the next three years and believes it’s well placed to maintain its lead as a global electrolyzer manufacturer.

“Yes, we do have competition in the world,” said commercial director Barry Cunliffe. “But we believe our technology is the best and we would hope to remain ahead of the game.”

But what will the world do with all this green hydrogen produced by electrolyzers?

The “dream, green fuel” has its limitations and certainly isn’t a panacea for climate change. It seems unlikely that it will play the dominant role powering passenger cars because battery technology already appears to be in the driver’s seat.

“Electric vehicles are already cheaper on a total-cost-of-ownership basis. And that’s going to continue into the future because batteries just keep exceeding our previous expectations for what they can do” she said.

Annex believes that hydrogen could come into its own in cutting carbon emissions in those parts of the transportation system that will be hard to electrify because they involve heavier loads and longer distances. The more powerful a battery is, the heavier it is and that will restrict the vehicle’s range.

“If we’re looking at heavier trucks, if we’re looking at maritime fuels and aviation, this is where hydrogen can play a role in transport because that’s where the limitations around batteries start to become critical,” Annex said.

ITM Power stresses that, initially, the most important market for green hydrogen will be heavy industry: cement, steelmaking and chemicals, for example. Decarbonizing the world’s industrial hydrogen alone would require 600 times the annual electrolyzer production of the Sheffield factory.

In addition, the company believes that electrolyzers will play a crucial role in making the renewable energy industry itself more viable. That’s because they can act as a storage facility, turning excess wind and solar power into hydrogen when the electricity grid doesn’t need it, rather than shutting down the wind turbines and switching off the solar panels.

The hydrogen can then be sold for industrial use, be funneled into natural gas networks, or even be converted back into electricity.

“The renewable energy companies then have two products to sell: electricity and hydrogen; electrons and molecules,” said ITM Power’s CEO Graham Cooley. “That overcomes the most significant barrier for renewable power: intermittency.”

While the U.K.’s lead in electrolyzer manufacture is a feather in its cap, it does not mean the country will necessarily become a leading producer of green hydrogen itself. Boris Johnson’s pledge to turn the U.K. into the “Qatar of hydrogen” isn’t a shoo-in.

“There are many countries in addition to the U.K. that are looking to become the Qatar of hydrogen,” explained Bridget van Dorsten, hydrogen research analyst with energy consulting firm Wood Mackenzie.

Van Dorsten told Marketplace that the biggest centers of green hydrogen production will be places where renewable energy is the cheapest. “There are definitely countries like Saudi and Qatar themselves who have lower cost of renewable electricity than the U.K.”

Reliable sunshine and regular trade winds in the Gulf apparently trump the U.K.’s abundant but relatively expensive offshore wind power. The “Qatar of Hydrogen” is more likely to be … Qatar.

But none of this should perturb the British company selling the equipment that transforms wind and solar into green fuel. ITM Power is confident that demand for its electrolyzers will soar around the world — along with its profits as the green hydrogen bonanza gets underway.

And it’s worth remembering: selling picks and shovels was the surest way to make money during a gold rush. 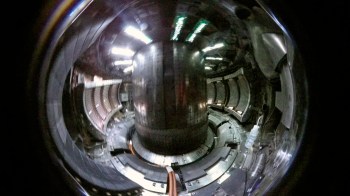