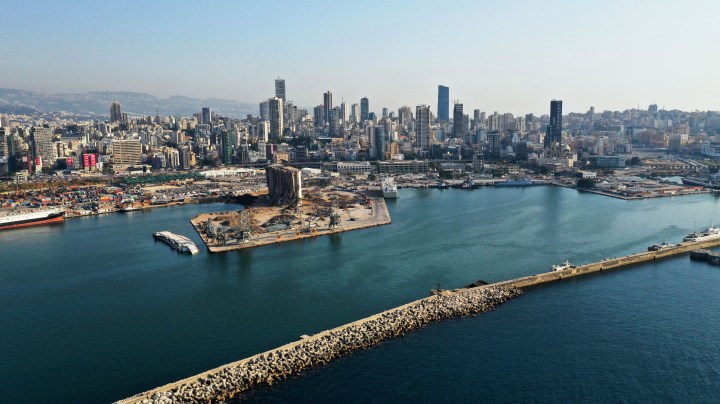 COPY
An aerial view of the damaged grain silos at the port of Beirut on Aug. 4, the first anniversary of the blast that ravaged the city. AFP via Getty Images

An aerial view of the damaged grain silos at the port of Beirut on Aug. 4, the first anniversary of the blast that ravaged the city. AFP via Getty Images
Listen Now

Drive down any main road in Beirut these days, and you’re bound to come upon a line of cars, barely moving, taking up an entire lane of traffic, snaking along for a block or even a mile. These are gas lines.

“I’ve been here since 6 a.m. to get this place in line, now it’s 11 a.m.,” said a sweaty and gray-haired Salim Al Arab from his station wagon, windows rolled down in the Beirut summer heat. One doesn’t use air conditioning when gas is this hard to come by.

Al Arab is at the front of a line that stretches well out of sight. It includes bus drivers and electricians, taxi drivers and delivery workers, all taking hours upon hours out of their day to get the gas they need to live their lives.

Gas, of course, isn’t the half of it. Inflation here reached nearly 160% in March.

“The prices are crazy,” said Ahmad Zaki from the side of the road next to another gas station. Zaki runs a mobile coffee shop out of the back of his motorbike. “One kilo of coffee costs me what I earn in a day. I barely make ends meet.”

I asked one baker for kanafeh, a syrup-glazed dish of fried cheese.

“We don’t make that anymore. The ingredients are too expensive,” the baker told me.

Then there’s the electricity. Those dependent on the electric grid get about an hour or two a day.

Lebanon’s electrical grid has been notoriously dysfunctional for many years, unable to supply 24-hour electricity for decades, but this is a new low. Those with money to spare have generators — generators that need fuel.

Vartan Chakrian runs a small shop in Bourj Hammoud, Beirut’s Armenian quarter. He moves and speaks slowly, as if to conserve energy. A small parakeet keeps him company while behind him stands a pile of Kleenex 7 feet tall. Why so much Kleenex? He cut down on perishable goods because the electricity cuts out or fries the refrigerator.

Of course, this economic crisis is just the baseline for all the other weights the Lebanese are enduring — the pandemic simmers in the background.

“I spent all my money on my brother last year,” Chakrian told me, his eyes suddenly becoming glossy. “He had COVID. It wasn’t enough. He died.”

Lebanon’s current crisis is possibly among the top three worst crises the world has seen in 150 years, according to the World Bank.

It is both simple and anything but.

Simple in that it was triggered by a straightforward phenomenon in economics: a “sudden stop” of capital. Flows into the country of foreign currency — dollars, euros — slowed and all but ground to a halt in 2019 and 2020.

Without enough dollars in search of Lebanese pounds, the market value of the currency plummeted. It lost 90% of its value in two years. Anything that had to be imported suddenly became expensive and hard to come by.

In Lebanon, a small country with an undernourished manufacturing sector, many things are imported: gas, medicine, food.

Cancer patients protested a few weeks ago that their medications were either unavailable or astronomical in cost. Jehan Saleh, from Michigan, is in Lebanon visiting family. She strolls down what was once a busy commercial street in Beirut known to everyone as Hamra.

Half the stores are shuttered, and you’d never guess it was once a packed commercial artery. She arrived with a suitcase packed full of supplies.

A suitcase full of medicines

The government has been subsidizing essentials like gas and medicine, but this led to smuggling of both abroad, where they could be sold for a higher profit margin. When the government announced it would be reducing subsidies, cases of stockpiling were reported as sellers wanted to wait until they could sell their goods for more later. Both phenomena made the shortages worse.

St. George Hospital sits close to the port where a massive explosion on Aug. 4, 2020, caused $15 billion worth of property damage and left 300,000 homeless. Its lobby is newly renovated, but some of the windows are still shattered.

“We used to have the best salaries,” Wafaa Maalouf, head of nursing, said. “We used to have an attraction to many nurses coming from different areas. Unfortunately, with the degradation of the financial situation in Lebanon, we are losing a lot of nurses.”

Transportation to the hospital has become expensive, rents have shot up and the value of salaries has dropped.

“So, I have around 96 resignations,” she said. “My staff used to be around 600. We are now around 500.” Patients are discharged only to find they can’t get the follow-up medications they need. Morale among remaining nurses is low.

The sudden freeze of foreign capital coming into Lebanon and the collapse of its currency are the tip of the economic iceberg.

Hezbollah’s leader, Hassan Nasrallah, has blamed the situation on what some here call a U.S.-led siege. The U.S. Caesar Syria Civilian Protection Act, threatening sanctions against those who help or work with the regime in Syria, has complicated the already difficult task of supplying Lebanon with fuel and electricity and has dissuaded some expatriates from sending money to Lebanon. But there are many more factors underlying Lebanon’s economic collapse, and they go back decades.

“Fifteen years ago, we were importing around $20 billion a year of goods. We only exported around $3 billion,” explains Kamal Hamdan, managing director of the Consultation and Research Institute in Beirut.

The outflow of currency was balanced by tourists who came to spend from the Gulf, Syria and Iran. It was also balanced by international loans, international aid and remittances from the millions of Lebanese living abroad, Hamdan explained from a dark and uncooled office room while a generator for a nearby hotel whirred in the background.

“The turning point was 2011,” Hamdan said. “The Arab Spring and the explosion of the antagonism between Saudi Arabia and Iran had repercussions on the political and economic relationship between Lebanon and Saudi and consequently all the Gulf area countries.” Aid from the Gulf slowed to a trickle by 2016.

Meanwhile, Lebanon’s government was running up debts, both domestic and foreign. The debt to gross domestic product ratio, on the decline until 2012, reversed and reached 150% by 2018.

“Public expenditures [went] from $6.8 billion in 2005 to $18 billion in 2018. We have seen the recruitment for political reasons of 31,000 persons in the public sector,” Ghobril said. “We have seen a decision to indiscriminately increase the wages and salaries of public sector workers and employees and retirees without taking into consideration that impact on public finances and on confidence.”

It began borrowing from commercial banks, which borrowed from their own depositors and clients. That bought a few years, Hamdan said. But eventually, the flows began to slow down again. With fewer dollars coming in, the central bank had less ammunition with which to peg the Lebanese pound to the dollar. Black market exchange rates emerged, revealing the actual value of the pound was falling.

Then in 2019, a series of shocks brought down the house of cards. In the financial world, Fitch Ratings downgraded Lebanon’s debt in August, a small Lebanese bank was blacklisted by the U.S. Treasury Department and an Israeli drone strike in a southern suburb of Beirut collectively rang alarm bells in the ears of investors.

“These three events together created panic and led to the turning point in the sudden stop of capital inflows,” Ghobril said.

In November 2019, Lebanon’s banks closed amid nationwide protests calling for the government to resign, further eroding confidence in the banking system. Desperate Lebanese tried buying up property or art during this period in an effort to preserve their savings.

Finally, in March 2020, the government defaulted on its foreign debts.

“That led to an almost complete halt to whatever capital inflows were still coming to Lebanon,” Ghobril said.

The consequences ricocheted through the banking system as banks limited people’s access to their accounts and forced the Lebanese to convert their U.S. dollar accounts at the old dollar rate. That effectively meant every depositor with dollars in Lebanon effectively lost 80% of their accounts’ value.

“They stole our money,” Laila Said said angrily. She lives in a suburb and was making a rare trip downtown to run errands. “How can you have earned money since years and years and someone is taking your money now?”

But Lebanon, like most places, is nothing if not a country of contradictions. There are segments of the economy that are managing better — affluent and running on dollars brought in by tourists and expatriates.

In the mountains outside of Beirut, wedding music can still be heard through the valleys. At a waterfall-side restaurant in Lebanon’s Shouf region, a couple dines on a floating platform in a stream-fed pool. Entrance is $20.

The U.S. and France have offered hundreds of millions of dollars’ worth of humanitarian relief. But recovery would require loans in the range of billions, economists say.

The IMF has offered such loans on condition of reforms, but the government has been unwilling or unable to agree to them. Up until recently, Lebanon didn’t have a fully functional executive branch — the last one resigned in August 2020 after the massive explosion at Beirut’s port but remained in a caretaker capacity. A new government was announced in earlier this month and is promising to tackle the crisis.

For some, it’s too little, too late.

“For three weeks, I couldn’t find the most basic medicine,” he told me. “It was the last straw. It’s become unlivable. So, I’m going to leave.” He’ll go to Turkey, he thinks.

He will leave behind a country that — to many — is becoming unrecognizable.