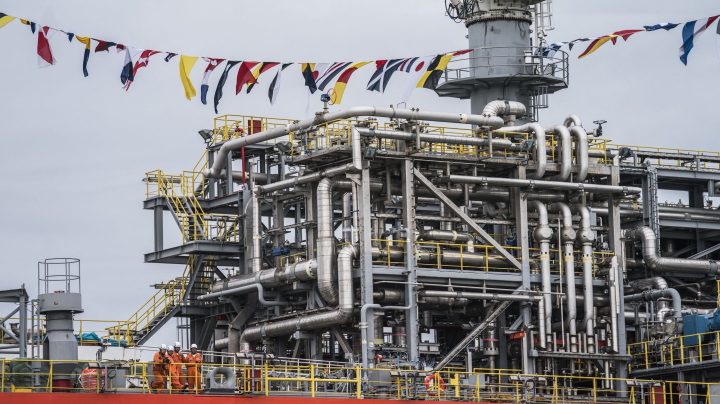 COPY
European countries are using a range of strategies to decrease their reliance on Russian natural gas. In the Netherlands, above, a regasification unit converts liquefied natural gas so it can be fed into the country's natural gas network. Siese Veenstra/ANP/AFP via Getty Images

European countries are using a range of strategies to decrease their reliance on Russian natural gas. In the Netherlands, above, a regasification unit converts liquefied natural gas so it can be fed into the country's natural gas network. Siese Veenstra/ANP/AFP via Getty Images
Listen Now

A few days ago, we reported on what happened when the price of natural gas in Europe spiked after the Russians announced they wouldn’t reopen the Nord Stream pipeline. That shock had European utilities reeling as they scrambled to put up enough collateral to keep trading on energy markets.

But since then, prices have swung the other way: The cost of European benchmark natural gas has come down by about a third. ​It’s still very expensive compared to what it cost before Russia invaded Ukraine, but it’s no longer at the level that’s been driving inflation across the European economy.

The recent sharp decline in natural gas prices is one sign Europe may be getting a handle on its Russia-induced energy crisis, said Capital Economics’ Edward Gardner.

“The European Union’s gas storage levels are at around 85% of capacity,” he said. “So it could well be that markets are pricing in that Europe might be better prepared than it once was.”

European countries have been increasing non-Russian supplies of natural gas from Norway and the Netherlands, and lining up more shipments of liquified natural gas from Africa and Canada. Germany and Italy, traditionally the heaviest users, have cut their reliance on Russian energy.

Weather may also help by tamping down demand this winter, which is expected to be mild by recent historic standards.

But risks abound for Europe.

“The overall situation is bad,” said Patrick Honohan, former governor of the Central Bank of Ireland, and now a fellow at the Peterson Institute for International Economics.

“To what extent industrial producers, households, in various countries can substitute away from natural gas that used to flow from Russia, and can cope with the rising and the high costs of not just natural gas, but oil and other energy products,” Honohan said.

The overarching unknown, he said, is Russia’s war in Ukraine.

“We don’t know how long this war is going to go on, and to what extent an end to the war will lead to a reversal in these spikes of energy prices,” Honohan said.

But he said one thing’s clear: Russia’s earning so much selling its oil on global markets, it doesn’t really need to resume selling its natural gas to Europe any time soon.