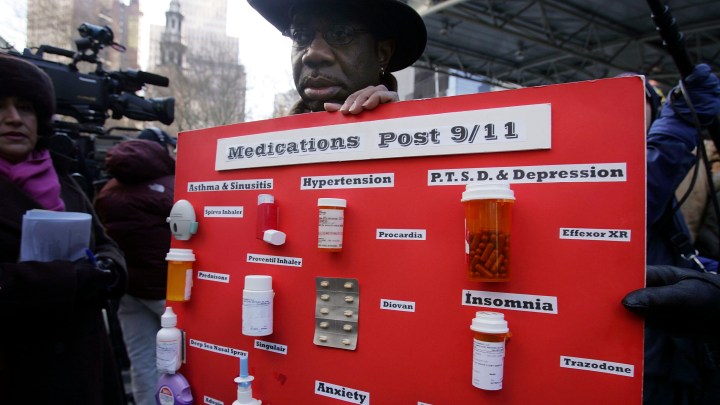 COPY
In 2007, paramedic Marvin Bethea, a first responder on 9/11, displayed the medications he had to take in the aftermath. Spencer Platt via Getty Images
The 9/11 Legacy

In 2007, paramedic Marvin Bethea, a first responder on 9/11, displayed the medications he had to take in the aftermath. Spencer Platt via Getty Images
Listen Now

Two federal funds established after the terrorist attacks of Sept. 11, 2001, have paid around $12 billion to first responders, survivors and families of those who died or became ill as a result of the devastating event.

Claims from survivors have been increasing in recent years — many from people who’ve been diagnosed with cancer. Two decades on, there are still significant ongoing health costs connected to that day.

Michael O’Connell rushed to the World Trade Center in lower Manhattan as a firefighter on 9/11 and spent the next few weeks working at ground zero.

Five years later, he got sick.

New Year’s Eve. He went to bed that night feeling healthy, he said, but when he woke up the next morning, “I literally had swollen limbs, swollen ankles. All my joints were inflamed. My body kind of blew up to, like, twice the size it was.”

A pulmonologist figured out that he had a rare autoimmune disease called sarcoidosis that was attacking his skin and joints. The doctor told him he got it from breathing in toxins.

“The material that the responders and survivors were exposed to when the towers collapsed was quite toxic,” said Dr. Michael Crane, who treats a lot of 9/11 first responders through the World Trade Center Health Program clinic at Mount Sinai in New York.

“I mean, it’s a huge, huge burning building collapsing. Everything inside is burning, and it collapses down into a pile and then an enormous dust cloud,” he said.

A lot of firefighters, police officers and others at ground zero started getting sick almost immediately.

First with what they called the World Trade Center cough. Then, post-traumatic stress disorder and depression. Eventually, years later, it would be cancers.

“This exposure … has a really, really long tail,” Crane said.

Anyone who develops an illness linked to 9/11 can get free health care through the World Trade Center Health Program.

But there are likely a lot of people dealing with 9/11-related health problems, said Michael Barasch, a lawyer for 9/11 survivors. That could include people who lived, worked or went to school near the WTC.

“While over 80% of the responders like the firefighters, cops, sanitation workers, they have enrolled in this free health program … less than 10% of the nonresponders have enrolled,” Barasch said.

Both the World Trade Center Health Program and the Victim Compensation Fund have been reauthorized through 2090. But advocates say more funds are needed.

The 9/11 Legacy
Tags in this Story
Share this Story