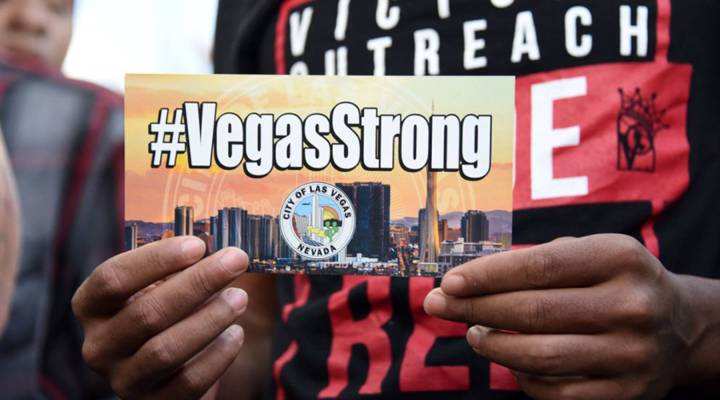 COPY
People attend a candlelight vigil at Las Vegas City Hall October 2, 2017, after a gunman killed at least 58 people and wounded more than 500 others when he opened fire on a country music concert in Las Vegas, Nevada late October 1, 2017. ROBYN BECK/AFP/Getty Images

People attend a candlelight vigil at Las Vegas City Hall October 2, 2017, after a gunman killed at least 58 people and wounded more than 500 others when he opened fire on a country music concert in Las Vegas, Nevada late October 1, 2017. ROBYN BECK/AFP/Getty Images
Listen Now

In the wake of a mass shooting, victim needs can range from intensive medical care to figuring out how to reclaim personal items, like a wallet and car keys, from the crime scene. Supporting victims through their short- and long-term recovery can be an ongoing challenge for communities, many of which have never had to deal with a tragedy of this nature.

Donations: Who gets what?

Since the mass shooting at a country music concert in Las Vegas last October, people and companies have donated more than $22 million dollars for victims and survivors through the Las Vegas Victims’ Fund. As far back as 9/11, there have been similar outpourings. For example, after the Boston Marathon bombings donations topped $80 million dollars. It’s just one source of funding for victims – there are government programs too — but deciding how to divide up donations is becoming, unfortunately, a common challenge for communities.

While $22 million may sound like a lot of money, there were 58 people killed in Las Vegas, more than 500 wounded, and roughly 22,000 in attendance at the show.

In December, the Las Vegas Victims’ Fund finalized its criteria for giving away the money its raised. The highest amounts will go to the families of those killed, or survivors with permanent brain damage or paralysis. Other funds will go to victims who were hospitalized with physical injuries. A third tier will go to victims with physical injuries, but who weren’t hospitalized. Those attendees struggling with the mental trauma of the shooting alone – without physically injuries – won’t be eligible for funding.

“Usually mental injury, however reasonable and however legitimate, is ineligible for compensation because there’s not enough money to pay for it,” explained Kenneth Feinberg, a lawyer who specializes in victim compensation. Feinberg has administered funds for numerous other tragedies – from 9/11 to the Sandy Hook Elementary School shooting.

“You use hospitalization as a pretty good barometer of seriousness of injury,” he said. “Everybody who falls within that category of hospitalization stay gets the same amount of money.”

For example, after the Pulse Nightclub shooting in Orlando, Florida, the OneOrlando Fund, when Feinberg administered, did allow people who were trapped in the nightclub, but didn’t sustain physical injuries, to receive funds from the donation pool.

Disbursements typically don’t take into account personal details besides the severity of the injury, for example, if the person needs the money for medical care. Often, victims get a lump sum and can use the money for whatever they want.

“This is all cold math, that’s what this is — very efficient, very streamlined, and very quick,” Feinberg said, though he stressed the process is always emotionally difficult, both for the victims and those administering the funds.

“You are dealing with people whose lives have been destroyed and money is a pretty poor substitute for loss.”

Other support may also be available through various nonprofits, such as the Red Cross or groups that specifically support victims of crime. Additionally, each state administers its own victim compensation fund, though eligibility criteria and services offered will vary by location.

The biggest funding categories typically include medical care, mental health care, and funeral costs, according Allison Turkel, a deputy director in the Department of Justice’s Office for Victims of Crime.

A few states also offer funding for caregiver expenses and some victims may be able to get repaid for lost wages as well. This is funding that’s supposed to fill gaps that insurance and other programs don’t cover.

But every state is different and Turkel said sometimes it can’t cover everything.

Turkel considers getting victims the help they need to still be an emerging field.

“We’ve had really a concentrated amount of these large-scale mass violence incidents … in the last few years, so we’re learning from our past experiences,” she said.