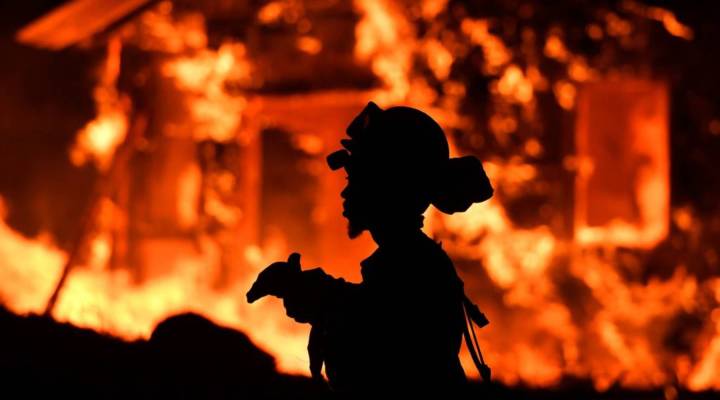 COPY
An inmate firefighter monitors flames as a house burns in the Napa wine region in California on October 9, 2017, as multiple wind-driven fires continue to whip through the region.  JOSH EDELSON/AFP/Getty Images

An inmate firefighter monitors flames as a house burns in the Napa wine region in California on October 9, 2017, as multiple wind-driven fires continue to whip through the region.  JOSH EDELSON/AFP/Getty Images
Listen Now

After a disaster, a major network of disaster counselors and mental health professional spring into action. Their task? Aid people with the sometimes long and invisible recovery that takes place following a traumatic event.

It could be after a natural disaster, like a hurricane or wildfire. Or a tragedy, like a mass shooting or crime. Either way, there’s an important personal recovery that needs to take place — and people whose job it is to help.

Psychologist James Halpern was a first responder at both 9/11 and the Sandy Hook school shooting, which left 20 children dead. He’s co-author of the book “Disaster Mental Health Interventions: Core Principles and Practices.” He’s also a professor emeritus and founding director of the Institute for Disaster Mental Health at SUNY New Paltz.

Halpern joined Marketplace Weekend host Lizzie O’Leary to talk about the role of mental health professionals following a disaster.Below is an edited transcript of the conversation.

Lizzie O’Leary: We are reflecting on the five year anniversary of the Sandy Hook shooting. That’s something you responded to. Can you walk us through what happens as a mental health first responder? You know, in that case what do you do?

James Halpern: I was with the families on the second day of the event. There was considerable fear and considerable chaos. We tried to provide some calm and safety. But they also asked us questions like, “How could this have happened to me? How could this have happened to my wonderful child?” And those are not real questions for us counselors. Those are cries or laments. What we can do is offer kindness and compassion and support. But some of the questions they asked, which had to do with how they supported their other children, were real questions. About whether or not the kids could watch these events on TV. And the answer is no. Whether or not it was good for those young children to be interviewed by the press. The answer is no. So, some combination of what might be considered crisis counseling and compassion and support.

Halpern: Sorry I’m laughing, but yeah, I mean disasters are so common and getting more common, it seems. You know, the United States, people don’t appreciate, has the most extreme weather in the world. So in addition to the kind of floods and fires that are most typical, we have a hurricane season. We have a tornado season. We have a wildfire season that seems to be expanding. Of course, we’ve got earthquakes, explosions, transportation accidents, plane crashes, epidemics, anything that involves considerable human suffering beyond a person.

O’Leary: Listening to the breadth of what you’re talking about, what does it cost to provide mental health care for so many people in such a variety of situations? And who pays for that?

Halpern: In the early stages of disaster, crisis counseling is typically free. There are 5,000 mental health professionals deployed around the country by the Red Cross. These are psychologists, social workers, mental health counselors, who give up their time and energy to provide that kind of pro bono service. There’s also county, state, federal workers who, similarly, can be at shelters or family assistance centers. Now, over time some significant minority can develop long-term symptoms. And those folks are treated by professionals with health care, Medicare, Medicaid, private insurance. And depending on the nature of the disaster it can be supported by the federal government. For instance, if the disaster was a crime, like the Las Vegas shooting or 9/11, then there’s support from crime victims services for long-term care.

O’Leary: You know, I’m thinking about Puerto Rico. I just came back from a trip reporting on the island and that’s a place with significant devastation. I would imagine that the kinds of mental health services required over time change dramatically as we move farther out from the event itself.

Halpern: Most folks experience significant but transient symptoms. They’re OK and don’t need that long-term help. On the other hand, there’s some considerable research from the gulf oil spill where it leads to long-term economic dislocation, job loss. You see significant depression that needs to be addressed.

O’Leary: There’s a study from the National Institute of Mental Health that says it would have cost about $12.5 billion to provide what they call “comprehensive mental health care for 24 months” to the people affected by Hurricanes Katrina and Rita. Make the economic argument for me, the cost benefit analysis, of why that money is worth spending on mental health.

Halpern: These are disaster survivors who certainly bear no blame for being in the middle of these kinds of events. They are suffering. There is job loss. And those treatments work. We can reduce, then, long-term problems in substance abuse, in family violence, and family conflict, and individual suffering. There’s enormous benefit that we get when people are functioning effectively.

O’Leary: Do you think as a country we have made any collective strides in understanding that mental health is something worth spending money on?

O’Leary: Is it hard to find the people who need help, after all a disaster can scatter survivors all over the place?

Halpern: Yes. I think that we could do better at providing more comprehensive screening, which would not be very costly. And there are, in fact, check lists where we can identify folks who are likely to have serious mental health problems.

O’Leary: What’s the impact on the people who do this work? I would imagine this is not easy.

Halpern: There are of course the obvious physical hazards. But for all responders, including mental health counselors, there’s listening to stories of trauma repeatedly, which can result in compassion fatigue. Or burnout. Or vicarious trauma, that you can begin to feel traumatized yourself just by hearing those stories secondhand. And, again, I think that that puts all responders at risk, and why it’s so important for all of those responders, and all of us as counselors to have very careful self care plans.