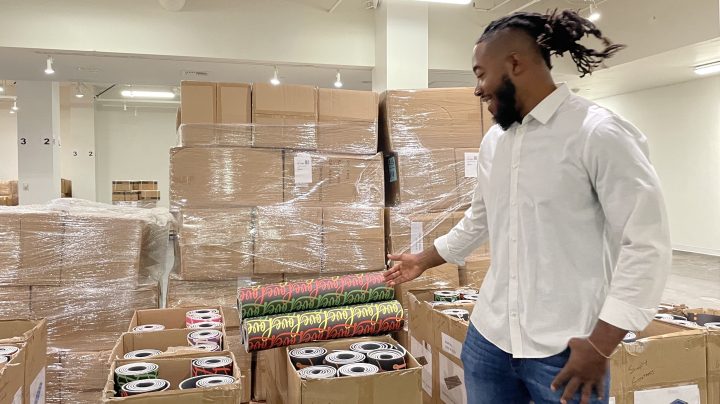 In March 2020, as live events were canceled across the country, Wayne Fernandez, the owner and general manager of Magic Box LA — a convention center and events company in Los Angeles — needed to pivot.

“Within a week, I saw a year and a half of the business just disappear in the air and I was terrified,” he said. “I thought to myself, ‘This is it, I’m going to go bankrupt.’”

But thanks in part to a company called Flowspace — one of a handful of entrants in the emerging on-demand warehouse industry — Magic Box LA’s newly vacant event space rapidly transformed into a warehouse and fulfillment center for retailers and e-commerce companies experiencing increased demand during the pandemic.

“I’d already sort of touched upon the possibility of going into fulfillment, but immediately shifted gear because, if anything, I’ve got so much space here,” Fernandez said. “And then serendipitously, I connected with Flowspace … and we transitioned in less than three months.”

Flowspace itself does not own any warehouses or provide any packing services directly. It’s one of a growing number of companies trying to make it easier for brands to secure warehouse and fulfillment services without getting locked into long-term contracts.

For small companies just starting out, on-demand warehousing can be an affordable alternative to traditional third-party logistics services. For warehouse operators, becoming part of a network like Flowspace’s can make it easier to fill unused spaces.

“They provided the software as well as the sales pipeline,” said Kunal Gupte, general manager of Shipfront, the logistics company he and Fernandez co-founded to fill Magic Box LA’s unused event space. “Without them, it would have been really hard for merchants to find our space quickly.”

One of those merchants was Karlton Frazier, co-founder and CEO of The Manifest Company, which makes yoga mats with printed designs.

“We’re a small business,” he told “Marketplace” host Kai Ryssdal. “We don’t need a lot of space. We need what we need.”

Frazier said he pays $265 per month, plus a per-unit fee based on how much inventory The Manifest Company is moving, for a space in Shipfront’s warehouse and use of Flowspace’s platform. If at some point he needs more space, even just temporarily, he can book that through Flowspace, as well.

“We were looking for something that’s a la carte … so we’re paying for what we’re using rather than just paying for a space,” he said. “So, Shipfront and Flowspace are pretty much integral to my business, at this point.”

As companies attempt to build flexibility into their supply chains and adapt to a world in which one and two-day shipping have become standard, adoption of on-demand models of warehousing and fulfillment have accelerated.

“Over the last year, there have just been hundreds of 1000s of businesses that have started to sell products online,” said Ben Eachus, Flowspace’s co-founder and CEO. “And ultimately, getting that product to the customer starts with fulfillment and warehousing.”

Seattle-based Flexe, which pioneered an Airbnb-like on-demand warehousing concept in 2013, raised $70 million in new funding last year. Stord, another one of Flowspace’s competitors, announced a $65 million investment in 2021.

Flowspace said the number of orders shipped through its platform has increased tenfold since the pandemic began.

“With the advent of Shopify and other platforms, it’s never been easier to start an online store, but it’s actually never been harder to get your products to an end customer faster,” Eachus said. “Ultimately, our goal is to democratize logistics and help these businesses actually meet the increased expectations of their customers.”

(August. 25, 2021): This story has been updated to clarify that Flowspace provides indirect packing services.