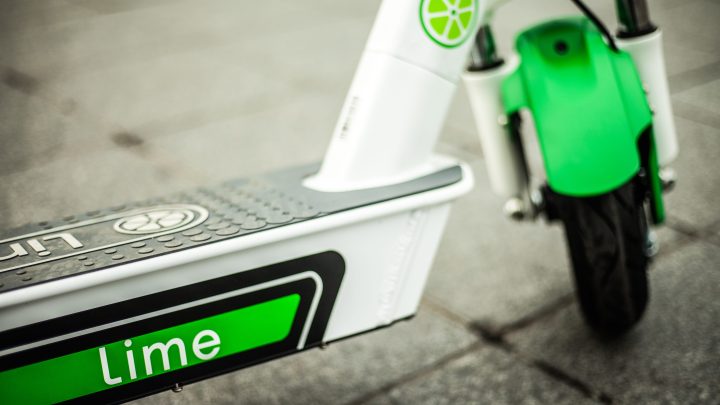 COPY
The Lime logo on a scooter. CEO Wayne Ting says users have been taking longer trips in residential neighborhoods. Courtesy of Lime

The transportation industry may be one of the hardest hit by the COVID-19 pandemic. Gasoline and oil sales plummeted, flights were canceled, but what about micro-mobility? That’s the name for the industry behind shared bikes and scooters found in cities around the globe.

According to a new report released by the micro-mobility company Lime, demand has been rising since the pandemic began, and rider behavior has changed drastically. Because much of the workforce works from home, the company has moved bikes and scooters away from business districts, now focusing on residential and suburban travel.

Lime CEO Wayne Ting spoke with Marketplace host Kai Ryssdal about what’s behind the boost in users and how the company plans to weather the economic downturn. The following is an edited transcript of their conversation.

Kai Ryssdal: So you guys have some visibility into sort of real-time economic data, which is why we wanted to get you on the phone. Because you know when people are using the scooters and the bikes, and you know when they stopped, and where I want to start is what it looked like at the beginning of this thing when people, I would imagine, stopped in those urban areas near offices using your products. What did you see?

Ryssdal: When did you see things start to pick back up in a meaningful way?

Ting: You know, around early May, some of the cities were exiting the shelter-in-place and what we saw was first going to local shops and restaurants and grocery stores, and a lot of interesting trends around longer trips, and more new use cases that we didn’t historically see on micro-mobility.

Ryssdal: I want to talk about a couple of those because they’re completely fascinating and a new report you guys have out but one of the things that caught me there’s a series of maps in this report, and what you all are seeing, and please correct me if I’m wrong, is less traffic in dense urban cores and more spread out toward and approaching suburbs, right?

Ting: Absolutely. You know, pre-COVID a lot of our trips were in downtown financial districts, you know, of course, folks are oftentimes using scooters as a first-mile, last-mile complement to public transit, but what we’ve seen instead is a really dramatic surge and longer trips in residential neighborhoods. We think because they’re taking it end to end so it’s no longer a first-mile, last-mile complement. What they’re doing is they’re taking it from their home all the way to the grocery stores.

Ryssdal: When you say “longer,” you mean longer distance and longer time too, right?

Ting: Yeah, so we’re seeing about a third longer distance, and time. And people take micro-mobility for joyrides. We see people start at their home, they go on a 30- or 40-minute trip, and they end up in the same location. And what we think is happening is people want to be outdoors, and they’re not quite sure how to be outdoors while observing social distancing. But they want to get the sun, they want to get the air, and they find bikes and scooters a really good way to do that.

Ryssdal: We don’t know what the future of work is going to look like, right? But what happens if we don’t, on a large scale or even a medium scale, go back to office life as we knew it? What’s that going to mean for Lime?

Ting: We already see some of this shift, but in many of these places, it’s been overwhelmed by a huge surge in trips, running errands, joyriding, visiting friends. In fact, one of the things most interesting when we’re looking at our data is that many of them are the places hardest hit by COVID. So, Korea, Italy, we’re hitting all-time record trips. When we talk to our riders, what we’re hearing is that they’re much more conscious about finding something that is safe, that is social distancing, and when they leave their homes to do a variety of things, even if it’s not going to work. We certainly know that many of you are looking at Lime and many more people are going to in the future.

Ryssdal: Last question, and then I’ll let you go and it’s about the company itself. You are the third CEO Lime has had in the three years it’s been around. We are in the middle of a big economic downturn. For all the success that your company seems to be having, how are you going to pull this company through? Are you just going to keep on keeping on?

Ting: Yeah, I’m the third CEO in a very relatively young company, and I take that responsibility very seriously. I do think we actually were originally expecting to be profitable this year. COVID-19 has pushed that back. We’re now expecting to be profitable for the year 2021. And hopefully if we do all those things, Lime will be around for a long time and hopefully I’ll be a CEO for a little longer.