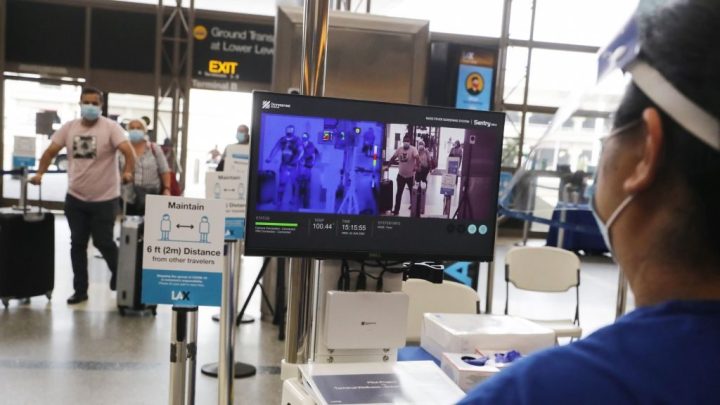 Travelers walk past a system of thermal imaging cameras looking for fevers, part of a test at Los Angeles International Airport in June. Mario Tama/Getty Images

The pattern is pretty much the same across airports in the United States: Air travel nosedived in March in response to the coronavirus pandemic and passenger volumes hit rock bottom in mid-April. Since then, more travelers are taking to the skies, but an updated analysis of screening data from the Transportation Security Administration by APM Research Lab shows that, across the nation’s 20 busiest airports, the number of travelers being screened for outgoing flights remains at jaw-dropping lows.

Over Memorial Day weekend, at the end of May, the average number of passengers who passed through security checkpoints at most of the busiest airports was less than 20% what it was February, before the pandemic. At four of those airports — San Francisco International, Newark Liberty, Logan International in Boston and John F. Kennedy in New York — the outgoing traffic was less than 10% what it had been in February.

“We’re seeing an unprecedented shock to air travel, not even matched by what we saw after 9/11 and the Great Recession combined,” said Paulos Lakew, director of airport finance and economics at Unison Consulting, which advises airports on operations.

Air travel ground to a halt in the spring because of three factors: travel restrictions, social distancing and people simply not wanting to fly. Because those three factors cut so widely, its unsurprising that many airports across the U.S. followed the same basic trend line, Lakew said.

However, the nationwide lockdown and the public’s newfound fear of flying only account for part of the slow recovery. The sudden upheaval has also changed the reasons that travelers — particularly those traveling on business — have for getting on a plane.

“For the last three, four months, what we’re seeing is that we continue to function in some limited capacity without actually physically traveling,” Nick Vyas, a professor of global supply chain at the University of Southern California’s Marshall School of Business, said. “We’re getting used to adopting virtual working.”

The key paradigm shift for businesses, particularly multinational groups and others that previously relied heavily on in-person meetings, will be reclassifying essential and nonessential trips, Vyas said.

“Approximately 70% of the travel that would have been labeled essential before COVID can now be reclassified as a nonessential,” he said. “That is a huge number.”

Vyas gave a personal example to illustrate this: He said that USC and several other universities have canceled faculty business trips for the rest of 2020.

A report published by the U.S. Bureau of Transportation Statistics in 2005 concluded that it took almost three years for passenger volumes to recover after the September 11 terrorist attacks. Lakew noted with some optimism that in the current landscape, passenger volumes nationwide have already rebounded to 25%, just three months after lockdown measures became widespread across the U.S.

“However, because of the current rise in COVID-19 cases and hospitalizations in the country, it’s likely that the recovery of U.S. airport traffic will continue being relatively slow,” he said.

Curious to see how your local airport has fared during the pandemic? Start typing the name into our tool below to select any airport in the U.S. and visualize the data. For more analysis, visit APM Research Lab.

Search for an airport

Total number of passengers screened by TSA at U.S airports