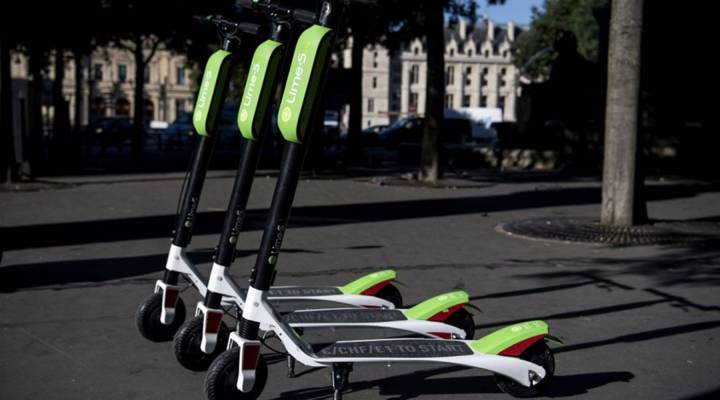 COPY
Electric scooters of the US company Lime are pictured on a sidewalk in Paris during their launching day on June 22, 2018.  CHRISTOPHE ARCHAMBAULT/AFP/Getty Images
Marketplace Tech Blogs

Electric scooters of the US company Lime are pictured on a sidewalk in Paris during their launching day on June 22, 2018.  CHRISTOPHE ARCHAMBAULT/AFP/Getty Images
Listen Now

On Monday, Uber announced a partnership with the electric scooter rental company Lime. Uber already owns Jump Bikes, an electric bike startup. Lyft just bought a bike rental company as well. All of these moves are about creating one-stop shopping for all kinds of transportation — and also about solving a pretty basic problem. The average cab ride is less than three miles, and using a car to make that trip is expensive and inefficient, especially in traffic. Hence this new investment trend in what’s being called micro-mobility.

Ralph Buehler is a professor of urban affairs and planning at Virginia Tech. He spoke with Marketplace Tech host Molly Wood about what he calls multimodality. The following is an edited transcript of their conversation.

Ralph Buehler: Multimodality refers to the concept of the same individual using different modes of transport during a day or during a week. This means that for some trips you may drive, for other trips you may use public transport, or you may walk, or you may ride a bike. So, you’re not mono-modal, which would mean you use one mode for all trips, but your multimodal, so you’re using multiple modes of transport during a day or week.

Molly Wood: We’ve had all of this movement toward ride share and self-driving cars, and suddenly we’re seeing this huge increase in investment in the U.S. in electric bike tech and scooters. Why do you think that’s happening now?

Buehler: I think we’re at the cusp of a couple of revolutions in the transportation sector. Electrification is part of that, so we see that with the e-bikes and the scooters. At the same time, we have sort of a revolution with these shared vehicles, and then we have the advent of the autonomous vehicles. Together it’s sort of the beginning. What we’re seeing now, this will evolve further and maybe all become one big mobility we purchase depending on the trip we want to take.

Wood: Like we’re saying, there’s been this big move toward different types of car-based transportation, and the sort of scooter and bike part is seen as solving this “last mile” problem. As cities get bigger, as the roads get filled up with more cars, how important is two-wheeled transportation or three wheeled or one wheel?

Buehler: I think we’re seeing a big shift, or have seen a big shift in U.S. cities maybe since the early 1990s. Cities started to provide more transport options. Before that it was mainly providing for cars, car parking, bigger highways, more lanes, but over the last 20 years or so we’ve seen cities provide more bike lanes and other accommodation for cyclists. And we also see that people who are moving into cities, or back into cities, want these options, and that’s one of the reasons they move back to the city.

Wood: How important will that government investment part be?

Buehler: I think it’s sort of a two-sided sword, because on the one hand, you need government investment and regulation. Just letting the market run its course alone may lead to adverse effects. But at the same time, you don’t want to be too fast or too quick and overregulate, because if you do that you could stifle innovation. Government’s role will be key, because most of the roadways are owned and managed by government. Different levels of government of course, but government involvement in this will be key.

Wood: Is the accountability also important that this technology provides? It’s easy to know who took the scooter, and the scooter knows where it was left, and there’s sort of this breadcrumb trail all along.

Buehler: The accountability is key, especially when you look at the history of bike sharing. It started in the 1960s, ’70s in the Netherlands. Originally, they just had these bikes that were painted white, and they spread them all over Amsterdam, and they disappeared very quickly and were vandalized. And there was no tracking at all. You could not know who had the bike or what happened to them. And then there was a second generation mainly in Denmark where you had a 10 krone coin that you put in the bike to unlock the bike. Then you could ride around and bring it back. But still no accountability, we didn’t know who was on it. And then the big revolution came with these docking station-based bike share systems that are all over the U.S. now, where you could actually track the person with a credit card and other information who had the bike. That’s definitely crucial.