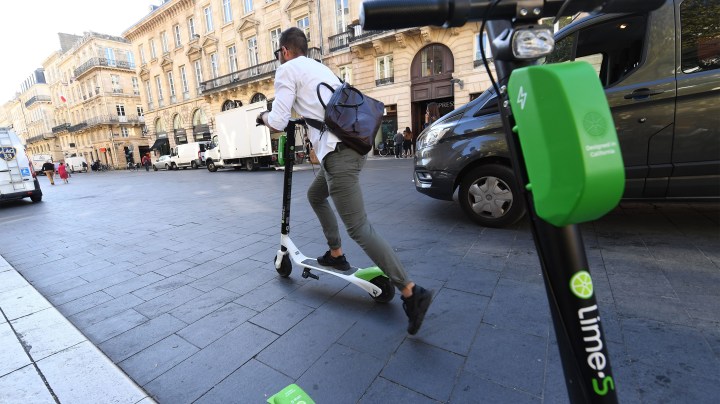 Lime, the largest scooter sharing company in the world, is pulling out of 12 cities worldwide, including Atlanta, Phoenix, San Diego and San Antonio in the U.S. The company is also laying off about a hundred employees, or 14% of its workforce. Competitors Bird, Scoot, Lyft and Skip have also downsized over the last year as part of efforts to become profitable.

Shared electric scooters zoomed onto the scene with a lot of hype a couple of years ago, taking over cities around the world, some seemingly overnight. Bird and Lime were both quickly valued at more than $1 billion.

But reality has started to set in, according to Sam Abuelsamid, a mobility research analyst with Navigant Research.

“Anybody can pick one up and toss it into a river.”

“We’re absolutely at an inflection point with this,” Abuelsamid said, adding that the rocky IPOs of Uber and Lyft last year sent an important message: profitability still matters.

Scooter rentals have been estimated to lose about 10 cents per mile, largely due to the high the cost to charge the scooters, and to replace them when they’re broken or lost.

“Anybody can pick one up and toss it into a river,” Abuelsamid said.

Vandalism notwithstanding, he said, costs should eventually go down as companies develop more durable scooters with batteries that can be swapped out.

But they’ll also need to expand their ridership beyond hardcore tech-savvy fans, said Susan Shaheen, a professor of transportation engineering at UC Berkeley.

“It’s a certain type of individual who has those resources and means,” Shaheen said. And it’s hard for scooters to compete for more price-sensitive consumers when options like public transit and car use are heavily subsidized.

According to Juan Matute, director of the UCLA Institute of Transportation Studies, the markets Lime is pulling out of offer evidence of a physical obstacle to widespread scooter adoption: they’re all Sunbelt cities that revolve around cars.